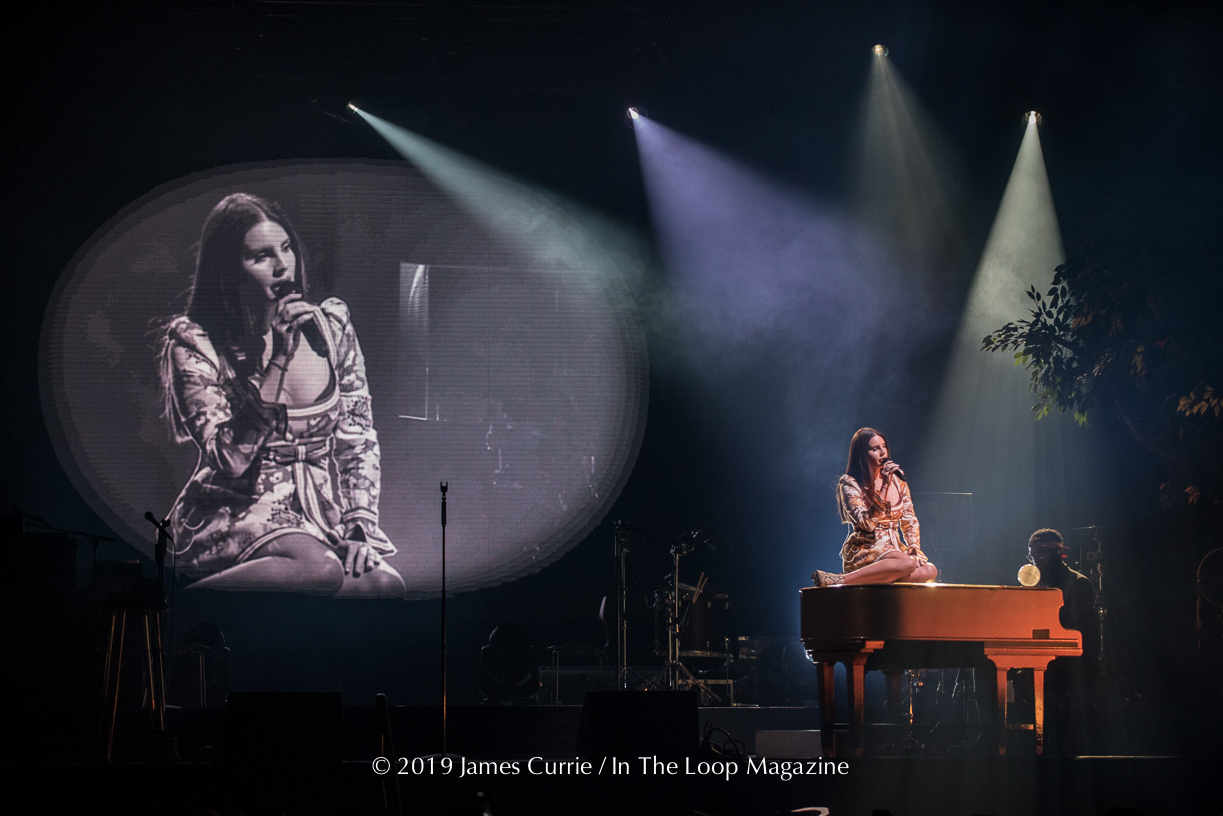 What’s a 63-year-old former heavy metal magazine editor doing in line outside a century old ballroom swollen full of siren worshipping teens and twenties? In all candor, I asked (well, kinda begged) for this assignment. Why? Because Norman Fucking Rockwell! is a picturesque, poetic post card and melodic masterpiece. And frankly, Lana del Rey blows all seven of my chakras. So sure, the kids wrapped around the block in the freezing cold are all worked up, but no more so than your humble middle-aged narrator who’ll soon be standing at the sound board, dead center, poised for transcendence.

As I wait at the box office window for my ticket, I overhear a nearby conversation. “We got scammed!” weeps a misty-eyed fair maiden standing behind me. Dressed to chill in her finest Woodstock era threads, she and her BFF drove all the way from Three Lakes Wisconsin for this rare, intimate theater appearance of the freshly crowned Rolling Stone cover girl in town for one special performance to promote the critically acclaimed NFR. “Why do people lie and steal?” queries the innocent fan, dreams shattered, mascara running, hopes failing. “We drove almost seven hours to see Lana. She’s the light of our lives.” Sigh sigh. Bang bang. Kiss kiss.

“I’m basically doing what Lana tells me.” whispers Lucy Dacus, guitar strumming opener and obvious gal pal (how else could she land so sacred a spot on the bill?) before busting into a short but lively set that features a delicious cover of Springsteen’s “Dancing in the Dark.” As the ballroom floor swells toward airtight capacity, I secure my spot near the mixing board with the railed off sanctuary of sound folk and spontaneously engage two west of Brooklyn babies sporting feathers in their hair and clearly high on hydroponic weed. Fifteen minutes until the headlining heroine materializes, Ellen and Emily share their insights on the divine del Rey.

“Lana has carefully constructed her persona,” offers Ellen the brunette whose favorite word is constructed. “I think what attracts her to so many women is that she’s constructed a brand that so many of us would like to create for ourselves. It’s mysterious, it’s sexy, and it’s vulnerable.” With that last word, blonde Emily joins the chorus, almost on cue. They giggle like schoolgirls on a bathroom cigarette break. “All art is consciously constructed,” adds Ellen, the Loyola graduate/alternative schoolteacher/poet. “In the ‘Born to Die’ video, she’s singing to tigers in a church, knowing full well that Forever 21 is selling tons of merchandise with crosses on ‘em. There’s the artist person, and there’s the art. I don’t think Lana the person has been affected or polluted by her success like other stars, Chris Brown or R Kelly for example, they’re shameless Capitalists. There’s a difference between exploiting things and being a creative human striving to produce art in this capitalist society that we’re all trapped inside. Lana can project poverty, cinematically, whereas I’m a public schoolteacher who creates art and is actually poor!” Most likely the tickets and tour tee put a large dent in their tiny disposable income budget.

“I’m full of life!” roars Ellen, her excitement visibly rising as showtime is eminent. The vibration in the room is way past electric, more like volcanic. “Emily and I have so many things to be thankful for. All I need is Lana, my cat, my students and PBR!” Okay, I was mistaken. It wasn’t hydroponic weed. “We did this shot and beer combo so we’re kinda toasty,” confesses Emily. “Ellen loves ‘Cinnamon Girl. So do I. God, I hope she sings that! And ‘How to Disappear. And ‘the Next Great American Record’. Oh my God, we both love every song on Norman. ‘Head in my hands while you cover me blue’ who the fuck writes lyrics like that? No one but Lana!”

Lights down. The girl tonsil roar is deafening like Duran Duran Rio tour à la ’82, LA Forum. I was there. Loudest, high-pitch, broken dish, apoplectic concert rattle I ever witnessed. Or the Beatles at Shea Stadium in ’64. Missed that one. I was only eight. With the opening provocative verse of the album’s title track on the giant screen, the star slides into view, past the grand piano into full grand view. “Goddamn, man-child, you fucked me so good I almost said I love you.” The crowd sings every verse, as they will for the majority of the set, delivered with reverent familiarity and boundless enthusiasm. She sidles into the whimsical “Bartender” where I’m thrust back to my la la land roots.

All the ladies of the canyon
Wearing black to the house parties
Crosby, Stills and Nash is playing
Wine is flowing with Bacardi
But sometimes girls just want to have fun
The poetry inside of me is warm like a gun

Thinking about my old pal, Harvey Kubernik, acclaimed author and musicologist whose 2009 coffee table volume, Canyon of Dreams, laid the literary foundation for the multimedia Laurel rage of today. I turned him onto Lana recently. He was envious of my sojourn and offered up a thought. “The rustic ethos, freedom and indelible influence of Laurel Canyon wordsmiths and their audio scriptures obviously informed her current journey. I’m all in on Lana and her trip.”

Three songs in, Best Coasts’ Bethany Cosentino takes the mic as the headliner proclaims, “I’m gonna go sit on a swing.” Her sense of aloofness is effortless, almost dreamy. The audience of femme worshippers are barely flummoxed. This woman can do no wrong in their eyes. Crowd roars as the muse returns with the anthemic, “Born to Die.” Sonic rapture. “Wanna fuck you hard in the pouring rain.” She gave up kissing hard years ago. Moving off the front stage for her connective sequence with the pit worshippers, the fans contract from the rear and push forward as the lights dim to bordello red; struggling to get close enough to perhaps score a personal nod, wink, or even a kiss. Screen shows her traversing the first couple row, collecting bunches of flowers, leaving elevated blood pressure and tears in her wake. “I’m so fucking lucky thank you so fucking much!”

“I will love you ‘til the end time,” from “Blue Jeans,” expands every set of lungs in the joint; a soaring moment of tribal ecstatic unity. “I Fall to Pieces” follows, slow and sultry. The band is sparse, but their sound is full. I’m watching the fans; lovers, hookups, long short and no term at all. It’s date night in Chicago with the aphrodisiac balladeer. “White Mustang,” and “Pretty When You Cry,” slow dance high temperature, Lana never breaks a sweat, swaddled in the tempered urgency that bubbles the blood regardless of tempo.

She is a genuine iconoclast and more importantly, a revolution/sea change in music, attitude and song composition who represents a seismic shift in the same way Nirvana or NWA rearranged the music and culture of their time.  She makes other formidable singer/songwriters seem quaint and outdated. As an artist – to elaborate on what young Ellen opined earlier – the enchantress del Rey conveys a maturity with that vulnerability, an original aura of mystery in a sepia tone cinematic sense, like Lauren Bacall or her partial namesake, Lana Turner.

“We’re gonna do a medley from a bunch of songs from the last few records.” Time out. What was that? Snippets? I’m old school, never dug the circumcised radio edits of classic songs. I grew up on the seven-minute ‘Hey Jude,” pre-teen ear pressed to the speaker until the last na na chant and McCartney howl evaporated into the either like a struck gong. I surmise the medley and abbreviated “Summertime Sadness” and “Doin’ Time” are how she can offer the fans a greater selection of her resplendent tune cache.

She thanks us for coming out and surfs into “Venice Bitch.” Will it be the visionary nine min psychedelic Tommy James jam I viewed about a hundred times when it previewed months ago on You Tube with the mesmerizing Emerson Lake & Palmer ‘70s moog solo and atmospheric outro? Not exactly but we did get some badass guitar feedback to send the faithful out into the frosty Chicago night with a fire in their heart and glow in the soul. Lights up no encore, ninety minutes min to the note. Like Ellen said, consciously constructed.

I’ve been spinning the catalog non-stop for more than a year, even got my hands on several dozen unreleased tracks, early demos, melodic embryos of the girl wonder. Search the web for “Big Bad Wolf” or the Phil Spector-esque “Driving in Cars with Boys; even the tracks that didn’t make the cut are brilliant. Regards this particular performance – my virgin live dance with the damsel – did I long to hear the two most exquisite existential ballads of the decade, “Mariner’s Apartment Complex” and “Hope is a Dangerous Thing?” Of course. Probably best they weren’t in the set. I would have needed paramedics and CPR. But God damn, who am I to argue with her method? She’s beautiful and I’m insane. And we’re all American made.

Tonight, LDR steamed up the storied roaring ’20s mob owned lounge and made five thousand mostly millennials (and one well-traveled back aching, no longer young and beautiful writer) feel … young and beautiful. My 29-year-old daughter is a genuine Brooklyn Baby, writer, environmental activist, lives in Greenpoint. Born and raised in the same place as her father, not far from Laurel Canyon, southern California, where Venice bitches swim and do sweet time in the sunshine, getting high on the beach, pretty baby bye bye. She says Lana creates anthems for women who have to deal with man children their entire lives. One of the things that hit me about her writing, particularly the oft referenced “man/child” is the ability to simultaneously love and hate something, embrace, yet reject in one sweeping emotion or thought.  She’s a feminist, yet an anti-feminist.

Above all, I was enamored by her surreal velvet grasp of the audience and by their unshakeable devotion. If she proclaimed on stage “I’m taking off my bathing suit”, walked out the front door and marched down the concrete avenue to Lake Michigan and asked who’s going swimming with me, every single fan would joyfully drop their clothes on the sidewalk and leap buck naked into the frozen water without batting a pierced eyelid.

Living for Lana. Born to freeze and die. For Lana.