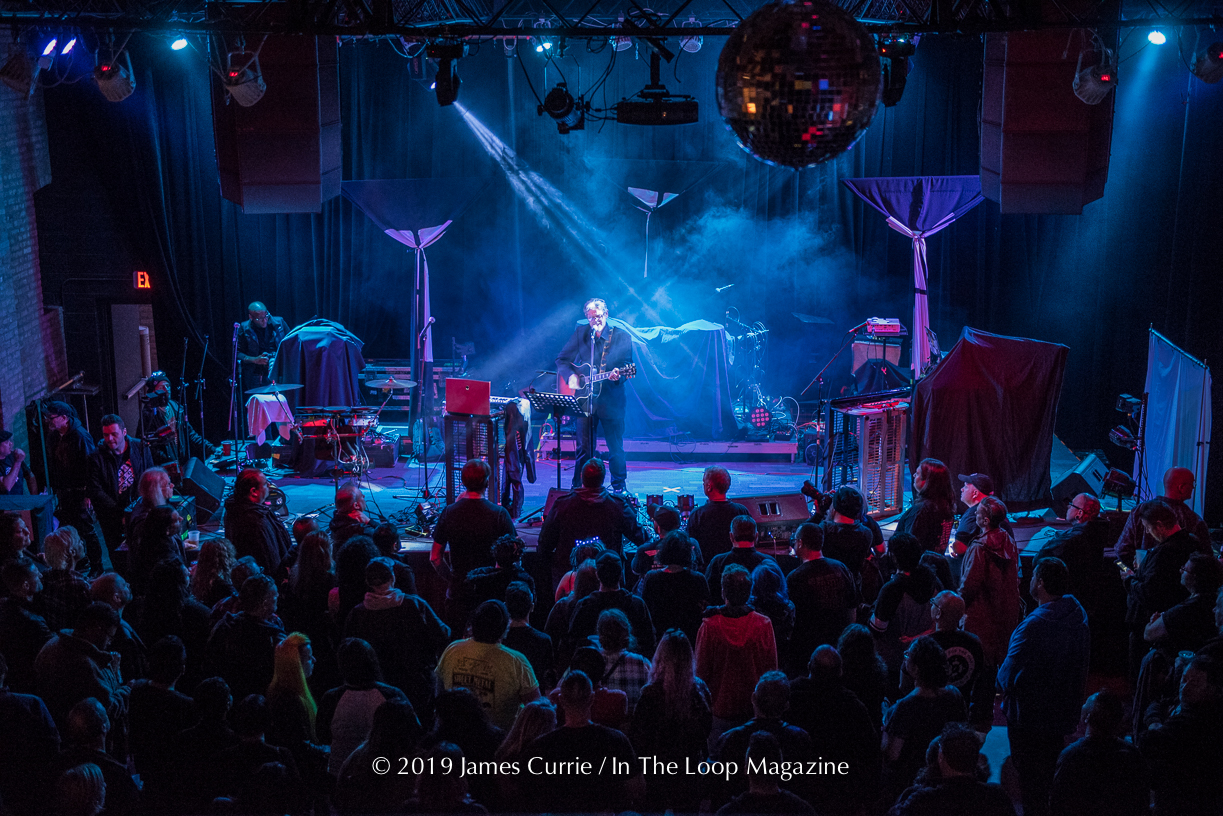 Getting great music in any venue is difficult, or rather I should say, getting the fans to show up for a venue is hard. Especially when it’s in a suburban venue in wintery conditions. But Wire in Berwyn, Illinois (home of Svengoolie, the car spindle and apparently now even more great live music venues) hosted an Industrial music night that showcased classic Chicago industrial music sound with a new band in Conformco, a veteran solo performer that helped launch that retro electronic digital sound, Chris Connelly and a band that started in Chicago decades ago with evil beats and still shaping the way dark, head bobbing, bootie shaking tracks are made, My Life With The Thrill Kill Kult.

The night opened with Chris Connelly performing a solo spot center stage. This is the same Chris Connelly that helped shape bands like Ministry, Pigface, Revolting Cocks to name a few. The songs he performed this night were all tracks from his solo work going back to his beginnings with Whiplash Boychild (1991). Strapped with just an acoustic guitar and microphone, Connelly quickly drew heads from the bar filling the venue nicely for an opening act (kind of ashamed to even say ‘Connelly, opening act’). Obviously egos set aside here as he brought the emotional connection to the night. Though not backed by digital beats or screaming distorted vocals, it was still part of the Wax Trax! Records sound and worked. Even Julia Nash and hubby (Wax Trax! Records royalty) manned the merch booth for the night.

In between the set change, we got a sneak peak at the latest Industrial music documentary. Not that we don’t already have an amazing one out done by the fine folks with Wax Trax! Records (see royalty names above), but this one promises to be something more and include more people involved in that scene and highlight just what it took to create that Chicago sound.

Next was newcomers to the scene, Conformco. An apparent supergroup of Chicago bands that consist of member from Project .44 and Cyanotic. Following in the vein of Revolting Cocks, Conformco created a new, familiar sound. You can tell these guys grew up on this sound as evident in their music. It was danceable, raw, loud and in your face classic old skool Industrial. The sound that would have fit right into the mid 80’s electro-clash fanfare of Ministry, RevCo, Skinny Puppy and the likes. Fronted by two main antagonists, Sean Payne and Chris Harris, the two traded off on lines while the backing members kept the beats going. The stage could hardly contain them as they thrashed back n forth and from side to side. Projections of corporate symbols and the bands name flashed behind and through them as it was projected center stage. We even got a rendition of RevCo’s ‘Attack Ships On Fire’ that really got the house going. These guys are getting around and even toured a few of the dates with TKK already.

Now for the main event. Even though they played just two nights earlier at a gig in Chicago, My Life With The Thrill Kill Kult was back for another round. And since this was a sold out show, proved there is much love for not only the band, but the sound. Still fronted by Groovie Mann and Buzz McCoy, TKK played a sexplosion of tracks from their latest album, ‘In The House Of Strange Affairs’. The songs from that album live worked even better than the digital version heard upon it’s release earlier this year. The songs still flow with the rest of the set. They are reminiscent of the classic TKK sound, but showcase how they still keep moving forward and challenge the listener with something new but familiar keeping it sexy, creepy and cool – cuz it’s hot.

The performance was classic Thrill Kill Kult, a dark and spooky dance show. Newer band members returned for this tour as well. Seems Groovie and Buzz have a new team they like working with as Mami Sato (bass) and Justin Bennett (drums) make their return. Having regulars in the band works. They not only know the songs, but have built a relationship with the band completing the live sound.

Mann dressed in all black leather, looks and sounds great. He still has the moves. He still looks physically fit. His voice still strong and his banter with the audience ripe for the picking. McCoy stoic as ever this time with an opposing white leather jacket (the good to Manns evil perhaps?) and police office style shades. McCoy runs the show from his pulpit of sounds as his keyboards and samplers direct the band into each action. I’m really glad to see these two still making music together. They’re kind of the Jagger and Richards of the Industrial music scene. They’ve been through it all, seen the changes, the lulls, the highs, the drugs. They’ve done film work. They survived through the lean years as well as the highs. Not only are they still alive and kicking, but prospering with new music while still retaining that classic sound and following that got them there. The fans are still there. They still come out in droves. To see Thrill Kill Kult today is a reminder that good Industrial music doesn’t die, it’s just a little hard to find at times.

For photos of My Life With The Thrill Kill Kult, click here