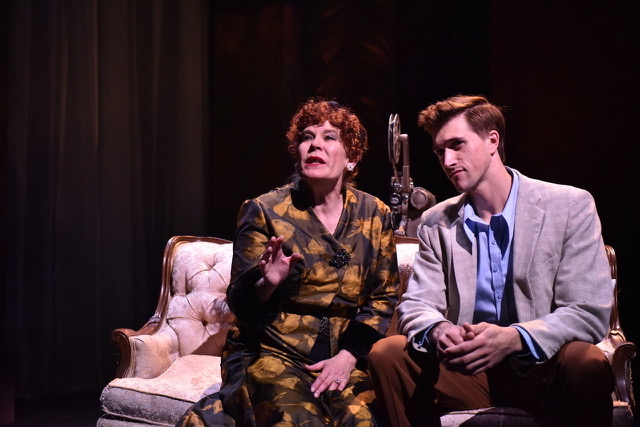 Porchlight Theatre is among the finest interpreters of musical theater in all of Chicagoland, and those traits are in abundance in the company’s staging of the Andrew Lloyd Webber, Don Black, and Christopher Hampton musical “Sunset Boulevard.” The cast – headlined by Hollis Resnik, Billy Rude, Larry Adams, and Michelle Lauto – is superb, with clear voices and wonderful range; the chorus, with Marcellus Burt, Ambria Sylvain, and Ronald Keaton, is similarly strong; and the technical feats of Jeff Kmiec’s sets, Bill Morey’s costumes, and Aaron Benham’s music direction, are first rate.

There is a gnawing problem with this production, however, one that rendered me quite sad as I sat in the Ruth Page Center for the Arts – for all the talent behind the material, this is ultimately an Andrew Lloyd Webber musical, and the man’s busy, melodramatic compositions could not be more inappropriate for the “Sunset Boulevard” source material.

Based on the classic Billy Wilder film, the musical’s plot will be familiar to anyone aware of the Hollywood zeitgeist: down-on-his-luck screenwriter Joe Gillis (Rude) falls in with Norma Desmond (Resnik), a popular actress during Hollywood’s silent film era who has, by 1950, been completely forgotten among the intelligentsia (especially the famous Cecil B. DeMille, played by the talented David Girolmo). Now a recluse, Desmond lives in the past, watching her old films on repeat and descending into madness while her butler, Max von Mayerling (Adams), tries to hold things together. A script – one she has been working on for years and will, in her mind, catapult her back into the spotlight – is her last chance, and she hires Gillis to help her finish it.

Clearly, this is a compelling narrative, and the Wilder film is a masterpiece of cynicism and satire. The lead performances from William Holden and Gloria Swanson are among the most iconic in the history of celluloid, and the Wilder/Charles Brackett/D.M. Marshman Jr. script is one of the greatest ever written, closing with the famously haunting line of “Alright Mr. DeMille, I’m read for my closeup…”

None of those qualities are apparent in Porchlight’s production, but again, that is not due in any part to the efforts of the show’s cast and crew; rather, this is entirely on the creative team behind the material. For starters, the Don Black/Christopher Hampton book makes perplexing changes to the film’s characters and narrative style. When one is working on a stage adaptation of a perfect screenplay, it would make sense to retain the aspects of that perfection, notably Joe Gilles’ famously macabre narration (the film opens with his corpse floating in a pool, and Gilles promising he’ll explain how he ended up there); the wit and observation of that narration, though, are completely absent, and are replaced with a naive, aw-shucks tone that reveals little of 1950s Hollywood. Not only is this bad for the themes, but the characters suffer as well – the smooth sliminess of Gilles is absent, as is the terrifying madness of Desmond and the aching devotion of Mayerling.

But worst of all is Webber’s melodramatic – dare I say, over the top – style, which is a terrible match for the source material’s satiric tone. For “Sunset Boulevard” to succeed on the stage, the music needs vibrancy, whimsy, life – all qualities that are inherently absent from Webber’s work. Instead, we get bombastic, even perfunctory histrionics that suffocate the themes and characters, allowing little space for development. As my wife and I exited the theater, I mentioned that Webber was behind the music, and her response captured the dynamic perfectly: “That makes sense.”

Again, it is all very unfortunate, because Porchlight has assembled a typically fantastic group to stage this very flawed musical. Here is hoping that the next show in their 2019-2020 season, “Sophisticated Ladies,” is more deserving of such talent.

Playing through December 8 at the Ruth Page Center for the Arts, 1016 N Dearborn St, Chicago IL 60610