Ol’ Black Eyes Is Back And Here To Stay, Alice Cooper at Hollywood Casino Amphitheater 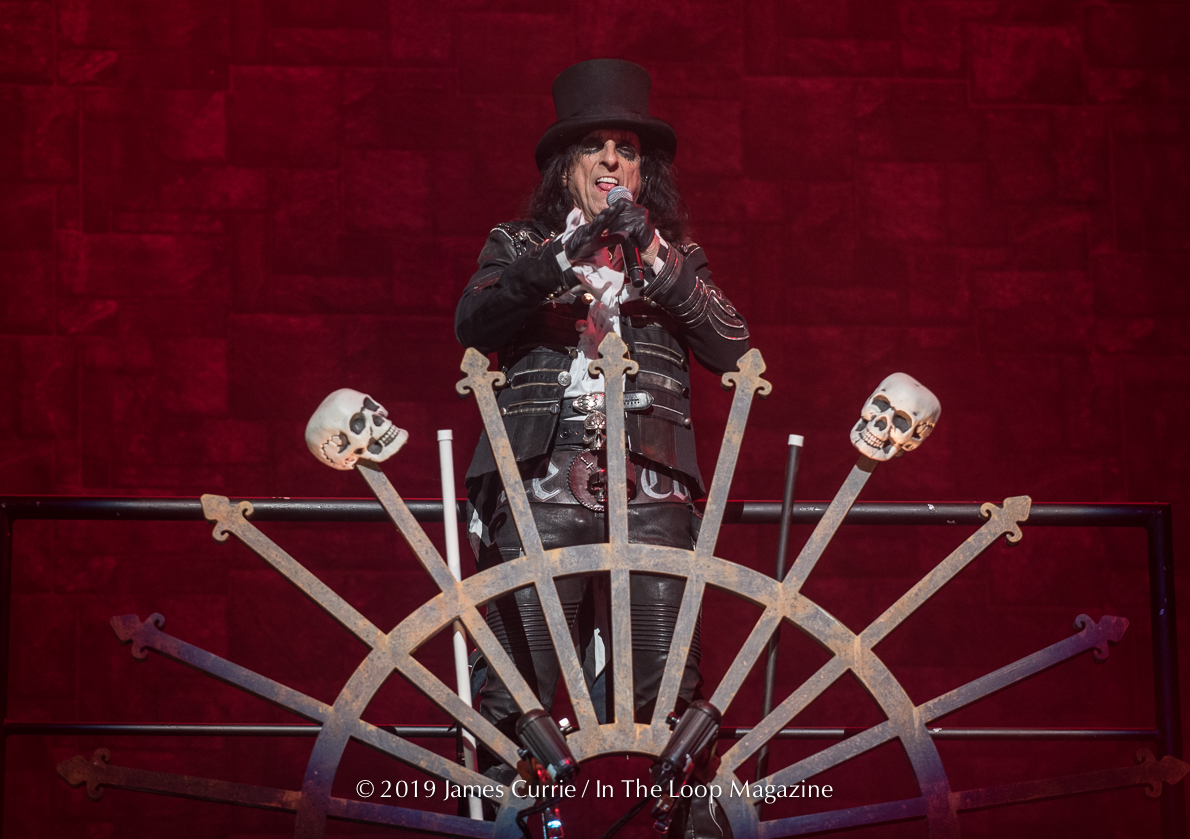 Alice Cooper and his incredible band threw the doomed audience into his “nightmare castle” at Tinley Park for his ‘Ol’ Black Eyes Is Back’ tour. From the cheers and pleasurable screams listening to the announcement over the speakers, I believe the crowd was completely enamored. As the curtain dropped, it revealed the new stage design to compliment the new setlist that brought out all Alice’s spooky playthings.

Before going to a concert, I like to find the setlists online so I know what is going to be played that night. I knew I was going to hear the greats ‘Feed My Frankenstein’, ‘No More Mr. Nice Guy’, ‘I’m Eighteen’, ‘Under My Wheels’, ‘School’s Out’, ‘Poison’ and ‘Billion Dollar Babies’. When I was reading the setlist I saw ‘Bed of Nails’, ‘Raped and Freezin’, ‘Fallen In Love’, ‘Muscle of Love’, ‘Roses on White Lace’, ‘My Stars’, ‘Steven’, ‘Dead Babies’, ‘Escape’ and ‘Teenage Frankenstein’ all songs I have not heard live before. Seeing the list, I immediately wondered how Alice was going to transition between the songs.

I used to be such a sweet, sweet thing, but over the years I have gone to see numerous Alice Cooper concerts and I can attest that this 71-year old goth-grandpa and his “hired guns” still bring it each and every show. He treats his band as a part of his family and not just some fly-by-night musicians. But do not be fooled, you would not want to catch Alice in a dark alley, because he’ll sureley bite your face off!

Glen Sobel (drums), Nita Strauss (guitar), Tommy Henriksen (guitar), Chuck Garric (bass) and Ryan Roxie (guitar) were all incredible and sounded perfect together. I think one of the reasons why they have a great time playing on stage is that none of them have egos and appreciate the opportunity delivering music to the masses across the globe.

One of my favorite songs to see performed is ‘Ballad of Dwight Fry’. I had a little frown on my face when I did not see the song on the list, but quickly thought of all the other songs I would hear live and instinctively knew that Alice and everyone associated with the show never disappoint. So instead of first seeing Sheryl as a nurse, we were introduced to her as a zombie bride during ‘Roses on White Lace’. Of course, Sheryl was back on stage as a nurse, but this time during ‘Dead Babies’ where she pushed a baby carriage onto the stage.

As Alice laid the baby prop onto the stage and sung to it, “Goodbye little baby…so long little baby” holding up a meat cleaver, I thought ‘here comes another transition’. Before Alice could bring down the cleaver two full-size big head babies quickly grabbed him. A little struggle ensued and he was eventually brought over to the guillotine, while a gigantic inflatable baby danced on the stage. I thought it was a flawless way to bring in the execution machine.

Of course the show would not be complete without ‘Under My Wheels’ and ‘School’s Out/Another Brick In The Wall’ as their encore songs. Similar to the encore, much of the night the crowd was singing along with Alice and the band. We definitely could not get enough and I feel they could have played for another two hours. Yeah I know that is asking a lot, but there is no show out there like it. There are plenty of dates on the tour throughout the United States, so get to one or more than one before the tour is over. You will not be disappointed.