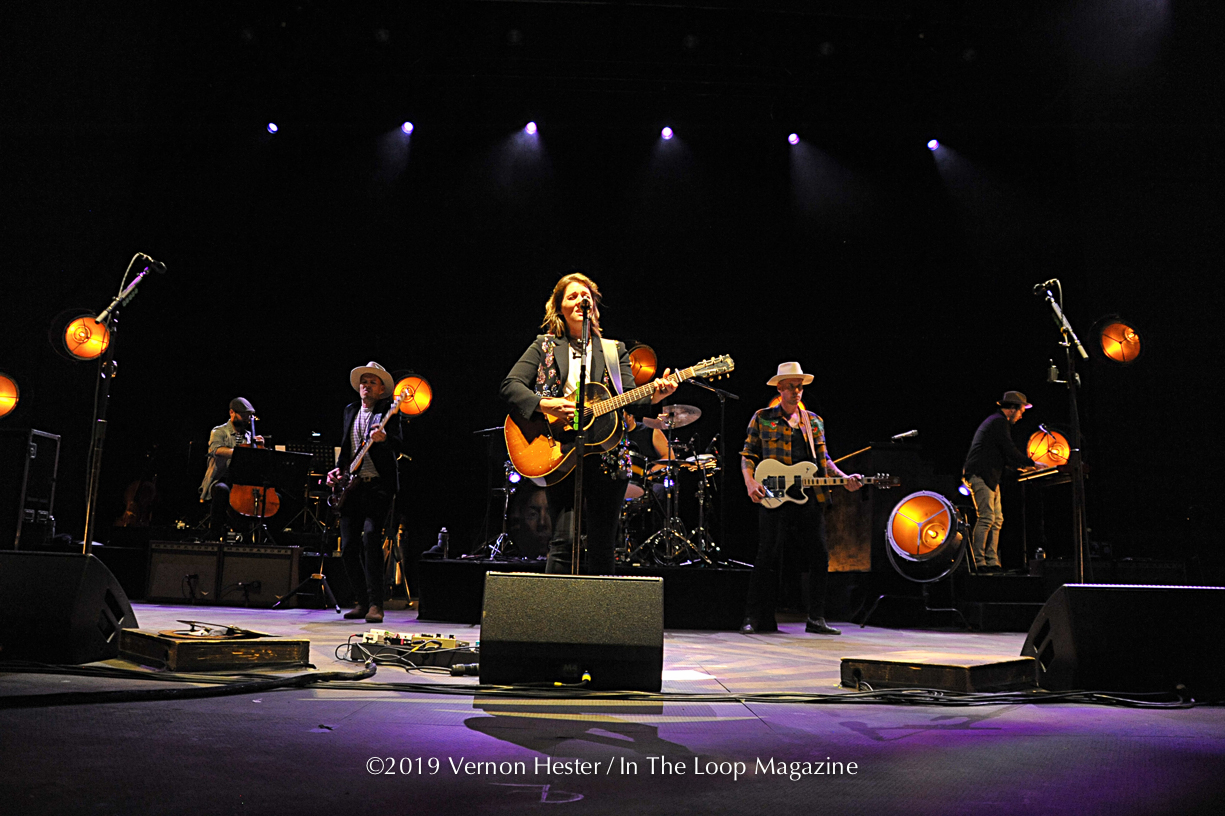 Regardless of the flashbang hype of television musical competition shows like American Idol and America’s Got Talent and the fact that they have now become commonplace, there is still a lot to be said for the term “the old fashioned way.” A major case in point is the ever expanding emergence of vocalist/guitarist/songwriter Brandi Carlile who in fourteen short years watched her critically acclaimed music turn her into a full fledged rock star. After snatching three Grammys for her sixth album, By the Way, I Forgive You (on Columbia Records) she’s managed to play in front of larger audiences, watch her previous albums fly off record store shelves by the tens of thousands, get invites to Joni Mitchell’s house, and pop up in winking cameos (Carlile, who is gay turned up singing Roy Orbison’s “Pretty Woman” in Bradley Cooper’s version of A Star Is Born). All of which comes as something of a surprise to me.

The one time I had seen her was on opening day of the 2018 A Taste of Chicago. Roots rocker Martha Redbone and her Roots Project set the tone, but I was a bit disappointed that Carlile and her crew (including bald, tall, and incredibly talented identical twins Tim and Phil Hanseroth) appeared laid back, soft rocking, and over melodious. Laid back, soft rocking, and over melodious are not qualities that tend to hold my attention, and so, good as the show was I did not stay for the finish.  I assumed that I would forget her but so many of my friends got into the habit of swooning over the very mention of her name and By the Way, I Forgive You. Then the Grammy nominations came out and she nabbed more nominations than any other female artist which certainly caught my attention. Obviously I had missed something in my desire for instant gratification and cheap thrills.

All of that led me to her packed show at Northerly Island on June 29 to watch her debunk what I thought was her image as a flower nibbling enchantress.

After a positively lovely and boring set by the opener, Lucius, and a pre-show piped in intro concert from a selection of female and queer icons (Aretha Franklin, Cher, Joan Jett, Tina Turner, Cyndi Lauper) Carlile hit the stage running with a punchy “Hold Out Your Hand” followed by equally driven versions of “Wherever is Your Heart” and “Hard Way Home.” It took a moment for me to get used to the triple vocal assault between Tim and Phil Henseroth and Carlile and the three of them are justifiably celebrated for those harmonies. In this case it sounded pleasantly off putting because the three of them, on “Wherever is Your Heart” and “Hard Way Home” let those pipes fly without restraint. Hearing the three of them go at it was like getting hit with a phalanx of silk scarves. Before ripping into “Raise Hell” Carlile joked that the nearly capacity filled venue is, “the biggest turn out we’ve ever had in Chicago and to celebrate I wore my fanciest piece of clothing.”(She was referring to her jacket which was adorned with glitter and sparkles.) She also said, “We love playing your city even back when we here playing in Schubas…,” which got a cheer from the audience. “My Song” switched the energy down a notch but midway through the song Carlile led her band through a gentle take on U2’s “Where the Streets Have No Name” which gave the show a deeper dimension.

Then Carlile broke the house up when she said, “Ever since the Grammys my life has gotten downright weird!!!” She then related getting an invite to Joni Mitchell’s house who told her, (due to a degenerative illness) “I don’t play music anymore, and I have a house full of instruments just lying around.” After arriving Carlile and Mitchell were  joined by Hozier, Herbie Hancock, and a tipsy Chaka Kahn for a spontaneous “Summertime” and a lot of wine. Then after the audience’s laughter wound down, Carlile picked up a guitar and offered a lustrous reading of Mitchell’s “A Case of You.”

Jess Wolfe and Holly Laessig, the vocalists of Lucius came back onstage to join Carlile for a soaring version of their “Dusty Trails” but she topped that by performing a crisp reading of Elton John’s “Madman Across the Water” which I daresay was better than the original.

After talking about getting her head around becoming a new mother, Carlile performed a hushed careful “The Mother” which hypnotized much of the audience. Hard rocking versions of “The Joke” and “Pride and Joy” closed out the show proper but Carlile was hardly done for the night. Queen’s “We Will Rock You” gave Tim Henseroth the chance to stop being so polite and bust out with a blistering guitar solo. It also gave Carlile an opportunity to rough up her voice and have a gay old time doing it (Somehow Carlile managed a balance that pleased all of her audience. She talked openly about her marriage to a woman while acknowledging the first African American lesbian mayor of Chicago and that the Chicago Gay Pride Parade was taking place the very next day which pleased many young men waving rainbow flags in the crowd. But she also managed not to offend many of the conservatives and middle agers who were in for the show from the suburbs.). She capped the evening with Barak Obama’s favorite Brandi Carlile song, “Everytime I Hear that Song” and closed out the night with two heartbreakers; “Party of One” and “Somewhere Ever the Rainbow.”