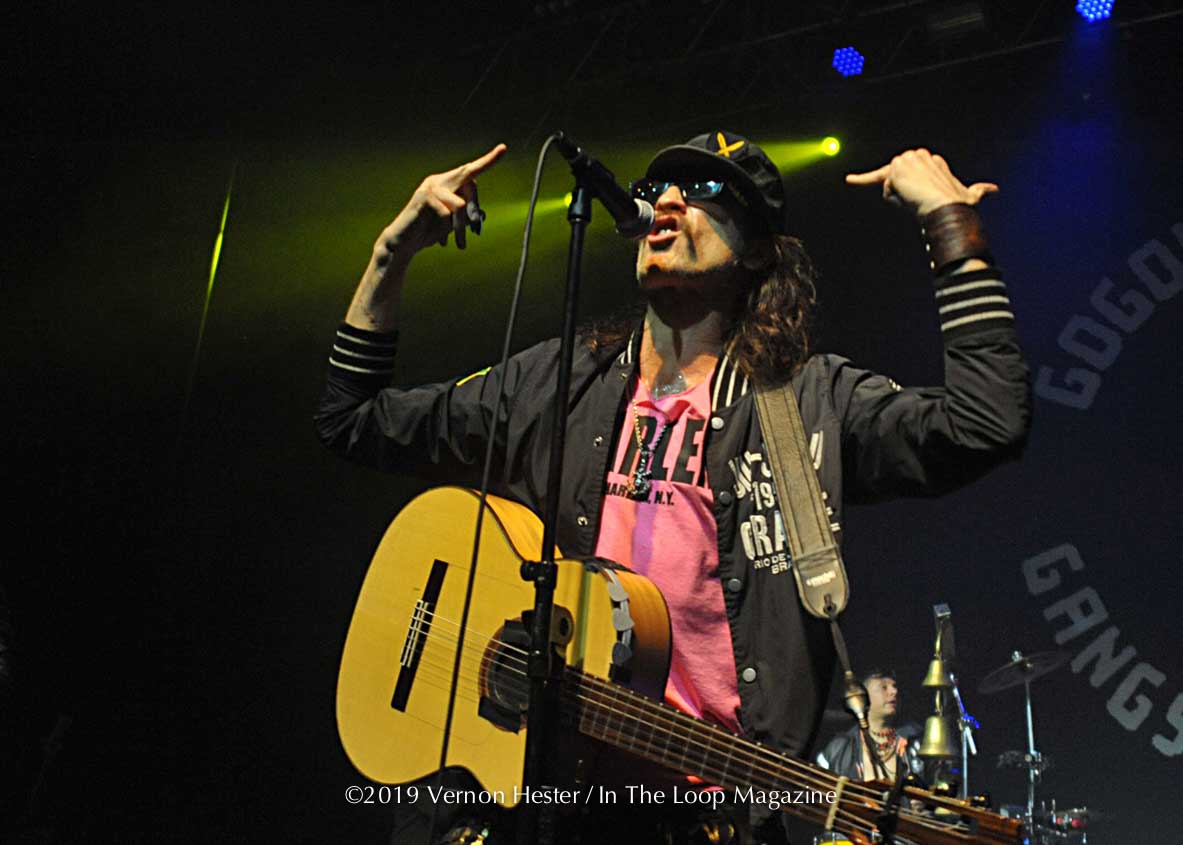 I gave up wondering whether Eugene Hutz and his band Gorgol Bordello were real, live, naturally born Ukrainian gypsies  long ago. I even gave up wondering if his “gypsy punk” was really a load of schtick with the label masking high grade punk gussied up with violins and accordions. After seeing the band tear through a twentieth anniversary shindig at The Riviera Theater on June 1, the only thing I can say about him and them with certainty is that they are clearly out of their mother fuckin’ minds.

Granted it may be hard to believe that Hutz and Gorgol Bordello have been inciting mass butt shaking and fist pumping salutes for the last twenty years, but it all depends on where you look. In that time they’ve dropped seven full length albums and one EP and have gone through seventeen members like butter. The truth is these guys make their nut on festivals and tours rather than music sales, and their reputation as must-see live entertainers more than proceeds them. In 2019 its pretty obvious that that Ukrainian label is really a hearty helping of hooey; the current line up of the band includes one Puerto Rican (vocalist Ashley Tobias), two Russians (violinist Sergey Ryabtsev and guitarist Boris Pelekh), one Ethiopian (bassist Tommy Gobena), one Ecuadorian (percussionist and vocalist Pedro Erazo), and two  Americans (drummer Alfredo Ortiz and vocalist/guitarist/cheerleader Hutz). So much for authenticity but really, Gogol Bordello was never really about being genuine or neat.

The show kicked off with an unexpectedly tame “Through the Roof n’ Underground” with Hutz raising a bottle of wine in salute to his faithful audience. That was the end of any suggestion of sentimentality as he and the band ripped through exceptionally sloppy (and all the better for it), careening versions of “Not A Crime,” “Immigrant Punk,” and “I Would Never Want to be Young Again.”

What got my attention this time (I’ve seen them twice before at big ticket festivals where they were scrunched into a schedule of hordes of other bands) was the high jinx taking place onstage. You could be distracted by Hutz (we’ll get to him in a moment), but with Tobias wailing like a mad siren having a melt down, Erazo exhorting the crowd with what looked like bug-eyed fright (clearly an act), Pelekh elegantly pogoing like a piston at medium speed, and Ryabtsev fiddling his ass off, the band gave their leader a run for his money.

Hutz himself is something of a contradiction. He is at once a serious rocker,  passionate activist, and  Vegas style clown at precisely the same moment and he wiggles and flings his elongated fingers like he’s putting a voodoo curse on his audience. (His middle fingers resemble of Freddy Kruger’s… when he flipped the bird to the oppressors in his songs I could see those digits clear up in the balcony). Still, for all of his fury and punch there’s an element of comedy which is hard to ignore. Sporting a head of stringy wet locks on his head and an unkempt handle bar moustache which looks like a chinchilla died over his upper lip, he has mastered the art of playing to the back of the house. Mick Jagger may have turned that style into an art form, but Hutz has managed to top him by making it frantic AND engaging. Watching him pound on his guitar and spin on one leg like he did on “Not a Crime” was the funniest bit I’ve seen at a concert in ages (the fans went ape shit).

For all of the “rebellion” presented on stage as entertainment (a t-shirt sold at the show had a portrait of Hutz and the quotation, “This moustache kills fascists!!!”) there was still a lot of respect played to punk elders. A cursory reading of Elvis Presley’s “Heartbreak Hotel” preceeded “When the Trickster Starts a-Poking (Bordello Kind of Guy)” while The Cramps’ “I Can’t Find My Mind” and a deliberately sloppy romp through Iggy Pop’s “Real Wild Child” kept the show grounded.

For the finish, Gorgol Bordello served up a huge sloppy finale high on goofiness. After Tobias came out during “I Just Realized” whacking a big bass drum, Hutz, for the encores closer, “The Sun is On My Side” jumped on said drum and was surfed into the crowd for one last flip of the bird. Clearly this is a band for our times.