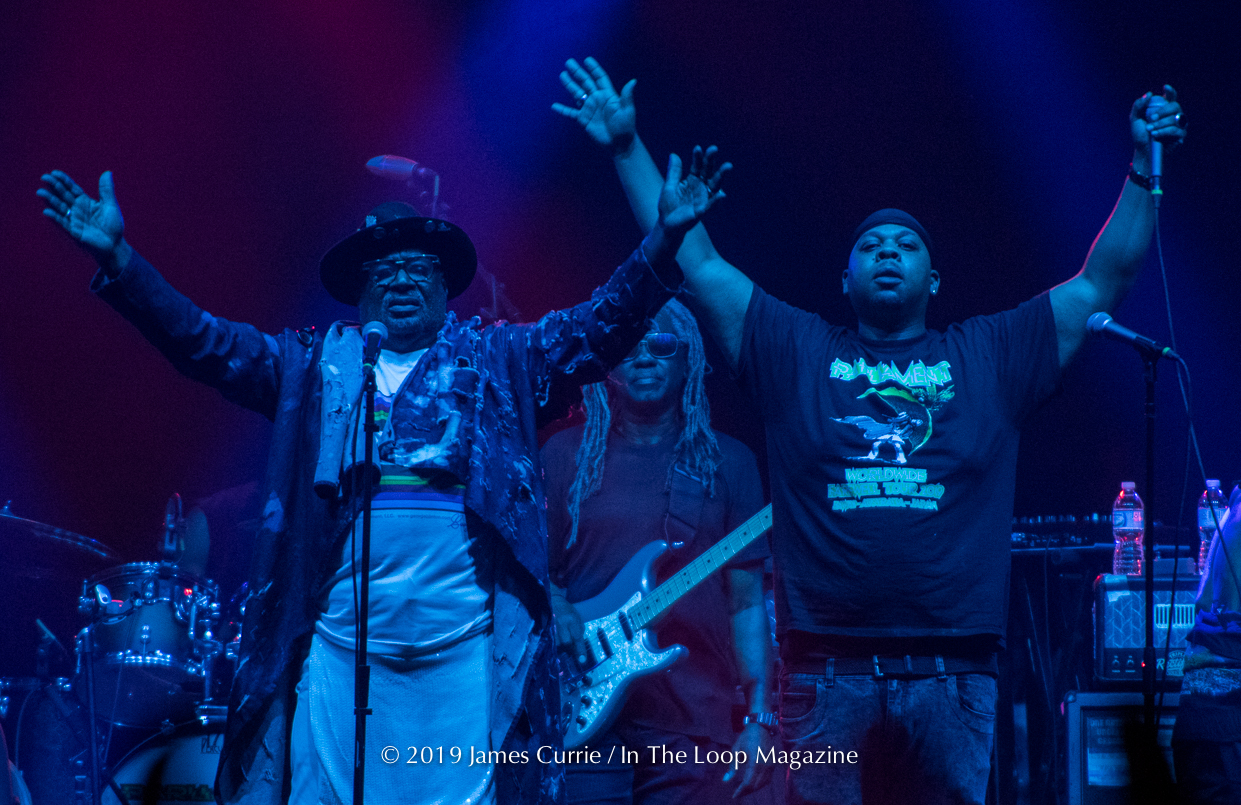 It could have all been so simple: George Clinton – the outrageous, genius mastermind behind the legendary funk groups Parliament and Funkadelic – announces a farewell tour, one rich in nostalgia and deep with the funk; he tours major U.S. cities, playing a sweet, bright recreation of such legendary albums as “Mothership Connection,” “Uncle Jam Wants You,” and “One Nation Under a Groove.” And his audiences – mostly Baby Boomers recalling Clinton’s glory days – pack the venues and yearn for simpler, funkier times.

Oh my – what a grand joke such a vision is!

While it is true that Clinton’s May 31 concert at the Aragon was part of his farewell tour, nothing of my aforementioned hypothetical was realized. Hell no: what Clinton and his dynamic band (15 people total, by my highly unscientific count) offered was no nostalgia trip. Sure, we were indulged with such classics as “Maggot Brain,” “Flashlight,” and “Give Up the Funk,” and sure, the communal, P-Funk vibe was present in spades. But anyone among the multiracial, multigenerational crowd expecting any of Clinton’s ‘70s antics – this is, after all, a guy who created such loony alter egos as “Dr. Funkenstein,” and who sang such lyrics as “And me? I’m known at the Lollipop Man, alias, The Long-Haired Sucker” – was instead treated to an astonishing modernization of Clinton’s P-Funk sound, one that brought elements of hip hop and even thrash metal into his funky universe.

The sound at the Aragon was, simply, fire: a three-guitar attack blasting riffs and solos across the performing space; keyboards, trumpet, and saxophone adding deep, complementary colors; an airtight rhythm section that approached its instruments like weapons of destruction; and several dancers and singers of spectacular athleticism and dexterity, who alternated between rapping, choreography, and Clinton’s patented spoken-word flourishes. Although there were quieter moments amidst Clinton’s 100-minute set, the majority of the numbers burned with a fire and intensity that sometimes reached a frenzied fever pitch.

And of course, there was Clinton himself, who at 77 lacks none of the charisma and stage presence that made him a legend by his mid-30s. Entering the stage wearing a king’s cloak and crown (both of which he quickly shed in the sweltering venue), Clinton attacked the material as an elder statesman, alternating between singing, audience hyping, and calling/responding. And whenever Clinton tired – remember, the funk master is 77 – there was a chair stationed for him on stage, upon which he would sit and direct his musicians.

Clinton and his band did not take the stage until 10:45 (Miss Velvet and the Blue Wolf, Fishbone, and Galactica all opened), but it hardly mattered to the crowd – what P-Funk offered was so incendiary, so vital, so extraordinary, that it could have resurrected the dead, and it served as a sublime sendoff to one of American music’s most vibrant, imaginative, wholly original figures.