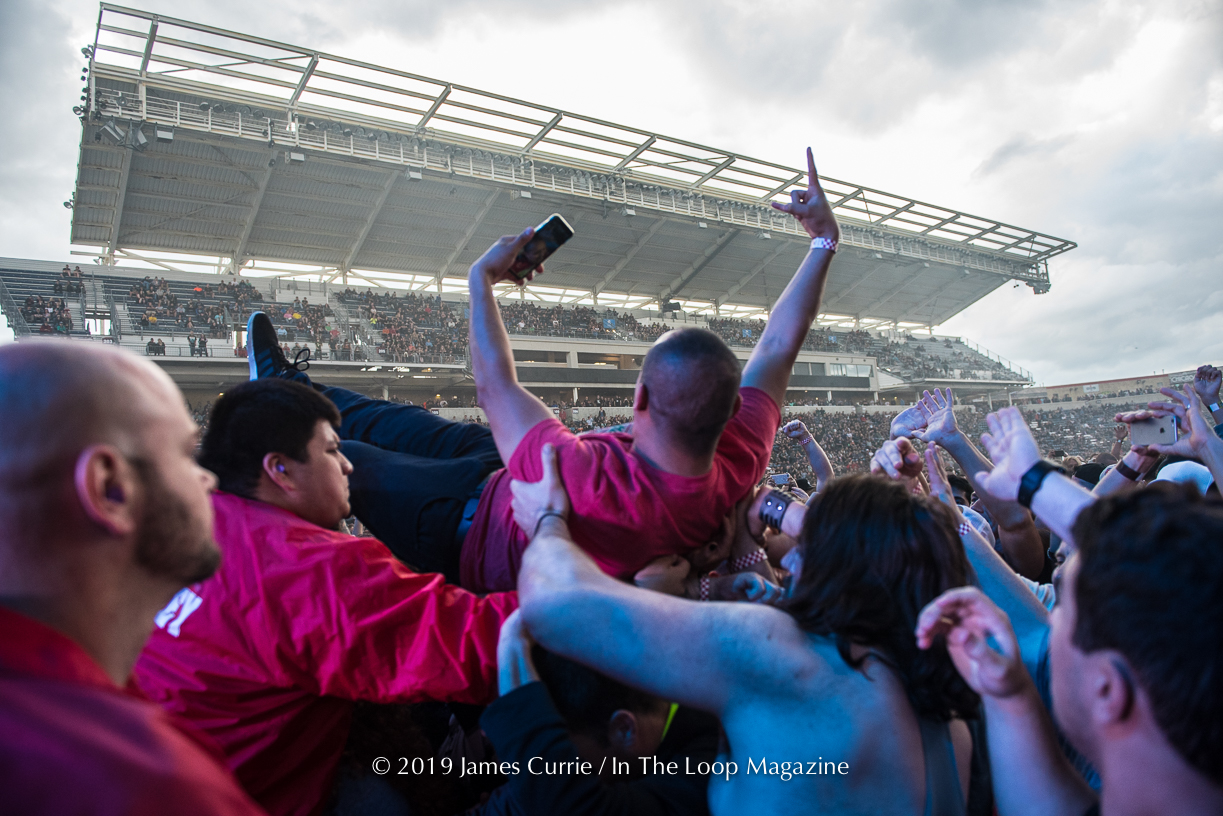 Chicago Open Air Festival (rebranded “Chicago Open Air Presents” for 2019) returned this past weekend to kick off festival season, and while the weather didn’t exactly cooperate, metal and hard rock fans were treated to some of the genre’s heaviest hitters, along with some up-and-comers who deserve your immediate attention.

After facing a near rain-out, Saturday’s lineup saw cuts to the early acts as thunderstorms and rain were the order of the day. (Code Orange, Knocked Loose, and Vein were generously given a bill at Metro on Saturday night to make up for their lost sets, which was, by all accounts, a sold-out barnburner on its own.) It was left to Beartooth, Meshuggah, Ghost, and System of a Down to carry the day, and the latter two certainly offered some of the biggest draws and most anticipated sets of the weekend.

Sunday fared a bit better in the weather department as Alien Weaponry and The Black Dahlia Murder got things going in the afternoon. The surprise hit of the day came in the form of Fever 333, a raucous three-piece rap-core outfit whose thirty minutes on stage (and all over the venue) rivaled the best sets this reviewer ever saw from the likes of Rage Against the Machine.

“Some of you might be out there wondering what the fuck is happening on this stage,” started vocalist Jason Aalon Butler, before savagely tearing into a diatribe on the scourge of race politics, misogyny, and in the end, unity, as he climbed to the top of the stadium rafters and adjacent rooftops (not an exaggeration). The band’s take-no-prisoners attitude is solely needed right now in the face of perhaps the most corrupt time in American political history, and you’ll want to see the trio before they’re headlining arenas.

In This Moment’s elaborate stage set and costume changes worked surprisingly well in the middle of the day, with vocalist/front woman Maria Brink kept the spotlight on politics (more specifically, gender politics and violence against women) with a heavy dose of twisted Catholic theatrics. “Whore” and “River of Fire” got fists pumping throughout the venue, though the band’s short set barely had a chance to get the crowd acclimated the set pieces dosed in heavy fog, before having to surrender to such an early slot.

From the second the French quartet hit the stage at dusk to a wall of flames, Gojira’s sound roared through the stadium like their namesake, and their forty-minute set showcased a band that has continued to grow in both size and ability. Opening with “Oroborus” from 2008’s The Way of All Flesh, the brothers Joe and Mario Duplantier (guitar/vocals and drums, respectively) along with guitarist Christian Andrea and bassist Jean-Michel Labadie have honed a sound that falls somewhere between the technical prog-metal of Meshuggah and the more thrash-centric elements of Chaos A.D.-era Sepultura. The result is absolutely punishing—Gojira get better with each pass, and their slot opening for Slipknot later this summer should be seen by all.

The only real ‘legacy’ band of the weekend, The Cult was a refreshing injection of straightforward hard rock, though the extent to which the crowd really connected with the band remained questionable – maybe it was the day winding down or just the burgeoning excitement for Tool, but the rock stalwarts didn’t draw the kind of fan response they clearly hoped for as vocalist Ian Astbury did his best to rile the masses. That was a shame, as The Cult have been consistently great since their rise to radio fame in the late 80s-early 90s with hits like “She Sells Sanctuary,” “Fire Woman,” and “Love Removal Machine,” all of which sounded just as good on Sunday as they always have. Astbury has one of the best voices in rock and always has, and The Cult provided a much-needed blast of four-chord rock and swagger to the fest as a whole even if a fan next to me baulked, “Is that singer shaking a tambourine? Was is this Woodstock?”.

But of course, the major draw on Sunday was…do I even need to say the name? For many, 2019 will be the year of Tool as the band preps for a new album release, and the two new tunes played in Sunday’s ten-song set (“Descending” and “Invincible”) bode well for that record. Taking the stage to a backdrop of swirling images and a brightly lit six-pointed star, vocalist Maynard Keenan appeared dressed as a mohawked jester, and from the band’s opener “Aenema” to the ten thousand “Stinkfist”s in the air at the end, Tool’s return to the live stage was long overdue for the faithful and a fitting end to the weekend.

To conclude, there were many highs and a few lows to the newly christened, 2019 edition of Chicago Open Air Presents. The original July offering was probably a bit more stable in terms of weather, as lightning and high winds evacuations have apparently become the norm in the U.S. festival market. That’s fine and well and certainly in the interest of safety, but organizers on the whole should look to more legitimate contingency plans in the future if scheduling during a rainy season—it’s tough to explain to someone driving hundreds of miles (and some flying in) that they won’t be seeing their favorite band because of a thunderstorm, after potentially paying hundreds of dollars to do so. And the bands assembled for the two-day model of COA were stellar across the board, an airtight roster of talent from top to bottom that no one could question.

However, as Day 2 drew to a close and the sun went down over Seat Geek Stadium, it was hard both as a metal fan and a journalist to look at the thrown-together (and incomplete) VIP area and wonder what happened to such a promising festival. The three-day behemoth that was Open Air set a bar so high in 2016 and 2017 that it seemed the U.S. might finally have the foundation of a festival to rival the European greats like Wacken and Download. Perhaps it was not to be. From exorbitant ticket prices in the initial on-sale (especially considering that tickets were literally being given away on Saturday) to the visible extent to which this year’s iteration cut costs in execution and lack of of official Open Air Presents staff on site (no second stage, fewer food and entertainment vendors), it would be a surprise to see Chicago Open Air return—but we’ll cross our fingers. Let’s hope things clear up and they don’t double book against their own festival.