Concert Review: Who Is Cold? The Who Live At Hollywood Casino Amphitheatre 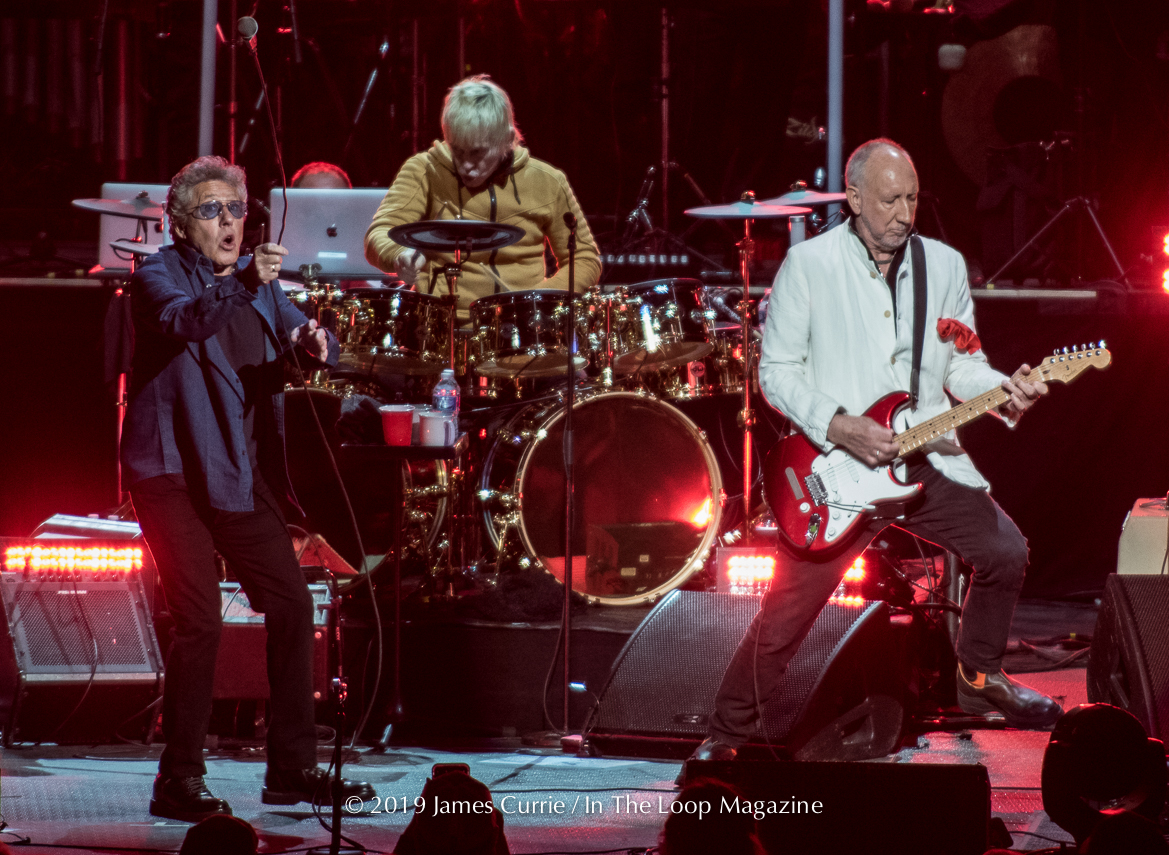 The last time that I saw The Who at the Hollywood Casino Ampitheatre in Tinley Park was 2002. The outdoor, partially pavilion covered venue was called the “Tweeter Center” back then and the band was doing its best to move past the unexpected passing away of original bass player John Entwistle a month earlier. It wasn’t certain if one of the world’s most popular rock bands would continue to work and play as a band or if they would hang up their later-to-be-smashed guitars and swinging microphones and die along with Entwistle. Flash forward 17 years and the behemoth rock band is still at it and though they may not be quite as spry as when they commanded the stage at the original Woodstock concert in 1969, they showed that they could still spark life in the near sold out arena as they braved unseasonably cold and damp conditions (a humorous running theme in the band’s chatter with the audience) on a night filled with just over two hours of their most radio- friendly hits.

One hint that I was about to see a band that was at its peak popularity in the 1960’s and 70’s is when I heard gray haired concert goers discussing astrological signs amidst the fragrant aroma of marijuana, harking back to the “flower power” hippie era. The mostly 50-something crowd was interspersed with some younger fans that may have been introduced to The Who by the theme songs of TV’s CSI crime drama shows. The crowd stood throughout the show, swaying to the music in what may have been an effort to stay warm despite the frigid, windy 46 degree temperatures. I could see trees that were green with leaves off to the sides of the pavilion, though you could imagine them being barren and snow covered on this night. Lead singer Roger Daltrey shouted “Speaking of that cold wind… man… it’s a bitch! How do you live in this place?” To which wind-milling guitar legend Pete Townshend responded, “Roger has somehow made this your fault!” and reminded everyone that their homes in the United Kingdom are actually very similar.

The two veteran classic rockers and Rock and Roll Hall of Fame inductees joked and laughed their way through over two hours of hit songs, performing large portions of their rock opera, “Tommy” as well as “Quadrophenia” while backed by an orchestra to help flush out the songs. I tried to count all of the orchestra members and noted that there were over 30 musicians on stage with the touring band. It’s worth noting that the orchestral arrangements for the tour have been created by David Campbell who is probably better known as the father of alt rocker Beck.

The two most easily recognizable members of The Who’s touring band were drummer Zak Starkey, who claims even more famous rock lineage as the son of Ringo Starr, whom you may have heard of. Zak does an impressive job of subbing for the late drumming legend, Keith Moon, bringing an avalanche of percussion to the tunes. Simon Townshend, Pete’s brother, is also a member of the touring band and Pete noted during the show that Simon will be featured on the album that The Who have coming out later this year and according to Pete “will stand to make two or three HUNDRED dollars”… cue audience laughter.

I think I can safely say that The Who still have what it takes to put over a phenomenal rock show, even with Roger clocking in at 75 years old and Pete registered at 74. When they first hit the stage, Pete jumped up and down in his white suit coat (with red ascot coming about a foot more out of his coat pocket than is normally intended – Roger mostly wore a winter coat which he tried to go without for a while and said “I give up” and put it back on) and showed that he has not been tremendously slowed by the passage of time. The leaps and posturing around the stage may be slightly less ferocious than they were 50 years ago, but the moves and, most importantly, the ability to crank out raucous hooks and fast strumming were well intact. Roger’s voice was above par on this evening. Pete complemented how strong his vocals were at the end of the night and it’s true that he can still belt out the big rock and roll screams heard on songs like “Love Reign O’er Me”.

Roger Daltrey has always been known for wild swinging of his microphone with it’s long attached cable, sending it up into the rafters one moment to catch it when it becomes earth bound again like a rodeo cowboy working a lasso. Band members do need to pay attention to what he’s doing because when the mic is swinging in horizontal circles it can become an inadvertent hazard. At one point he propelled the mic into a table full of beverages, sending them flying, which was probably not a planned part of the show. That was met with stunned laughter by the band members that noticed.

The night included tender moments when Roger and Pete had the stage to themselves. They played an acoustic version of “Won’t Get Fooled Again” that almost made you forget the much harder version of the same song that has been a staple of classic rock for generations. They also shared the stage alone for “Tea & Theatre”, the most current release played on this night (from the 2006, “Endless Wire” album).

It was a night to remember how great The Who were and enjoy how strong their “live” performances still are. Anyone who braved the damp and cold was rewarded with a wonderful night of music and fun.

For more on The Who, including current tour, new album updates and legendary news, click here

For photos from The Who live at Hollywood Casino Amphitheatre, click here

Setlist for the evening

We’re Not Gonna Take It

See Me, Feel Me

The Kids Are Alright

The Punk and the Godfather