ITLM OTRS: Hatebreed Live At The Rave in Milwaukee. 25 Years of Going Strong With No Slowing Down 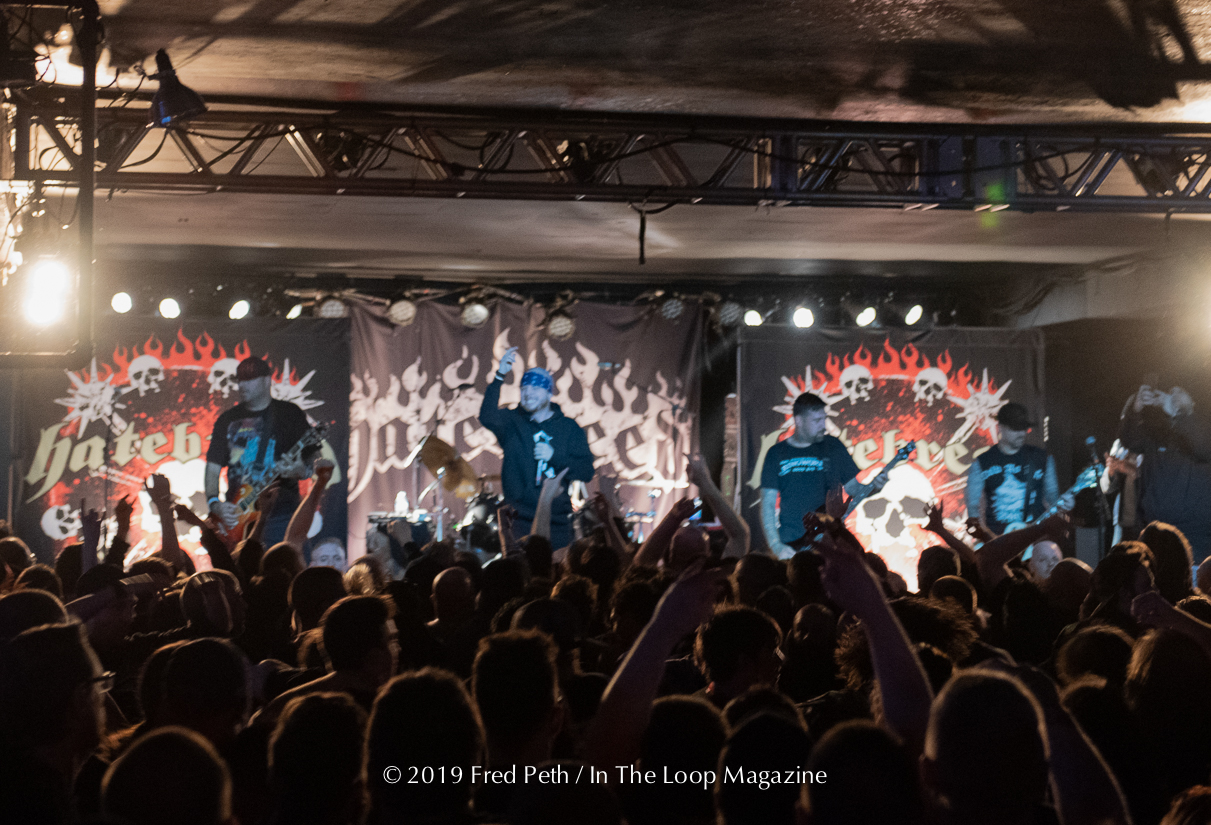 After seeing the first leg of their 25th Anniversary Tour in Chicago, I decided to make the drive up to The Rave in Milwaukee to see their 2nd leg, since I knew the show would be worth it. The highly successful and positively reaffirming band always gives a straight to your face show.

Hatebreed formed in 1994 in Bridgeport, Connecticut and consists of Jamey Jasta (vocals), Wayne Lozinak (lead guitar), Frank Novinec (rhythm guitarist), Matt Byrne (drums) and Chris Beattie (bass). The band has eight full-length albums in their collection and hopefully they will be back in the studio to record some new music after they destroy everything in their path after completing this second leg.

As the lights dimmed, the stage lights came on and the crowd raised their voices as the band walked from behind the backdrops onto the stage. Jasta came out to the middle of the stage slapping people’s hands in the front row getting them more hyped up. He called out the crowd wanting to see them moving from side-to-side and front-to-back. No one was going to be able to stand still during this show. Hatebreed kicked it right over from the word “Go” with their opener Empty Promises.

My favorite song Proven from their album Perseverance was my introduction to them back in 2002. I always go back to this song when I need to be picked up from any tough times that I am going through. From that, I hit many of the other songs that Hatebreed plays live and I can kick my worries in the face, like how Hatebreed shows their unrelentless passion in their concerts.

Hatebreed has been know for quickly starting one song after another with hardly anytime to take a break, which did not seem like a problem for this diehard Milwaukee crowd. When Jamey asked the crowd to raise their fists in the air, the crowd happily and quickly responded to outstretching not only one fist, but on occasion two fists.

During, In Ashes They Shall Reap, for fun Jasta gets the crowd split into two. Wayne’s side to sing the 1st part of the song and Chris and Frank’s side to sing the 2nd part. It is great to see the crowd battle it out as Jasta runs from both sides of the stage as he points to the side of the crowd, he wants to hear them sing.

Jasta wanted to see people to come out of mosh pit retirement and to “get back into the game”. Even though the basement of The Rave seemed be a smaller place to see the show, the crowd.

Matt’s heavy drum beat at the beginning of Everyone Bleeds Now kicks you in chest! There was not anyone standing still as people were crowd surfing from the intense mosh pit to where Jasta was constantly smiling and pumping his fist on the stage.

What energy the crowd had left in them they used it during Destroy Everything. The whole crowd was pumping their fists, pushing each other and singing along with Jasta and the rest of the band as Chris was intensely head-banging, while pounding on his bass. Closing out the night with I Will Be Heard, the crowd gave it their all after an enjoyable and long night of great music.

Be sure to get to the Aragon Ballroom in Chicago in September. They are going to be playing there with Dropkick Murphys and Clutch. I am looking forward to seeing more crowd surfing and an even more intense mosh pit, since this will be the largest indoor venue I have seen Hatebreed at.

For photos of Hatebreed live at the Rave in Milwaukee, click here

@ – from Satisfaction Is the Death of Desire

^ – from The Concrete Confessional

* – from The Rise of Brutality