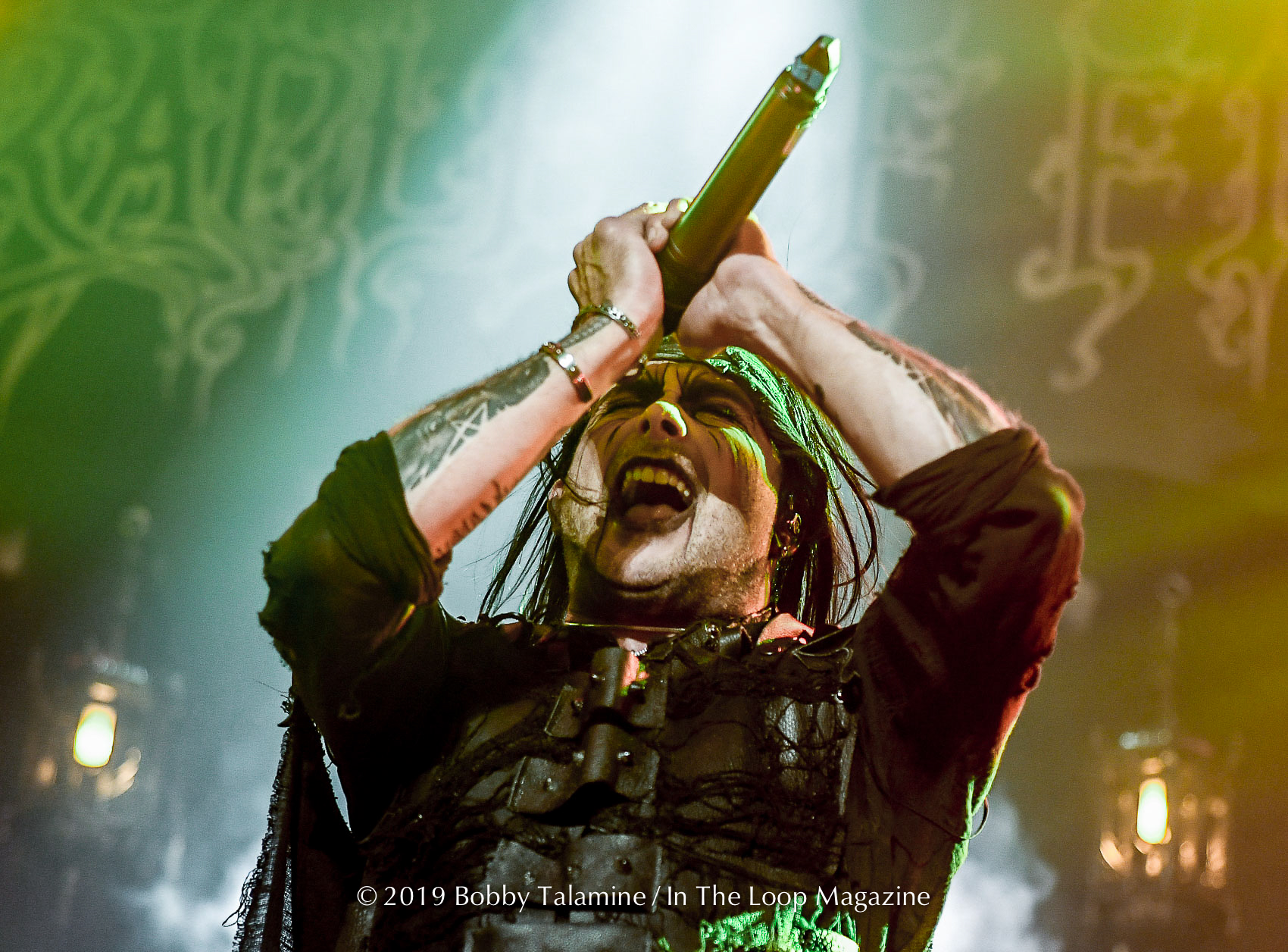 Dark Metal darling Dani Filth is back, and front and center in all things sinister and embracing mortal sin that is his baby: Cradle of Filth.

On his current “Cryptoriana World Tour” with a stop on a Monday night at the House of Blues in Chicago- Dani’s current production is not for the weak at heart: Makeup full on and the stuff of nightmares, costumes and boots looking more sharp and violent as ever before.

Currently enjoying a creative spark that is pushing the band to greater heights, met with a band and songwriting that is furious in scope and riveting to the core, the band consisting of course with Dani on Lead Vocal, Guitarists Ashok and Richard Shaw, Bassist Daniel Firth and Keyboards along with backup Vocal provided by the chanteuse Lindsay Schoolcraft, along with drums and Percussion provided by mainstay Martin Skaroupka, are showing to everyone within earshot that they are as potent as ever, with a worthy fight to perform live, and bring their vision of all things that are sensually grotesque and visually stunning to the faithful and devoted.

When seeing and hearing Dani perform live, what with his upper register shreeks and full on sharp shrill cries of despair not missing a note- you have to sit in amazement in what he’s accomplished over all these years, and embrace the moment.

This kind of heavy vocal, maintaining the luster of youth, clearly is not meant for when you’re getting older and in your senior years.

Unfortunately I could be wrong, but it has a mystique of a short shelf life.

So take advantage of seeing him and his band while you can, because Dani is at the pinnacle of this type of extreme and and symphonic metal.

Dani’s clearly embracing this particular performance, what with his right hand and fingers in constant twitching movements, like he’s sending out a morse code of sorts of all things intense and bewitchingly sinister.

Dani sure plays his part to the hilt, with wicked face paint, eye lenses more creepier than ever, full on black cape and gear meant to bludgeon anyone that comes close for a takedown.

He wreaks vengeance on stage, gazing out directly to the back of the venue, watching intently when not singing at the swelling and contorting mass of bodies on the main floor of the House of Blues.

Everything is meant for shock value at a Cradle of Filth show, and what better way to push their brand of metal front and center to the extremes than with two guitarists who know how to play the part of diabolical, and using every inch of the stage, from right to left.

Dani and his band Cradle of Filth continue to press forward performing live, no matter the size of the venue, resisting at every turn categorization, and providing a relentless musical production worthy of a warped opera with those in attendance draped in all things black and horror goth and downright cool and fun.

Had a great time photographing and reviewing this show, and seeing Dani bringing his genre of music which is still so fresh and invigoratingly unforgettable.

For photos of Cradle of Filth live in Chicago at the House of Blues, click here

3. Right Wing of the Garden of Triptych

5. Bathory Aria: Benighted Like Usher / A Murder of Ravens in Fugue / Eyes That Witnessed Madness

7. Dusk and Her Embrace

8. You Will Know the Lion by His Claw

9. The Promise of Fever

14. From the Cradle to Enslave

Joseph Michael Poole, best known now as Wednesday 13, is the perfect modern day ghoul, like a warped and twisted offspring from all things Glenn Danzig and The Misfits, and I’m not saying that as a bad thing at all.

Clearly the similarities are with The Misfits, what with the iconic skull as a reference point for all things the Misfits, whose iconic logo features  a skeletal figure  inspired by a poster from the 1946 film serial “The Crimson Ghost”.

Clearly the ideal of Wednesday 13’s embracing theatricality and all things “Horror Punk” are evident, and when done with thought in mind and a history of defining the term “Stage Presence”- it without a doubt works on many levels as a most memorable show, even if you’re opening for Cradle of Filth, and not headlining on your own.

Having exhausted all possibilities in coming to grips with all things Wednesday 13, what’s left?

The music of course.

And it’s punishing, and polished.

Joseph Michael Poole has worked with other quality bands to refine his style of musicianship and defining on his terms what it means to be a leading man, with the band Murderdolls as the most memorable amongst others.

But I have to stop there with all these insane back references.

Wednesday 13 have been around for awhile now, having released seven studio albums up to the present day, which says a lot when you have a band as tight as this: Wednesday 13- front and center on Lead Vocals, Roman Surman on Guitar, Jack Tankersley on Guitar, Troy Doebbler on Bass, and Kyle Castronovo on Drums and Percussion.

Wednesday 13’s set was fierce and entertaining from beginning to end, making it so worthwhile to arrive early to catch their set, with so much going on visually for the first three songs from the pit: from the cloaked ghoul that was Wednesday 13 bathed in heavy neon blue light front and center, then to revealing lively fluorescent body paint that was visually striking with rich hues of neon green and more neon blue, and a backwards costume mask that when put on, made you think Wednesday 13 was contorted miserably on a stage riser next to his guitarist when belting out a song.

All of this adds up to a maddening and relentless onslaught of pure Gothic / Horror Metal of the finest order, a band worthy of opening for Cradle of Filth, equal to the headliner in brandishing their own unique style of music to keep the audience entertained.

Definitely not a dull moment to say the least.

For photos of Wednesday 13 live in Chicago at the House of Blues, click here

The band Raven Black, hailing from Los Angeles California, are a theatrical metal act, with a stage presence that’s steeped in a warped and diabolical carnival show, with plenty of twisted stage props and costumes and makeup that’s meant to entertain and keep you spellbound.

Raven Black, led by the lovely and oh so fierce Raven Black (by the same name), certainly knows how to enter a stage, massive umbrella in tow, with mischievous makeup and eyeliner that is the stuff of nightmares- but when viewing this spectacle, opening for Cradle of Filth, you have to give her credit in the production, with costumes and props to fit the occasion for each and every song.

I mean Raven switched gears for every song, even to the point of utilizing a hula hoop to the heavy beats provided by the band, with Muppet on Drums and Percussion, The Doctor on Lead Guitar and Vocals, and Stitches on Bass.

Now that’s saying something, when you jam away and sing lead vocal center stage, and not skip a beat while swinging your torso with a hula hoop.

Raven Black were allotted only a half hour for their set, but having said that- they were oh so entertaining from beginning to end.

Would love to see more of Raven Black, since the potential is clearly there with her band to display their unique brand of over the top and twisted carnival metal, for lack of a better term.

For photos of Raven Black live in Chicago at the House of Blues, click here