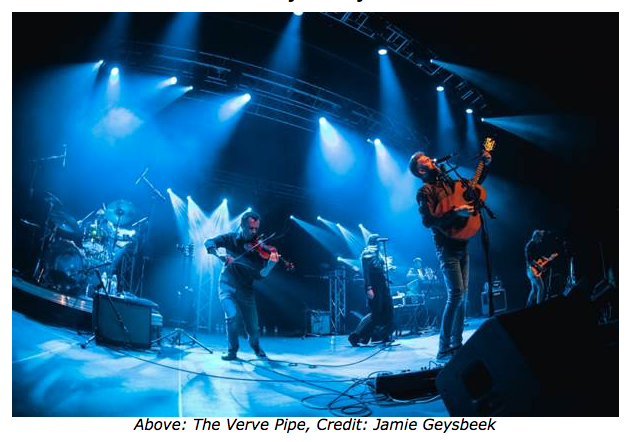 Multi-platinum alternative rock band THE VERVE PIPE will be heading out on combining their full electric rock show with their stripped down, intimate acoustic/electric stylings including a stop in Chicago, IL on Friday, March 29 at City Winery.

After garnering worldwide recognition for their radio hits “Photograph,” “Hero,” “Never Let You Down,” and their classic 1997 #1 single “The Freshmen” along with a feature of the song “Colorful” featured in the 2001 movie Rock Star – THE VERVE PIPE have managed to maintain their legacy over their 25+ year career by expanding their musical boundaries and honing in on their powerful live performances.

Of their live show, Cryptic Rock writer Katherine Szabo noted, “There are not many bands who can still keep the creative ball rolling for over 25 years, but The Verve Pipe refuse to be stopped…All in all, The Verve Pipe put on an amazing show full of surprises and old favorites, proving that their live performance is only getting better with time and experience” (1/22/18).

In addition to recording rock albums, THE VERVE PIPE expanded their repertoire in 2009 to include writing and recording A Family Album, their critically acclaimed introduction to the world of children’s music, as well as their 2013 follow-up family oriented release, Are We There Yet?. THE VERVE PIPE have continued to perform both rock and kids shows throughout North America, including notable appearances at Lollapalooza, Austin City Limits, Lincoln Center, Hangout Music Festival, SummerStage in Central Park and many more.

Coming Back To Chicago For Round Two, Jeff Lynne's ELO Return To United Center With Dhani Harrison As Opener Anvil @ Reggies Rock Club