Anvil, Still Pounding The Pavement And Influencing The Metal World 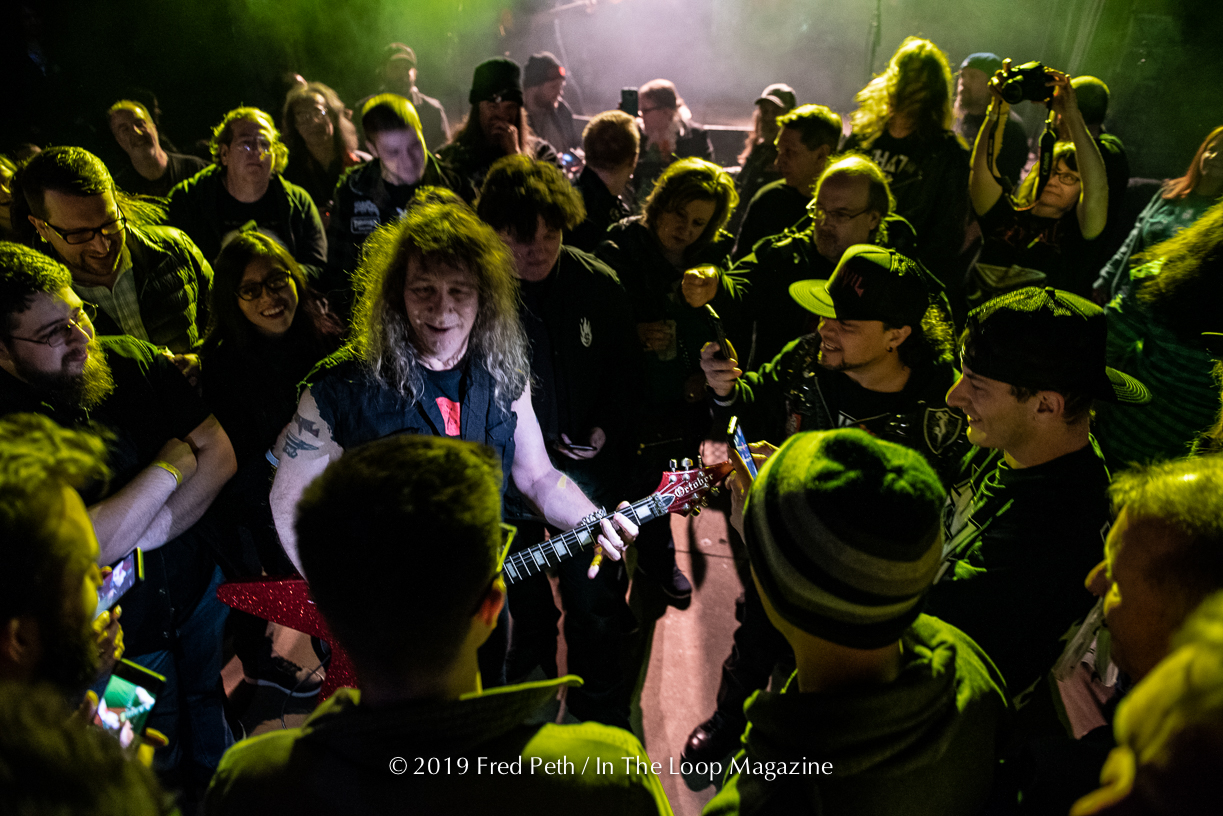 The three men that make up the legendary band, Anvil, were back rockin’ Reggie’s. Just about a year ago was the first time I saw them live. They brought another great show that the small and intimate crowd loved. The crowd’s size was probably due to that most of Chicago was out reveling for St. Patrick’s Day weekend, which made the night more enjoyable for the dedicated Anvil fans.

Steve “Lips” Kudlow (lead vocals and rhythm guitar) was having a great time on stage playing with his long-time friends Robb “Robbo” Reiner on drums and Chris Robertson on bass and backing vocals. In between his playing, he would tell jokes and a couple stories of his trip down memory lane in the music industry and when they opened up for Motörhead. He told the crowd with a big smile on his face that he enjoys coming to play in Chicago and looks forward to it each time they are on tour. I can tell you that the feeling is mutual. Chicago loves having you guys come down from Canada pounding our faces with your music. Lips even made reference to the crappy job that he has not had to do for 12 years, since their documentary Anvil! The Story of Anvil came out, which got a big applause and cheers from us.

Their setlist hit on songs as far back as their first album Hard ‘n’ Heavy, which came out in 1981 and included Doing What I Want and the tongue-in-cheek Bitch In The Box from their latest album Pounding The Pavement. Could the song be the creation because the band has gotten lost on tour in the streets of America, similar to the way Spinal Tape got lost in Cleveland looking for the stage?

Lips showed his ultimate love for the audience as he walked down from the stage into the crowd where he played to open their set, while fans took photos with him. Lips made his way back to the stage to join Robb and Chris to conjure the craziness of the night and start with 666 from their 2nd album Metal On Metal.

Robb and Chris played well off each other as Lips belted out the lyrics to Doing What I Want with an ear-to-ear smile on his face. Chris got his time in the limelight to play a mini bass solo as he jumped up and down during Winged Assassins. Robb’s turn to take center stage came during Swing Thing. He showed the crowd, during his pounding drum solo, why many of today’s drummers speak highly of him.

Being the fun characters that they are, Chris and Lips chased each other on stage while they played Running opening the encore. The night would not be complete without them covering Steppenwolf’s Born To Be Wild. A great version of it as the audience sang along and getting a great big smile from Lips. Lips thanked the enthusiastic crowd by talking into his pickups on his guitar. Ooohhh baby this was a fun night filled with badass rock ‘n roll!

For photos from the Anvil show at Reggies, click here