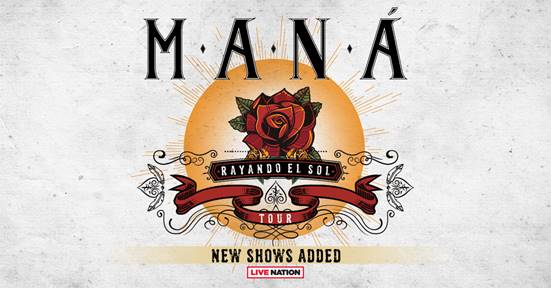 “Maná is a touring powerhouse. I’ve never seen an onsale like this in the Latin Market.

This puts Mana in the rarefied realm of the biggest bands in the US regardless of language.”

– Bob Roux, President of US Concerts for Live Nation.

By Popular Demand, These Additional Maná Shows Will Go

LOS ANGELES (March 04, 2019) – Proving once again why Billboard has hailed Maná as “the most widely sold and heard Latin band in the world,” the powerhouse quartet’s upcoming “Rayando El Sol Tour” has just scored the strongest U.S. on-sale yet of their unrivalrd three decade career. The desire to see Guadalajara’s legendary Latin Rock ambassadors during their first tour in three years is so strong that, following Friday’s initial on-sale, an additional seven arena dates have quickly been added to meet the outpouring of fan demand.  Of special note, is the addition of a fifth night at The Forum, which not only surpasses Maná’s own Latin music record for the famed Los Angeles venue, but also puts the band in the same pantheon as Eagles, U2, Fleetwood Mac and Kanye West for five or more shows at the building on one tour.

Maná will also offer VIP packages for each show with options that include; premium seating, an invitation to Maná’s VIP pre-show lounge, the opportunity to sit at Alex’s drum kit for a memorable photo, and much more! Fans can visit www.VIPNation.com for more information.

Having formed in Guadalajara, Mexico in 1986, the quartet of Fher Olvera, Alex González, Sergio Vallín and Juan Calleros have gone on to be global envoys for the Latin Rock genre, while selling over 40 million albums. Here in the United States, Maná holds an impressive nine #1 albums and ten #1 singles -more than any other band in the history of Billboard’s “Hot Latin Songs” chart. Maná is also unquestionably the top-drawing all-Spanish language concert band in the U.S. with notable attendance records to their name, and the New York Times declaring the group has: “Redefined ‘Crossover’ in Latin Pop… with its mix of love songs and more pointed political material about immigration and the environment, …Maná has a mass appeal nearly unrivaled in the Latin pop world.”