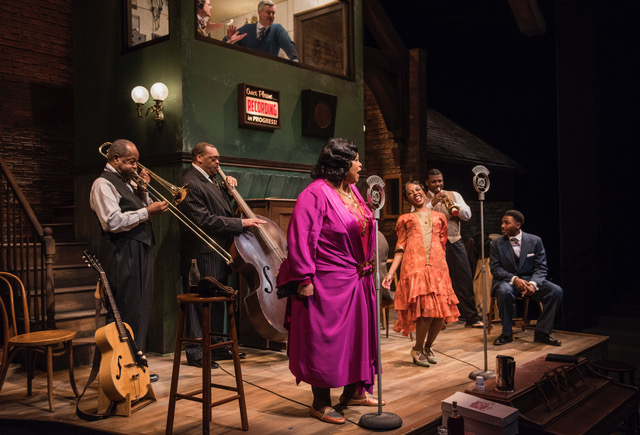 Writers Theatre’s production of the August Wilson play “Ma Rainey’s Black Bottom” is directed by the inimitable Ron OJ Parsons, and like all of Parsons’ treatments on Wilson’s plays, the production has notable strengths: the cast, led by Alfred H. Wilson, Kelvin Roston, Jr., and Felicia P. Fields, is uniformly excellent; the scenic design (by Todd Rosenthal) is first rate; and the lighting (by Jared Gooding) is marvelously precise. However, all that talent cannot hide the fact that “Ma Rainey” is among the weakest plays in Wilson’s esteemed Pittsburgh Cycle.

Set in Chicago in the 1920s, “Ma Rainey” is a day in the life of black blues musicians at a white-owned recording studio. Across two cleverly arranged stages – one the band’s rehearsal space, the other the recording space – we learn about the characters, their motivations, and in classic Wilson fashion, the subjugation and oppression that haunt them from day to day. Wilson loved his archetypes, and “Ma Rainey” is filled with them: Levee (Roston) is the talented but impatient trumpeter with visions of grandeur; Toledo (David Alan Anderson) is the irritating nationalist who knows all about “the white man” and his mischievous ways; Dussie Mae (the promising Tiffany Renee Johnson) is the sexpot whose sole purpose in the show, from what I can tell, is to look beautiful and kiss Levee; and Sylvester (Jalen Gilbert) is the well-meaning simpleton with a speech impediment; all these characters have been seen, in some form or another, in Wilson’s other plays.

Which leads me to the big rub with this production – despite the talented cast’s efforts (and they put their all into the roles, particularly Roston), “Ma Rainey” eventually feels like a less focused, sloppier version of “Seven Guitars,” to say nothing of Wilson’s many other productions. We know what is in store: meandering dialogue among characters with no attention to verisimilitude, let alone authenticity; reiteration after reiteration of the play’s themes; shallow white characters (Wilson’s white characters are either hapless, conniving, or unrealistically good); and elongated monologues where characters recount the horrors of the Jim Crow South (which, strangely, go unmentioned afterward).

Someone who is unfamiliar with Wilson’s work may very well enjoy “Ma Rainey’s Black Bottom.” But for someone like myself, who has seen all but two of Wilson’s plays, the material will feel at best familiar, and at worst, tired.

Wax Trax! Records And Industrial Music Fans Will Rejoice For One Night At House of Vans In April Rainbow Kitten Surprise @ The Riviera Theatre