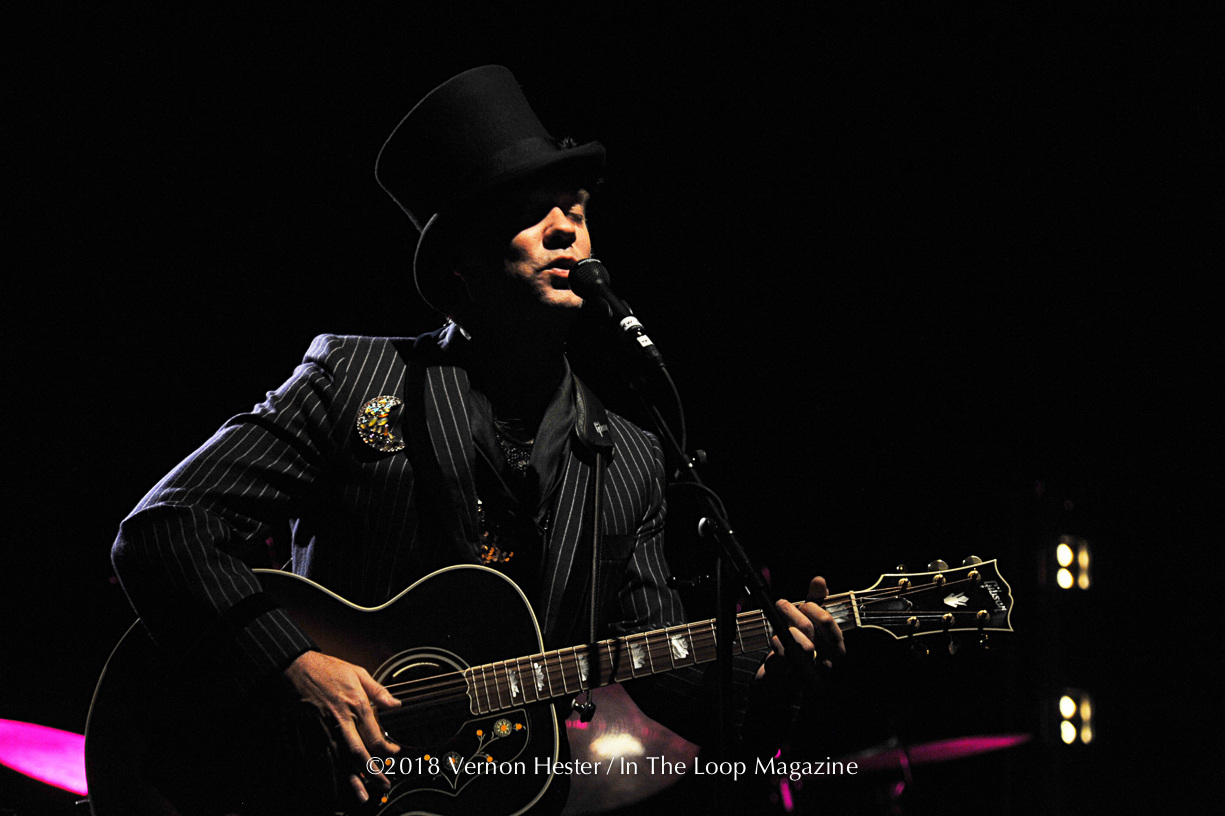 The first time I ever laid eyes on Rufus Wainright was on a blistering August day in 2002 behind the Allstate Arena. I was standing with Phil Bonyata, a fellow photographer, waiting to go in to shoot Roxy Music on their reunion tour when suddenly a screaming woman and a rather fey man came bouncing out from around the corner. When the woman shrieked, “But Rufus, you can’t DO that!!!!,” the gig was up (Wainwright was the opening act). After graciously whipping off an autograph he darted in the back door like a whiff of vapor.

Granted, that’s not much of a memory, but it does give Wainwright’s latest tour, the All These Poses Tour, an interesting context. After his self titled debut dropped in 1998, his sophomore effort, Poses established him as a major talent with more than a passing resemblance, musically, to Bryan Ferry, Roxy’s front man. Both have elegant vocal ranges that broaden the very idea of rock and roll and both voices carry a strong unmistakable aroma of melancholy. But where Ferry has been rightly called a lounge lizard (all those tuxedos, sad love songs and that over reaching opulence have trapped him in his own image) Wainwright has, over the course of seven albums proven himself to be somewhat unpredictable. As the son of folksingers Loudon Wainwright III and Kate MaGarrigle, junior has managed to take all that the family name promised and taken it to unexpected places. I mean really, this guy has written an opera (and is currently working on another) and devoted an entire album to Shakespearean sonnets, while popping up in several movies without seeming to take a break. And if you must say something about his queerness, you can’t deny that he’s used it to great effect; who else would record a live album in Carnegie Hall which paid homage to and celebrated Judy Garland’s legendary comeback concert there forty years before (for the younger generation who only knew of Garland from The Wizard of Oz, Wainwright rightfully put a spotlight on one of the greatest voices ever). Still, this anniversary show on November 20 at The Vic was not only grand, generous, and extremely gratifying, but full of hidden surprises as well.

Once the sold out house sat down (odd to be in The Vic for a seated show), opener Rachel Eckroth set the tone of the evening with a too short set of new music from her recent release When It Falls (Virgo Sun Records). Accompanying herself on keyboards, Eckworth’s articulate and precise songs seemed to skirt melancholy and the dramatic without careening into either. Her set, which included “Dark Waters,” “It Never Was,” “The Wasted Years,” and “Strangest Dream,” was patient, alluring, and articulate and seeing her with a full band as a headliner would be worth looking forward to.

Wainwright opened his set with a naked  acoustic version of “April Fool” and “Barcelona” dressed in a top hat and a black waist coat and the sight and  sound of him suggested an evening of stark confessionals. That didn’t happen as he quipped, “Thank you all, I love big crowds…happy, angry crowds…but I prefer happy crowds.” In other words, this show was not going to be a drippy tear drenched downer.

As he wound through both his debut and Poses he told stories about his famous mother and writing “Beauty Mark” which she loved. He spoke of his adulation for Leonard Cohen and the high school period which inspired “Millbrook.” Toward the end of the first set he jokingly spoke about participating in a tribute for Joni Mitchell and lusting to sing “Both Sides Now,” only to be bested by Seal who he said with a touch of facetious jealousy, “knocked it out of the park.” He closed the set with the evening’s only new song, “The Sword of Damocles.”

After a brief intermission Wainwright re-emerged for a gently galloping strut through “Cigarettes and Chocolate Milk” which set the second half of the show on a more relaxed and, sometimes giddy trajectory. “California,” The Consort,” and “In A Graveyard” had bounce but his cover of his father’s “One Man Song” literally boogied. “Going to a Town,” which was written as a comment on George W. Bush’s presidency had an unexpected bite given the new guy in office with the chorus, “I’m so tired of America…,” generating a laugh throughout the theater.

For an encore he closed the show with a wistful take on “Across the Universe” which gave the night a rather cuddly close.

All of what I just wrote is a quick summation of what happened, but in no way describes the tone and balance of this show. Wainwright’s voice has obviously grown deeper and richer (after this show I went back and listened to the debut and Poses again and there is no comparison) and everything he played, even the covers had a gravity to them which was lacking before. Better still, that melancholic lazy whine in his tone has become less studied and more nuanced; his voice  has flourished and developed beyond expectations and he does not sound nearly as dour. In fact Wainwright seems to have harnessed that tone and given it more agility and finesse. Though I won’t come out and make a comparison, it reminds me of when Frank Sinatra left his big band pop phase and dove into his rich mid-career Reprise Records phase in the 1960s (September of My Years, A Man and his Music, It Might as well be Spring ). Which of course implies that Wainwright may be headed for an even richer creative future.

Funnier still, Wainwright didn’t seem to take this show so seriously and he seemed to have as much fun as his audience. His wardrobe and costume changes were not only elegant but gently weird. At one point he wore what looked like a floor length cape made entirely of crows feathers, at another a see through black mesh blouse with the word “NO” sewn over his chest, and at another a coat which looked like it was made of crumpled bits of Christmas gift wrap. And of course the stories and jokes. The fourteen year old composer Rufus being mentored by his famous mother (“Rufus, this is shit!!! You’re all over the place!!!”), his sight seeing excursions in Chicago earlier in the day (he indulged in meatballs at Ann Sather, and got turned on by a painting in the Art Institute.), and those stories about Leonard Cohen, singing Joni Mitchell, and (of course) being Canadian. The All These Poses Show was a lot to take in, and gave us a lot to look forward to.

For photos from the show at The Vic, click here