Returning To The Chicagoland Area For Second Leg Of Tour, Ministry Sell Out The Forge In Joliet And Bring A Surprise Guest 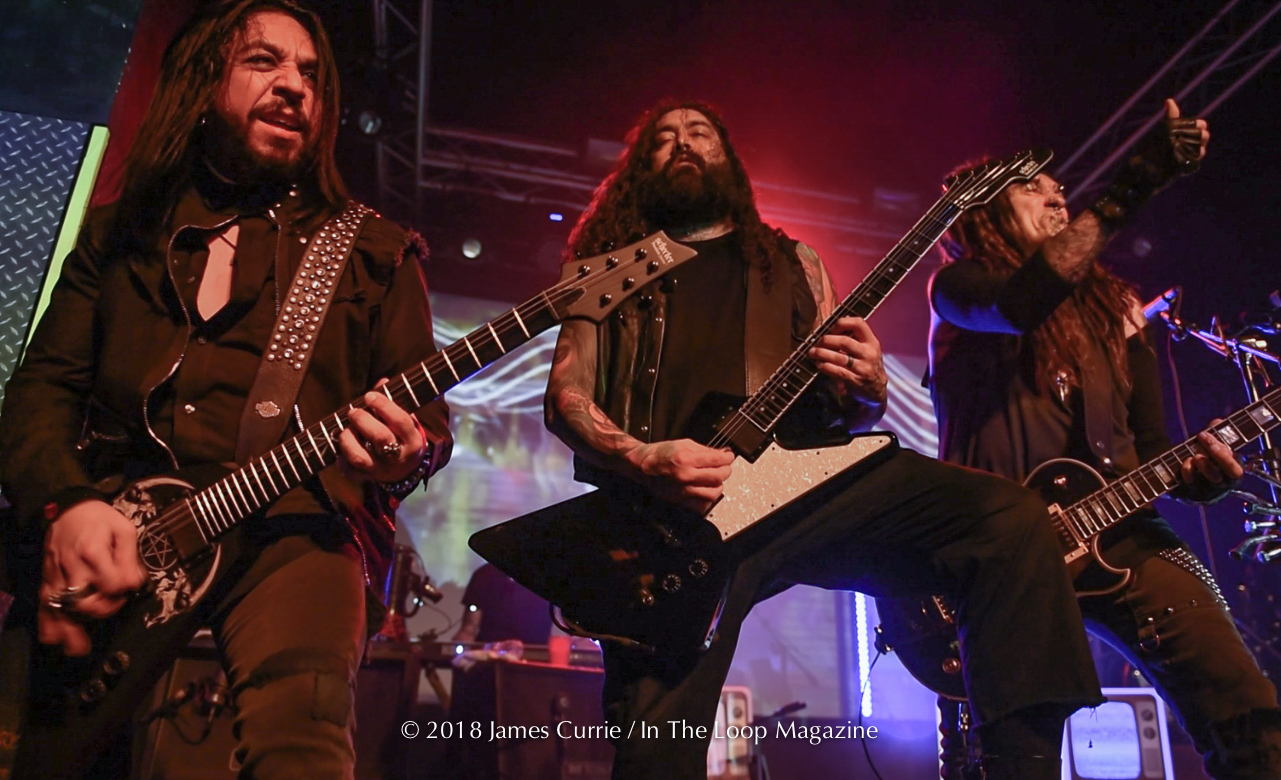 Celebrating not only the release of the much acclaimed “Amerikkkant” album but also the 30th anniversary of the groundbreaking record “The Land of Rape and Honey” it only seemed fitting the tour to stop in Joliet, IL a city where plenty of songs from TLORAH were played on the famous ‘chain link fence tour’ of 1990, right around the corner from The Forge at the Rialoto Square Theatre.

As a venue, The Forge is a nice sized room, surround balcony, excellent sound system and aggressive booking that is really making it a juggernaut in the greater Chicago market.

As for the show: the opening band, Alien Weaponry, a few teens from New Zealand with an old school metal approach – warmed up the crowd nicely with a set tribal thrash in the vein of Sepultura *but not quite*. The boys oozed confidence and it was funny to learn that their tour manger is their father, as he is also needed as a guardian to allow them to play some venues! (promoters must save on booze costs on the rider!)

Next up, the reason we are here: MINISTRY! Rumors of the set list additions from TLORAH have been rampant all over the interwebs so the surprise wasn’t going to be there, but the anticipation was still there.

*but first* Amerikkkant played in it’s entirety. This reporter had the pleasure of jamming an advance copy and doing a review for ITL mag last Spring, lucky me! The live presentation really brought this to life. If you havent seen ITL’s main man, Jim Currie’s, cool behind the scenes expose` with John Bechdel on playing keys for Ministry do check it out.  It really shows the layers that go into a song and all the nuance that is there – even if you dont know its there. This album is fantastic, and the depth is certainly there. Not the same as the ‘Bush trilogy’ years of a more thrash approach, this record is deep, brooding and full of atmosphere – and its a joy to hear live. When you have 14 or so records to choose from on a tour like Ministry does, you know you wont be hearing some of these songs again live, so soak it in and enjoy.

After a short break Al comes back to the stage with a treat of all treats, the first time the song ‘The Land Of Rape And Honey’ is being played live in 25 years – YES! Fat synths, orchestral hits, chanting vocals – it was all there and the audience ate it up like the turkey dinner they sucked down just a week earlier, but this tasty feast had more meat and less stuffing by way of an audio onslaught: The Missing, Deity, Stigmata, Just One Fix, NWO, Thieves and then… to close it out, enter stage right: Chris Connelly to help blast ‘So What’. Reunited and it sounds so good. It’s good to see fences (chain link staged fences?) being mended in our old little industrial world. Life’s too short, right? And there’s too much talent out there making music for these legendary collabs to be left on the table. And with the 30th anniversary of The Mind Is A Terrible Thing To Taste coming up next year, what’s next Al? One thing for sure, hearing songs from TLORAH live was a quick reminder: that album sounds as fresh live now as anything thats being produced in 2018 and that is a testament to how ahead of its time it was.

For photos from the Ministry show at the Forge, click here

For bonus photos from the show (in honor of Al’s 60th birthday), click here for 60 bonus photos

Watch, The Land of Rape and Honey, performed live for the first time in over 25 years, click here

Setlist: Ministry live at The Forge in Joliet Illinois, November 27, 2018

Set 1: Amerikkant in its entirety

2. Victims of a Clown

1. The Land of Rape and Honey

8. So What (Featuring Chris Connelly)