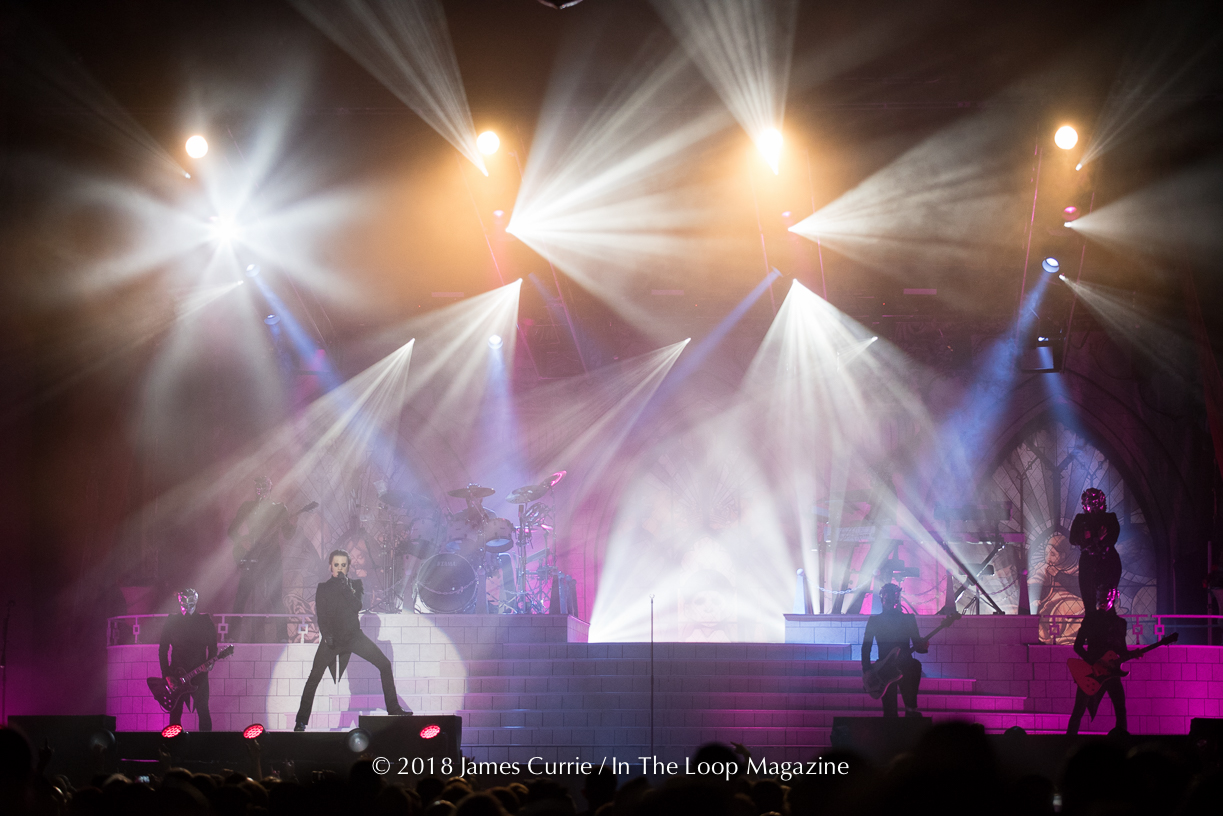 Ghost played for nearly three hours to a packed shoulder-to-shoulder congregation. They are currently supporting their latest album, Prequelle, on the ‘A Pale Tour Named Death’ tour. Aside from all the controversy of legal battles and satanic worshipers (just kidding about the latter) they are one of the most coveted live bands around today.

I have been to a number of their live “rituals”, but this was the first time I would see Tobias Forge as Cardinal Copia. Forge’s anonymity was brought light when his former band mates, or hired guns if you will, sued him. This would also be my first time seeing the band with the completely new and expanded to the eight-member line-up.

I was definitely excited to see their stage setup in the largest indoor venue in Chicago they’ve played so far. It was impressive and massive to say the least. It consisted of two huge marble-tiered risers, one on stage left for the keyboardists and one on stage right for the drummer. They were split in the middle by a grand staircase as another access point for Cardinal Copia and the Nameless Ghouls to enter. The enormous backdrop portrayed a limestone wall, which had three arched stained glass windows in it. The light show throughout the night also gave a great feel of a ‘heavenly’ presence amongst us.

The band came out to the song “Ashes” with the Ghouls taking their stance spread out evenly on stage. Cardinal Copia entered from stage left just as his vocal part started on “Rats” to thunderous cheers. The Ghouls and Copia were dressed in all black with the Ghouls wearing their chrome devil horned masks that have been part of their image since 2015. Although they seem to be going through a change as well as the masks, originally closed mouth, now have missing pointed closed mouth chins replaced with an open gap. Will the Nameless Ghouls sound morph into vocal characters? Time will tell. “Rats” was the first single released from the album Prequelle and is a complete change from their previous material. It has a poppier sound that still fits with their heavier songs. The band is evolving in many ways.

The Sisters of Sin were not on this tour, but to go along with the story line, Papa Emeritus Zero, a.k.a. Papa Nihil, came and did his saxophone “solo” back-tracked during “Miasma”. The crowd gave him a round of applause and screams during his performance. Fans first saw this Papa in Chapter One: New Blood, the teaser video when a new incarnation was going to lead the band Ghost for this next round of music.

Cardinal Copia’s first costume change of the night was at the beginning of “Jigolo Har Megiddo”. This time wearing a white leisure suit with a black hat, black gloves and carrying his black cane. Kind of reminiscent of the old 1970’s SNL character Father Guido Sarducci. Copia joked with the crowd about getting a “really bitchin’ entrance”. This was the mellow part of the night as the crowd enjoyed the guitarist playing on the grand staircase while the faithful followers sang along with the Cardinal. They continued the calm pace with “Pro Memoria” and closed Act I with “Life Eternal”. An announcement came over the loud speakers telling us that we had a fifteen-minute intermission to prepare us for the second coming.

Act II brought another costume change for the Cardinal and not his last. This time he was wearing his scarlet garments as he brought the crowd to sing, “Spirit” with him. This half of the show definitely held up comparing it to the first. Filled with plenty of fan favorites from all their albums and the band’s first time using confetti towards the end of “Mummy Dust”.

Cardinal Copia took the time to introduce his band during an extended version of “If You Have Ghosts”. “Ladies and Gentlemen…give it up…for…ggghhhhooouuuulllll!” Copia shouted. Each time the crowd cheered and screamed even though fully knowing he was going to introduce the rest of each of the members the same way that is of course until he introduced the keyboardist and backup member. These two female members were introduced as, “The Ggghhhhooouulllleetttttteeessss!”

One of the biggest songs off of the Prequelle album “Dance Macabre” was next on the setlist. The entire congregation was singing and some were dancing as Copia belted out the lyrics and the band rocked it behind him. Keeping the intensity up they went right into another hit from the album, “Square Hammer”. Most of the crowd was clapping along during the intro of the song.

As the band has done many times before, they ended Mass with “Monstrance Clock.” This was a great way for the diverse crowd to come together and leave as one. The band has been working hard, making a name for themselves from their beginnings in Linköping, Sweden almost a decade ago. They showed they have the staying power and can keep it going for many years down the road. The fans will have to stay tuned to see if Cardinal Copia becomes Papa Emeritus IV, or something more sinister.