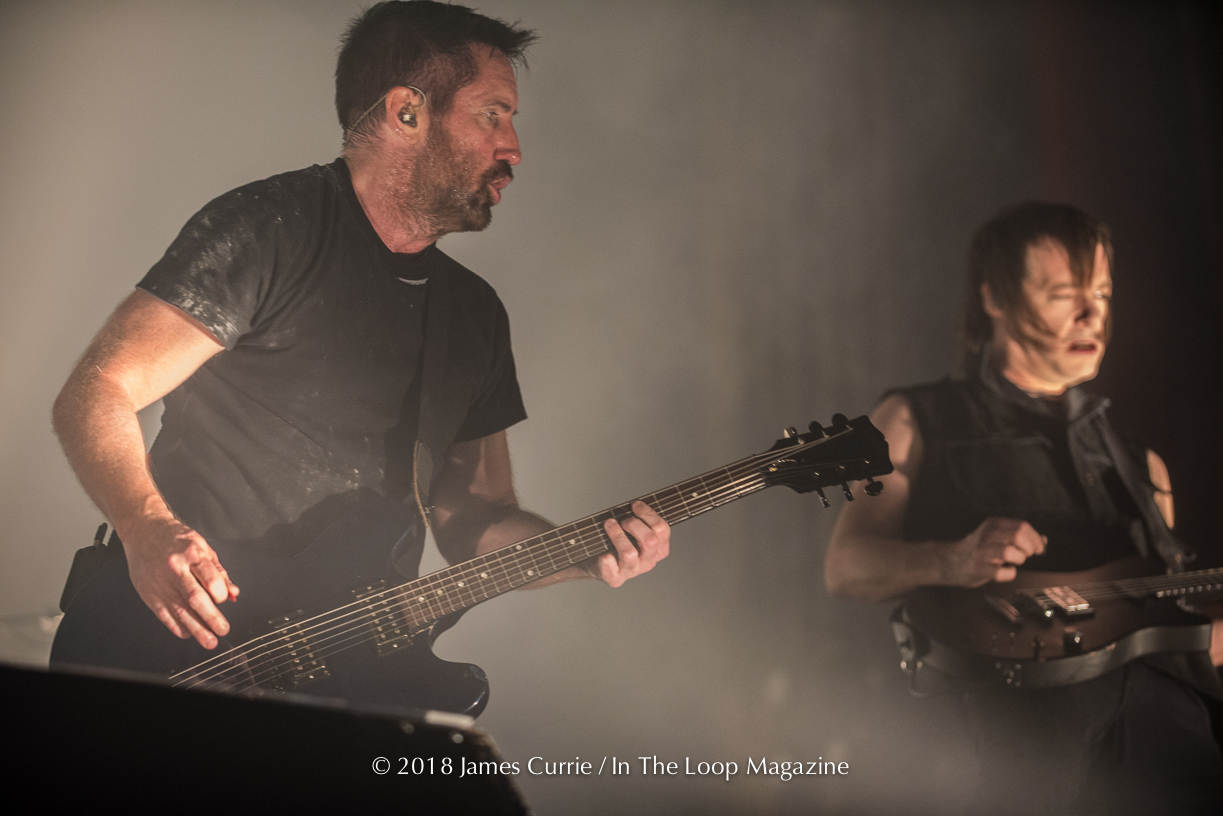 Much has been made, as of late—in this magazine as much as anywhere else—about the resurgence of the ‘90s and its role in both re-establishing bands as still viable, resurrected entities or, at the very least, offering some opportunity for nostalgia.

Nine Inch Nails may be a product of that decade, but they exist somewhere outside of that easy categorization cycle. They never really broke up or ran out of gas the way others did; save for the break between 2002’s live chronicle And All That Could Have Been and 2005’s With Teeth, Trent just went away for a while until he was ready to reemerge as a sober, healthier version of the angry young man he’d been. As a songwriter, anger only gets you so far, and the Nine Inch Nails of 2018 is a very different thing from the Nine Inch Nails of the ‘90s. That’s a good thing: ‘90s Trent took his anger down a creative but self-destructive path, while the Reznor of today seems to balance his anger with reflection, more often than not. Which is to his credit, as the apocalyptic visions of capitalism run amok in NIN’s lyrics have largely come to pass.

To that end, we have the Cold and Black and Infinite tour as catharsis, and catharsis it was on the first of three sold-out nights at the Aragon Ballroom.

The setlist for this tour has been an ever-changing, metamorphosing thing of a super fan’s dreams, and the first of the Aragon shows was no exception, as the band had only just finished the savage onslaught of opener “Mr. Self Destruct” before trotting out the white whale of NIN fandom: “The Perfect Drug,” in all of its frantic drum-and-bass glory, and it was all blazing intensity for another few tunes before the Atticus Ross collaborations began to find their way in.

Reznor’s partnership with Atticus Ross has turned out to be one of the great meeting of minds in music, the most relatable one that comes to mind being Fripp and Eno, as its a case of two musical visionaries finding common ground and learning to play to each other’s strengths. Throughout the series of EPs that have come from Reznor and Ross’s work together, there’s been a tangible, organic sense of moving forward arguably unlike any other phase in Reznor’s career. Live as on record, tracks like “Ahead of Ourselves” and “Less Than” are all the best parts of ‘classic’ Nine Inch Nails, but when thrown in with more abstract cuts like “This is the Place” and “God Break Down the Door” (the latter of which featured Trent on sax), you got a sense of that shared, elevated vision. “Gave Up” was a seizure-inducing rager featuring the biggest strobe lights mankind has ever seen, and “I’m Afraid of Americans,” the now-classic collaboration with David Bowie, proved to be as prescient as it was relevant.

Thirty years into his career as one of the most consistently engaging and creatively confident artists we have, Trent Reznor is still focused on moving forward, but he’s long ago made peace with the scope of the band’s fame, cementing their status as that rare band that exists outside of genre, era, and cultural cycle. Springsteen is the closest thing that comes to mind as an artist with a unique voice who has realized his place outside of the traditional scope of generational popularity; Reznor seems to have realized his role in that sphere as well, his early lyrical visions of death, madness, and mortality having remained in focus but tempered with a stronger, more distinct sense of social commentary.

“Time is running out,” Reznor croons on “Over and Out” from new EP Bad Witch, and it’s a great example of a track that comes across almost more effectively as a transition piece between other songs in a live context. NIN have had these moments over the years (the instrumental pieces from The Fragile being the most obvious example), but perhaps never to such effect. You couldn’t help but wonder who—or what—he was talking about. Maybe himself, maybe us. Maybe both.

March of the Pigs

This Isn’t the Place

God Break Down the Door

The Hand That Feeds

All the Love in the World