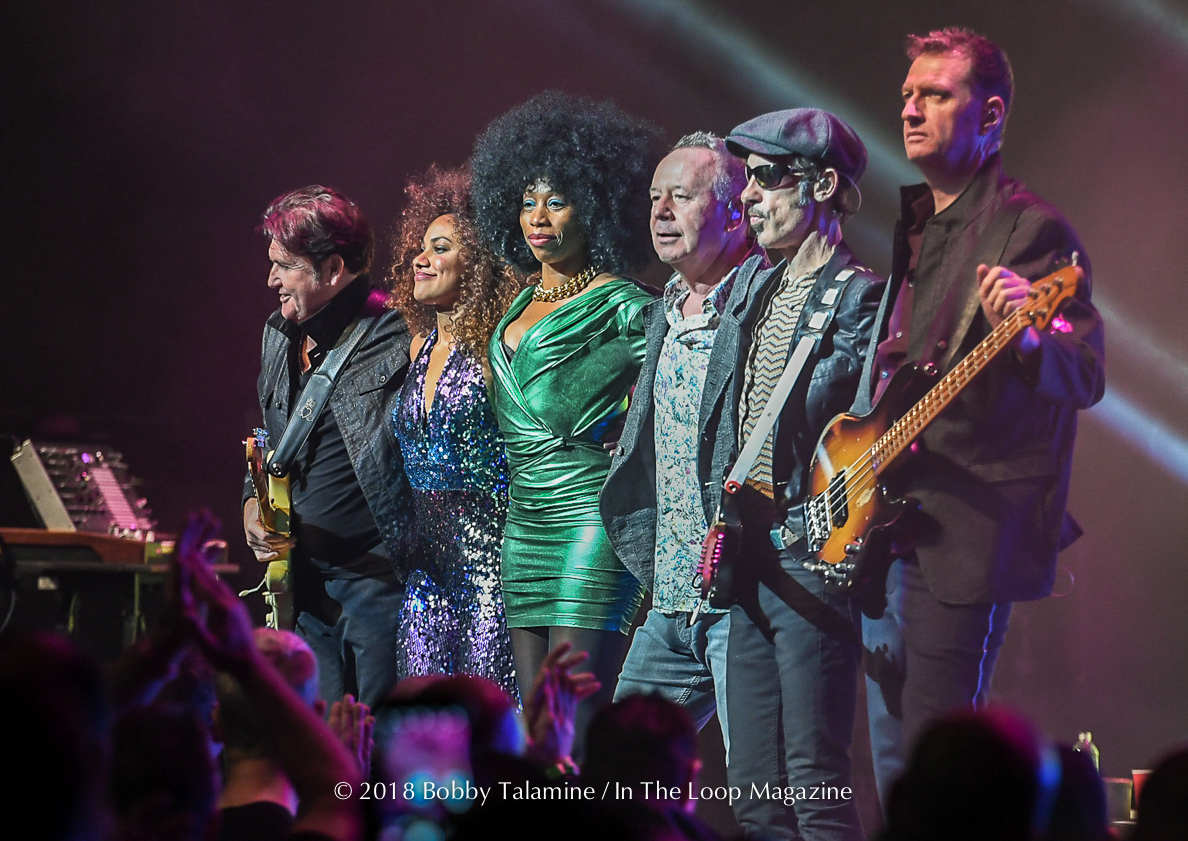 Simple Minds are in town, and it’s definitely a cause for celebration. I can’t remember the last time they came through town, but two shows come to mind: the first was back in February of 1995 at the Metro, and the other was when they played the Vic Theatre, but I can’t remember the year. No matter. Suffice it to say it’s been a long long time since the band has come to the states and done a proper headlining tour.

Lead singer Jim Kerr and guitarist Charlie Burchill, the only remaining founding members of Simple Minds, bring with them a vast catalog of music dating back to the late seventies and early eighties, heavy on the art rock, heavy on the post punk, let alone promoting a newly released album “Walk Between Worlds” (hence the title of their North American tour).

Their current touring lineup includes the physical and fluid drummer Cherisse Osei- and let me just say that she’s a beast behind the kit playing live, Ged Grimes on Bass, Gordy Goudie providing additional guitar and keyboards, and Sarah Brown on backup vocal.
Overall, this current version of Simple Minds sound muscular, and intact. It’s also helpful to note that this current lineup of Simple Minds have been on the road a bit, so when finally arriving to Chicago, they’re proving to be a well oiled machine.

Jim Kerr still performs like his life depends on it, ever in the present, ever in the moment- he’s as confident a showman as you will ever find.
Case in point two songs in: “Waterfront”, with it’s heavy floor tom beat and badass bass line to announce the song from the get go, an anthem that circles the masses and entice’s you to unite as one if ever was one written, and of course Kerr sounding as muscular as ever, bringing the song front and center with the refrain:  “Said, come in, come out of the rain”, over and over and over, with the heavy backbeat punishing away from Cherisse on drums, and Ged on bass. This song, from one of their most brilliant albums “Sparkle in the Rain” from 1984, is truly a live favorite, and like most of the setlist from tonight at the Chicago Theatre, a showstopper among showstoppers. And there’s more to come, like a gigantic snowball rolling downhill and gathering speed: “Up on the Catwalk”, “Promised You a Miracle”, “Theme for Great Cities’, “Someone Somewhere in Summertime”, “See the Lights”, and of course the old standby and chart topping hit from “The Breakfast Club”: “Don’t You (Forget About Me)”. And was the main floor of the Chicago Theatre dancing to that or what?

Impressive energy, impressive vibe throughout. Simple Minds are proving once again that they’re a polished machine, and up for the challenge in bringing this vast catalog of songs front and center to the masses, and let’s all get in at the party. It has to be made clear that these songs are not easy to play live, and considering that both Jim and Charlie are into their sixties, well, that’s saying something in regards to this performance, and the revelry that follows. Overall, no gripes here from this reviewer.

They covered 23 songs total, with a short 20 minute intermission in the middle. Not a bad way to end a Monday night in Chicago. Kudos to Jim and Charlie of Simple Minds, keeping their brotherhood afloat, and touring majestically for the masses. Let’s hope they come back again, sooner rather than later.

For photos from the Simple Minds show at the Chicago Theatre, click here

Returning To Chicago For The Third Time This Year, Courtney Barnett Plays Sold Out Show At The Riviera Theatre Simple Minds @ Chicago Theatre