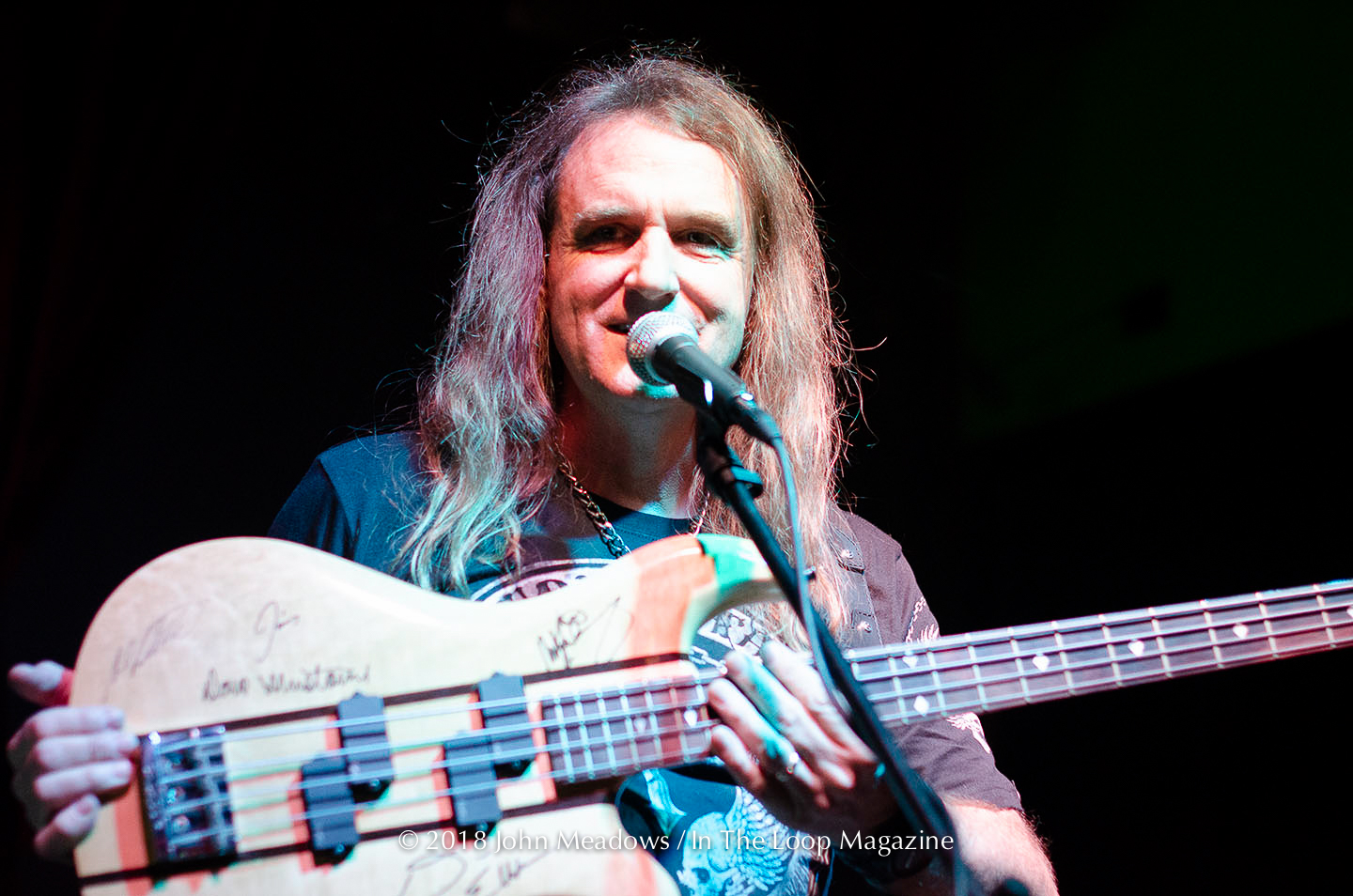 Dave Ellefson brought 35 years of Megadeth to the Brauerhouse with his one-man show, Basstory. Die hard fans filled the bar to hear stories and see Ellefson play some classic bass lines up-close and personal. It was a very special experience for the bass players in the audience, which there was more than a few, myself included.

He sat down with In The Loop Magazine after the show to talk about Basstory, coffee, and Dave Mustaine.

John: We’ve entered this era of bands, sometimes getting back together, doing tours and playing entire classic albums. You’ve taken it one step further, like you said on stage, almost running a bass clinic. Do you see this as a trend? This is a format that I’ve never seen before.

Dave Ellefson: Yeah, thank you, and I appreciate it. It’s definitely a new idea, because the clinics and the music stores have dried up, there’s not a whole lot left of that anymore. So, to take it into the night club is cool, because it feels more like a concert, and to be able to have merchandising available, specifically around the event, and to have VIP experiences around the event. The guitars I play are for sale, you know, they’re meant to be a momento you take home from the event. You know the whole thing is meant to be pretty much an up close and personal VIP experience, and getting to see riffs and things that, you know, in our case, the Megadeth stuff, we haven’t played a lot of those songs in years, that’s why I specifically went deep into the catalogue to pull some of that stuff out…

John: That was great.

DE: …so fans are happy about that. I mean look, the Basstory concept could be something that could be expanded to all kinds of stuff. We’re bringing our friends Bumblefoot to join us for the east coast run, kind of like Guitarstory and Basstory. And, you know, I guess I’m lucky because I’m a player who’s in a band, that, we have so much history around the bass. The bass is a signature instrument of a lot of our songs. A lot of our songs start with bass, or bass and drums, and at times they’re really rooted in the bass. I guess I’m kind of the lucky one on this one, that I get to be able to take this out on the road. And also, to get to tell the stories. I mean, every night there’s a different story I can tell, because different things remind me of different events.

John: Can you retell the story of the fan sending the letter, because that story is fucking fantastic.

DE: Brian Lew, who actually has a book out, ‘Murder in the Front Row’, which, of course, is an Exodus lyric, he ran our fan club. Dave (Mustaine) knew him when he was in Metallica up in the bay area, he basically collected our mail and had a post office box up there. We started Megadeth in June of ‘83, the ‘Kill ‘Em All’ album came out in August or so, September of ‘83. And right around this time, we got a fan letter through the mail box from Brian, and the fan said, “Dude, I hope your new shit is faster than Metallica.”

DE: (laughs) And that just lit a match under Dave. It was almost like, ‘ahh, that’s the secret to our success, is that we’re going to one-up Metallica.’ You know, our poster is even ‘Fast, Loud, and Rude’, and, you know, to be the fastest, most furious band ever. That was the mission statement, that was the goal. That letter really inspired and continued the mission statement of the band. Literally that night we went to rehearsal and all our tempos went up 100 beats per minute. (laughs) And thus, Thrash Metal was born.

John: Now, the EMP music group, that is your label?

John: Do you do booking as well?

DE: We do, we have the ETA, Ellefson Touring Agency. It’s separate from the label, but that agency booked all these dates for Basstory. We have agents in house, one of the agents booked a lot of the early Doll Skin dates for the first couple of years for them as we needed to get them on tour, because that’s one of the hardest things for bands. We’ve signed a lot of young emerging artists, we’ve signed even some legacy artists, people like Mark Slaughter, Doyle, and Autograph, but they have agents, you know, that book them. But a lot of the younger groups and some artists, they get on the label and, man, the next thing is, you got to get on the road. You have to be out playing, because otherwise a record sitting in a record store with no visibility, they’re gonna send it back. Or these days just throw it away, and so then nobody wins. So the ETA concept was to basically have the label, have the agency, we have got all our in-house publicity. We have radio promotion staff that we hire to work records. Every piece of the puzzle that we needed we put together under the EMP umbrella.

John: How do you deal with, I guess we’ll call it “New Media”. Do you find yourself constantly having to put out content?

DE: I think with Megadeth, we’re past that now. There was a period, probably up through ‘Dystopia’, where we were still needing to…I think part of it is because we needed a record like ‘Dystopia’, that was the one be-all end-all, that would top anything we had done in the past bunch of years. I think the ‘Risk’ album, was an album that due to management, direction, and stuff, was misguided, you know? We weren’t really ready to make the album, and I tell ya, it took frickin’ fifteen years, twenty years to recover from it, you know? Because, thrash fans are die hard, man.

DE: If you just play thrash, they’re with you forever. If you divert at all, man, it’s hard to get them back, because you lose their trust. I think with ‘Dystopia’ now, we’re there. We can now continue to make…we’re working on a new album. But we’re really taking our time with it. We’re not just jumping in to bang it out and jump back on the treadmill. You know, I think tonight was proof, people want to hear the old classic songs. You know, quite honestly, Megadeth couple probably not put an album out for five more years…

John: Dads bringing their sons is a big one.

DE: It is, it’s super cool, and moms bringing their daughters. Moms who grew up listening to Megadeth, it’s a multi-generational experience. We’re in our fourth decade, 35 years of Megadeth. I see it, the front row is our youngest fans, behind them is the next generation, the lower seats is the generation after that, and then in the upper seats are the die hards. The older ones that have been with us since the beginning, but don’t want to break their neck in the mosh pit.

John: (laughs) So how did you get into coffee? (Ellefson Coffee Company, ellefsoncoffeeco.com)

DE: Well, Dijon Carruthers, back when he was in the band in June of ‘83, we used to get together and drink coffee at his house all the time. More recently, I got into it as a business. About three years ago, I was introduced to Paul Waggoner, who is the guitar player in Between the Buried and Me, he and his wife have a coffee roasting business out of Charlotte, North Carolina. That’s how we invented ‘Roast in Peace’. He roasted them, and we came up with the names, me and my (business) partner Thom. We came up with the names, the images, logos and all this stuff. Now it has grown into a business, we have roasters all over the world, we are now a Rock and Roll coffee company.

John: So, Dave Mustaine has this persona out there, he is considered, let’s say, “Abrasive”. Do you ever get cornered by fans who ask what Mustaine is like?

DE: Oh, when I do clinics it’s usually one of the first questions that comes up…

DE: ‘Is Dave really difficult to deal with?’ ‘How’s it working with Dave Mustaine?’, because they want to know, and of course I’m the closest to him. I’ve been here the longest, I’ve been through all of the twists and turns of the road. And I always say…look, he’s a very uncompromising, unwavering guy. And not because he’s being an asshole because he just wants his way, he really does know what is best for Megadeth. Because I was there in the beginning, I met him when he had one song, ‘Megadeth’. And he had one lyric, and he was writing, ‘Looking down the cross’, and he started to write the next couple of tunes, and he was teaching this kid how to play bass, Matt Kisselstein, and then I came in and that really took it to another level. Then we decided to call the band, Megadeth. So to really be there when the vision was being cast, I really got a feel of who he…I mean, look, Dave is not for the faint of heart. He’s a fast-moving, thrill-seeking, dangerous kind of guy, and that’s what makes him so rock and roll. That’s what makes him such a champion of Megadeth, and of metal. In the same way, Lemmy. When you’re around Lemmy, and you know, ok, this guy ain’t fuckin’ around. It’s like being with a dangerous biker, you know, the Motorhead camp had that feel around it. It’s driven from the leader of the group. In that case, Lemmy. In our case, Dave. There’s some bands that you just don’t get that sense when you walk in the building, and Megadeth is definitely a band that you feel that. That comes from the top down, from Dave. It’s a cool thing to have. It defines the culture. Guns n’ Roses has it with Axl, you know. Not very many bands have it, and we’re one, and it’s pretty cool.