Reshaping Metal While Keeping The Traditions Alive, Philip H Anselmo Brings The Illegals Out To Play 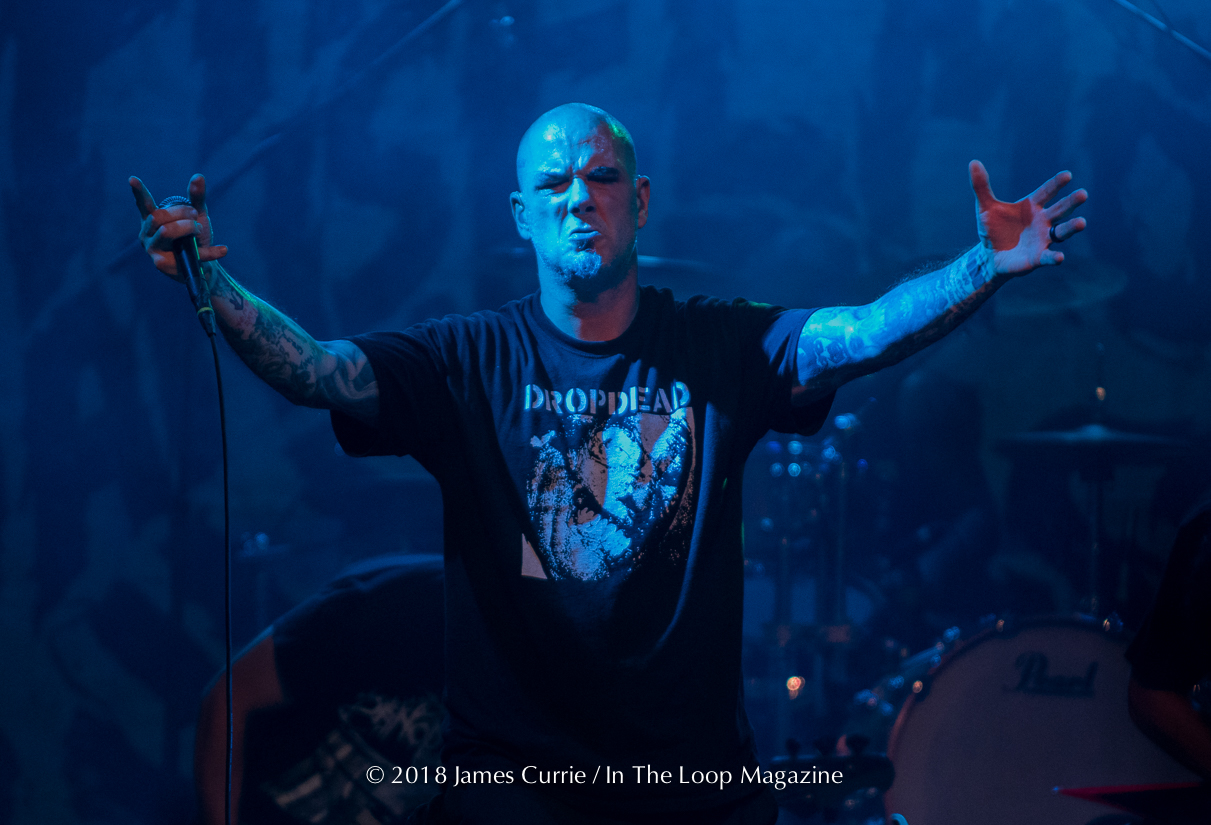 Philip H. Anselmo is a man on a mission. The bring the metal hammer down as often and hard as he can. Seriously, since Pantera, he’s been in numerous bands that have done really well. Bands that are true to metal music and it’s fans. Just in the past few years alone, he toured through town with Down, Superjoint Ritual, Scour and what appears to be his most involved recent venture, Philip H Anselmo and the Illegals. They have toured through Chicagoland a couple times already and are out again on tour of their most recent record release, Choosing Metal Illness As A Virtue, on his own label, Housecore Records.

On this night of the tour, the band played in Joliet Illinois at a club that has become synonymous with metal bands – The Forge. It’s a venue that’s been around for years, but gone through several name changes in as many. This version of the rock club has been around about a year and is promising to be the next great thing for the genre as so many great acts have already played here in it’s short time with even more on their way including, Ministry!

Tonights show was filled with metal acts. You definitely got your moneys worth. Starting at 7:30 with Chout, Comfort Scarcity, Reign and King Parrot before the Cowboy from Hell took stage with his band, Philip H Anselmo & The Illegals.

Besides King Parrot, Reign really stood out of these openers. They were all good, but Reign reminded me of Slayer. The energy, the vocals, the music style, the rage were all there. I even heard comment from another band standing to the side watching them say, “Damn! These guys are on it!”.

King Parrot took the stage right before The Illegals. Lead singer, Matt Young totally takes control of the stage. His presence was fierce. They marched around the stage like a gang ready to rumble. This grindcore band from Melbourne Australia came to kick ass- and that they did.

Now for the main event. This tour dubbed, “Choosing Metal Illness US Tour” with a subtitle of “If They’re Crazy, What Does That Make You”, is an ambitious tour that takes them from the south through the east coast and midwest. The Forge show is nearly the end of the tour with just a few dates left to finish out the month. On this date, Anselmo and Co. started the night with a one-two punch of “A New Level” and “Bedridden” before ending with something special that hasn’t happened before. Phil Anslemo and his band played the classic Pantera song, “I’m Broken”. Before it happened, Anselmo invited back out Young from King Parrot to help him do the song, followed closely by more Pantera tracks “Hellbound” and “Domination / Hallow”.

He talked to the crowd a saying, “This is something we just practiced once today. If it doesn’t work, we’ll blame the fucking drummer.” Then those infamous double notes on the guitar hit. As soon as they did, the crowd knew what it was and burst into cheer. Anselmo shared the dual vocals with Young. Bouncing back and forth off each line and each other. It was a great pairing.

Even though the band hard never played this live before, it was pretty good. Not perfect by any means, but that was OK because we were hearing the track live for the first time in over 15 years. To hear Anselmo screech out those lyrics, “I’m Broken!” was almost cathartic. This was coming from a man who has been battling demons for a long time since the falling out with his brothers in arms, trying to accept and deal with Dime Bag and now Vinny’s passing, dealing with physical pain for years, substance abuse and actions he taken in the past that have been taken out of context or wrong. “I’m Broken” must have a new meaning to him at this point. And he let us know.

Anselmo seemed to be so on point this night. He was completely with it. He was connecting to his fans. He ribbed with the band. He voice sounded the best it has in years with his body in just as good of shape. I’m not sure what happened in the past couple years, but Anselmo seems to have found what works for him physically and mentally. This is not the same broken man anymore.

The fans went absolutely bonkers at this show. Mosh pits circling. Crowd surfing. Screaming, yelling and singing along with songs, all just made for a welcoming night. Anselmo seems to be on a strong upswing. I hope it keeps rising and excited to see where it takes him.

Look, a Pantera reunion isn’t ever going to happen (for sadly obvious reasons). This is as close as it’s going to get. Barring Rex coming back to join him on stage again, hearing these songs live, with that voice makes your hair stand on end. It’s an absolute shame things could have worked out different, but I’ll take what I can get. Not only these classic Pantera songs, but killer new material from Anselmo that is taking him to new levels in music.

If you want to see Philip H Anselmo & The Illegals live, click here

Photo photos of the show at the Forge, click here