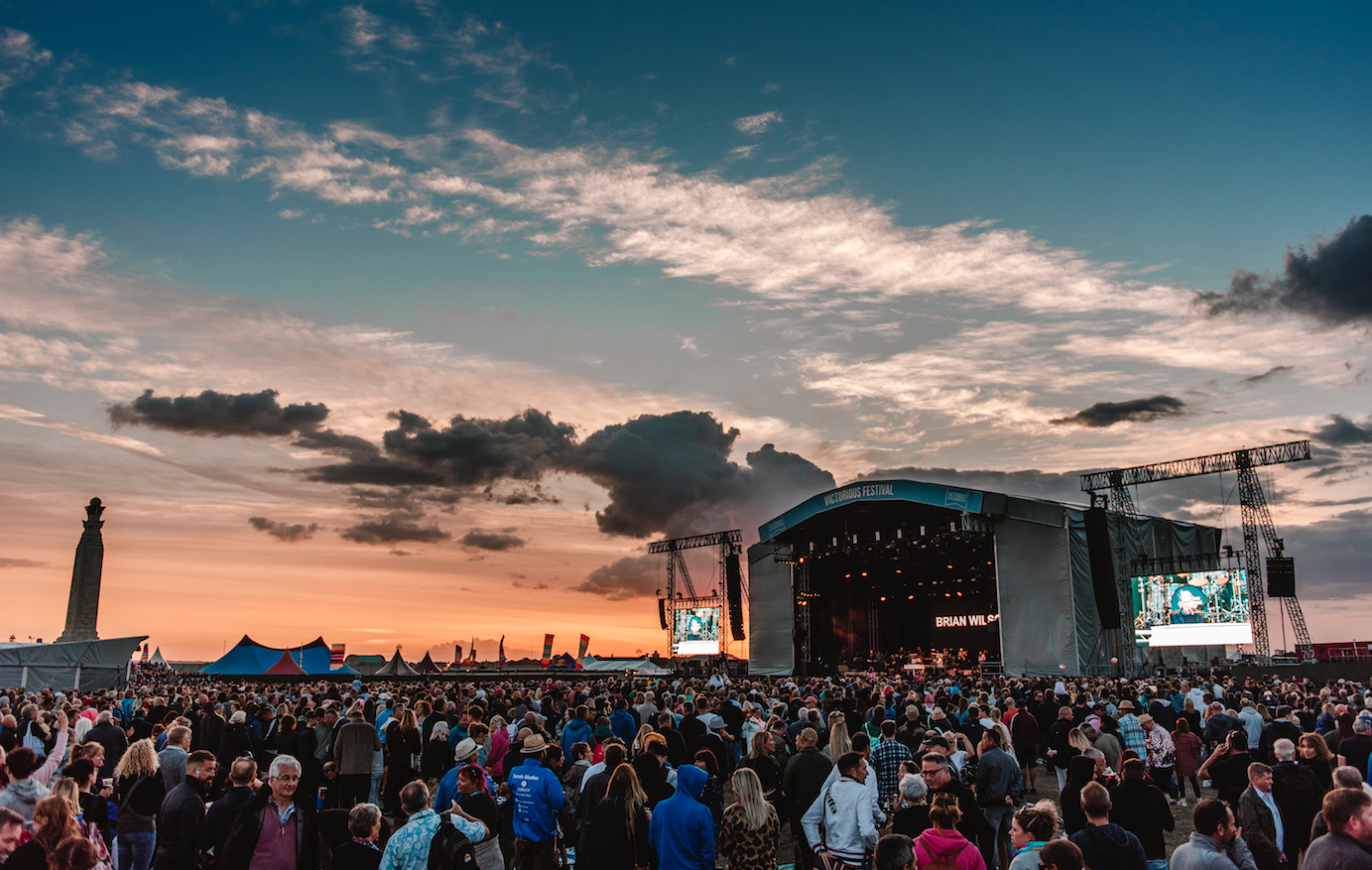 I’ve covered many music festivals in my 20 years of journalism. Most have been in Illinois. A hand full have been in California and a smidgen have been in New York. I’ve even covered one or two in Canada, but this time I’m going outside my borders, boundaries and comfort zone. After doing some research about amazing festivals in the UK, Victorious Festival popped up as being one of the best to hit up. So, it was off to London to cover music again this time as a foreigner entering the Brits festival environment.

This festival was very similar to most I’ve been too. I guess they have to be. I mean, they all have to plan for thousands of fans, multiple stages and food vendors but they also include posh sections for reserved fans who can afford to be out of the masses. Nothing out of the ordinary there, but what made this festival so different (besides the region) was the coastal location, the selection of bands, food choices and the people. Located about an hour and a half train ride south from London, it was centered on a beach front park. Oh and the weather was like everywhere, a mix of hot, cold and rain.

Let’s start with the main reason a festival like this happens- the bands. This three day festival on the southern coast of England was home to some heavy hitters in the music industry. Headlining the opening night was The Libertines. While they might not be a headliner in the U.S., they fit perfectly here as the fans went absolutely bonkers for them. Others performing on Friday were Kaiser Chiefs (who we’re familiar with in Chicago as they are a returning guest band at Lollapalooza), Shed Seven, Lightning Seeds (who had an alternative hit in the 90’s with an MTV 120 Minutes classic, “Sense”, AAA Badboy, Dutch Criminal Record, Monkey Love Stunt Team, Minque and Prince Brandon. Most of these I hadn’t heard of. That was my main thought when first seeing the lineup for Victorious Festival, but that’s one of the big attractions for me as I love discovering new music. Especially digging on what are local favorites.

Saturday was the highlight day for me. This day was filled with bands I loved for years. On this day, Paul Weller headlined and he dominated the main stage. While he only has a couple hits in the U.S., I had no idea his legacy status in the UK. They idolize this man. And for good reason. He rocks not only his solo work, but classics from his former bands like The Jam and The Style Council.

One of the other bands that peaked my attention this day was the “Madchester” group, The Happy Mondays. This was one of my favorite alternative rock bands to come out of the 90’s. What made this special is that this is a band that didn’t tour the States. And if they did, it was incredibly short. This was due to “issues” with the band getting Visas and traveling outside their homeland (i.e. drug convictions etc). So, some 25 years later, I’ve come to them. Bez dancing around on stage taunting the fans with his maracas keeping the energy going, the Ryder brothers, Shawn and Paul (not fighting) but belting out that Manchester sound they are known for, Rowetta holding down the backing vocals and the other members who made songs like “Step On”, “Hallelujah” and “Kinky Afro” indie alternative dance classics. They didn’t disappoint. There where so many fans there for them. And this was during the middle of the afternoon.

There was an American on the bill that really brought out the fans as well. Beach Boy, Brian Wilson, who we just covered recently in Chicago, came out and played his classic album, Pet Sounds, in its entirety. I will say, it was a little hard seeing Wilson perform. He’s sadly aged out of the game. I’m not sure why he is touring, but I hope it’s for himself and not some conglomerate forcing him to hit the road. Vocally, he sounded ok, but mentally seemed out of it. The music will live on, but the live experience may be over for this legend.

Another highlight of the day was seeing and hearing Gaz Coombes formerly of Supergrass. This guy knows how to put on a rock show. Decked out in a white jacket and fedora, Coombes took center stage and just whaled. His band is tight. The songs are fresh. I really loved Supergrass. I would liked to have heard more of those songs (we only got an acoustic version of “Moving”), but it was great to hear his voice again and see him on stage. I got a chance to talk to him backstage after his show and told him he was one of my highlights of this festival and that I hope he brings it to the States. He was very appreciative and said thanks. He went on to say that, “We are planning on hitting the States on this tour. Actually coming to Chicago soon!” His handler said, “Thanks for covering him, he’s doing incredibly well here in the U.K. let’s work on getting him just as big in the U.S.” I let them know that Supergrass as a definitely hit back home and I’m sure his solo work will do equally as well.

Other legacy acts included Billy Bragg and Neneh Cherry but beyond that, most bands were new to me. One of the newer stand out bands I didn’t know where The Cribs, Sleeper and The Pigeon Detectives. All had a new, fresh and active sound that I encourage everyone who doesn’t know them to find them.

Sunday rolled through and the headliner for this one was the industrial dance / electronic dance group The Prodigy. This band is still huge in the States. We covered them when they played in Chicago a couple years ago at Riot Fest and Lollapalooza. They actually seem to have a larger following today than when the Fire Starters first broke in the mid 90’s. Their appearance was an exclusive at Victorious Festival. Others that made an impact on the final day were, Years and Years, Friendly Fires, Gomez and the Dub Pistols.

A couple side notes about this festival worth noting, the location, the wears people sold and the food. The waterfront location was breathtaking. Right there on the southern tip end of England, across from the iconic Isle of Wight. The Atlantic ocean glistening at the end of each day. The cool breeze blowing in off the waters.

The old fort stationed at one end that was the backdrop to a stage. The sprawling park land. All of these made the location special. Like nothing I’ve seen before.

There were rows and rows of vendors selling everything from flower crowns to bins full of candy. Others went with a more traditional music festival approach and had vinyl records, clothing and artwork.

The food was a big surprise to see (and smell) It was so different than food vendors in the States. Unlike Chicago festivals filled with pizza, beef sandwiches, turkey legs and corn dogs, this festival was filled with lots of fish and chips, pies, sausages and curry’s. A refreshing change indeed. Note to any future fest goers: bring cash as most vendors only accept it for payment.

In the time I spent on the south-sea seafront, I heard a lot. I learned a lot and it gave me a new insight to what music festivals are like across the pond. I learned that music is still universal. People will come out in droves for good bands. Styles and genres may be regional, but that’s a good thing. You get to experience things you may not otherwise check out. The Victorious Festival is doing it right. They are building on these factors that make a fest unique and attractive. This is one that I hope to make it back to some day. If you are in the area during the end of August, I highly recommend checking it out. You won’t be disappointed.

For pictures of the festival, people, foods and side entertainment, click here