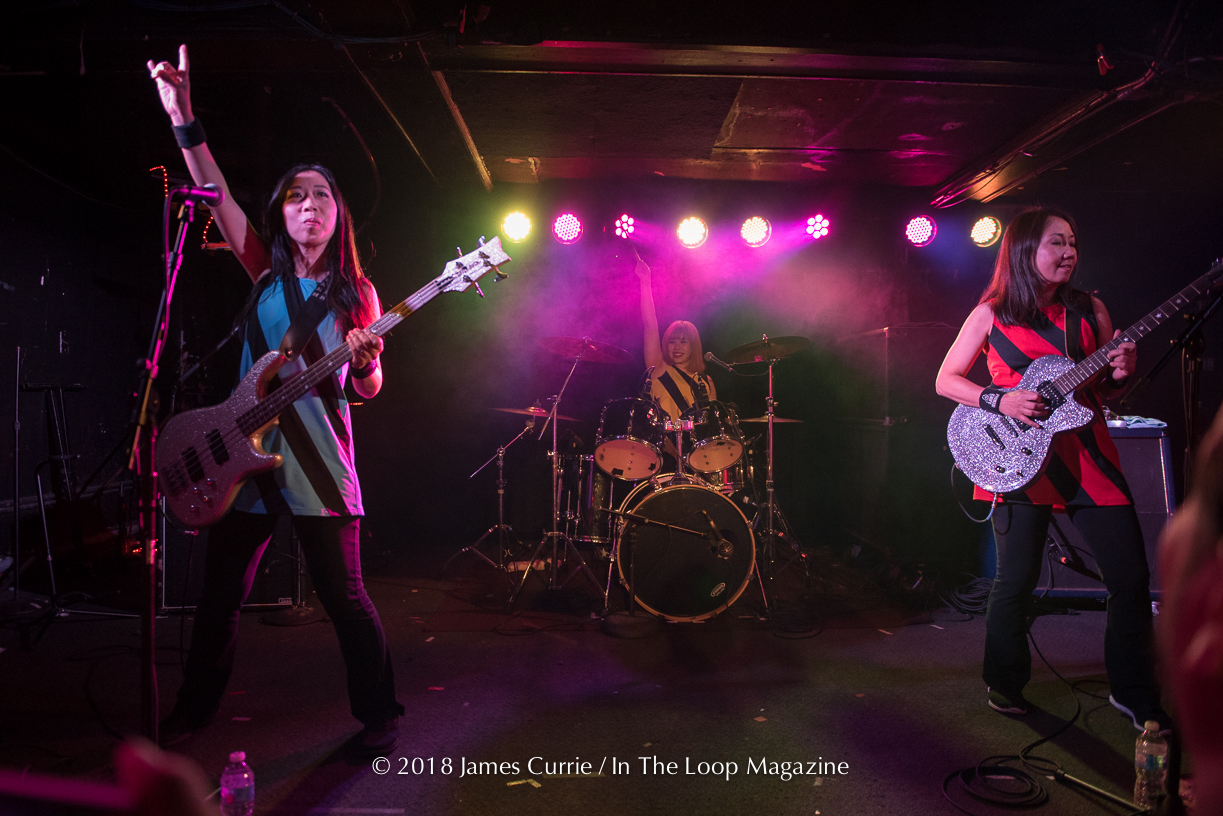 Pop punk legends Shonen Knife have been going at it for 37 years. They sing songs about useful items, songs about food, songs about sports and/or exercise. With over 20 albums in their catalogue, they have amassed a loyal cult following that includes the likes of Cobain and Moore.

Shonen Knife, now comprised of founding member Naoko (lead guitar and lead vocals), Atsuko (bass and vocals), and Risa (drums and vocals) stopped by Subterranean in support of their new live album, ALIVE! in Osaka, complete with wristbands, smiles, and outfits designed by Atsuko. They started things off with “Jump into the New World”, and did not stop until every head in the venue was head bobbing and grinning ear to ear. Playing for over an hour, their song selection spanned mid-tempo rockers (a cover of Nick Lowe’s ‘Cruel to Be Kind’) to hi-energy foot stompers (‘Cobra Versus Mongoose’).

While Naoko sings the majority of the songs, they all took turns at the microphone. Behind her smiles and pounding drums, Risa sang ‘Green Tangerine’ and ‘Cycling is Fun’, while Atsuko sang about their love of ice cream (‘Ice Cream City’) and what it’s like to be a cat (‘I am a Cat’). Atsuko took to the mic to proclaim that while they had sushi that day, they love Chicago pizza and Chicago hot dogs.

Whenever a band like Shonen Knife comes to town, it always feels like there is a question that hangs in the air. That question is, “when will the old punk rockers freak out and start slam dancing into everyone?”. The answer was about halfway into the set.

Somewhere in the middle of ‘Jet Shot’, a song about Naoko’s hobby of tennis, a small group in the center of the floor went from smiling and bopping their head side-to-side, to elbows flailing everywhere. It was like the good-times punky riffs finally boiled over and there was dancing to be had. I personally never thought I would be slam dancing/ defending myself to a song about tasty banana chips, but I was proven wrong. All in good fun, no injuries to report.

Throughout their career, Shonen Knife has been all about the DIY ethic. Atsuko designed their outfits, each member wearing a solid color three-quarter length sleeveless dress (one red, one yellow, one blue), each with thick diagonal black stripes across them. For each show they decorate a clear drum head that is sold at the merch table.

For the encore, the band disappeared up the spiral staircase at the back of the stage, and came back wearing Shonen Knife T-Shirts over their outfits. Naoko commented on how she drew one of the designs of their shirts, then appropriately went into ‘Rock and Roll T-shirt’. They ended the night with the hi-energy ‘Buttercup (I’m a Super Girl)’, a song about The PowerPuff Girls.

37 years in, this band shows no signs of ever slowing down. They’re as fun as ever and during their entire set, the smiles on Naoko’s, Atsuko’s, and Risa’s faces did not fade.

Neither did the crowd’s. Arigato, Shonen Knife. Arigato.

Shonen Knife @ Subterranean Bringing Their Sonic Psychedelia To Chicago, My Bloody Valentine Throw Riviera Fans Into A Swirl Of Emotions