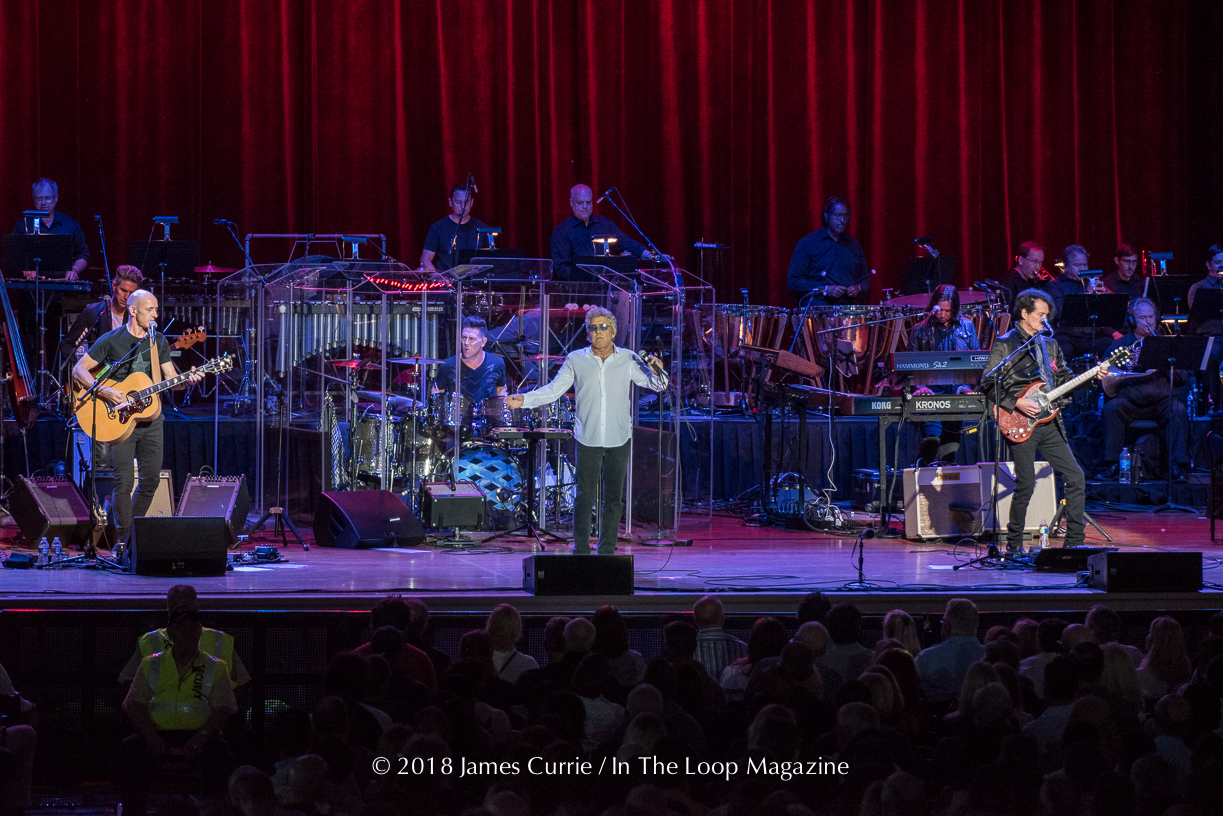 It’s mind-blowing to think about how many times Roger Daltrey (74) has sung the Pinball Wizard classics in the last half a century. How can he possibly still enjoy performing the Brain Opera legends that have graced vinyl, stage and screen for over five decades. Well, he’s found another way to not only keep them alive, but to make them entertaining and memorable for not only himself, but the masses that came out to his holiday camp in the woods of the Ravinia Music Festival under the stars.

In an interview earlier in the year with Rolling Stone, Daltrey stated “I’m really looking forward to singing Tommy, not only with my great backing group, but also some of the finest orchestras in the country”. This weekend, those sounds came out loud and clear as he played with the Ravinia Orchestra in Highland Park just north of Chicago. The stage was completely packed with musicians from all around giving the fullest sound of this performance I’ve ever heard.

On stage during the first of a two night residency, Daltrey told the audience, “In all these years, I’ve never performed these songs quite like this.” He went on to say that it’s been a real treat to do it. So what exactly did we get to witness? Well, possibly the greatest live presentation of the soundtrack ever performed since its incarnation in the studio in 1968.

I’ve seen The Who and Roger Daltrey play live several times in the past couple decades. Daltrey and Townsend have played their masterpiece, along with the hits and wowed crowds each time. They are always the consummate professionals, but this time, sadly sans Pete, the sounds are fuller, more robust and have to be presented the way they were meant to be heard, with a full orchestra behind the rock band.

This rock opera was begging to be presented this way. I’m honestly surprised it took this long to happen. Yes, we heard Daltrey play Tommy live with a rock band before, but never with a full orchestra and arranged this way. The show started promptly at 8PM. The Ravinia Orchestra flanked both sides of sprawling stage. Daltrey’s band this time consisting of Simon Townshend (Pete’s brother) on guitar and backup vocals, Frank Simes on guitars, Loren Gold on keyboards, Jon Button holding down the bottom end on bass and drummer Scott Devour, took center stage. Townsend kicked off the show with the open track “Overture” and “It’s a Boy“, then Daltrey entered the stage and took command for the rest of the night. They played through all 24 tracks with all the hits like, “The Acid Queen“, “Pinball Wizard” and “We’re Not Gonna Take It“.

Daltrey may not have the thick, lush curls on his head he once donned to play Tommy, but he does still have a voice that belts out these iconic tracks. Somehow, he seemingly hasn’t lost his range or power. He still commands the stage. He still whips the mic around like Indiana Jones and that’s what really matters. He still is one of Rock’s greatest frontmen of all time even at a time of his life when most are long into enjoying retirement.

The audience was a slightly reserved at Ravinia, as to be expected, but they did come alive during the well known tracks, the end of the opus and the hits. There was one woman who stood out during the show though. A middle aged mom who let her freak flag fly. She was one of the only fans I saw standing for the concert most of the time. She danced, she sang along with all the lyrics and she didn’t give two shits who saw her in action. Even her family and or friends next to her let her go through this Amazing Journey un touched. She pointed at the stage and shouted out loud, Daltrey Can You Hear Me? She was a joy to watch and made the performance that much more special. I only hope Roger noticed as well.

This is part of a small tour Daltrey is doing. He’s only going out for a month and only playing 13 dates and with each town he plays in, he recruits his backing orchestra. If he’s coming through your town, this is one no Who / Tommy fan should miss. Who knows when and if this will ever happen again. This truly was the best way to hear Tommy performed live. It just brought the music to a whole new level. Entwistle and Moon would have been proud. I only wish Pete could have joined together with the band.

For more info on Roger Daltrey and this current Tommy tour, click here