You Wanted The Best, You Got The Best – The Hottest Band In The World…KI – Er, Gene Simmons Band 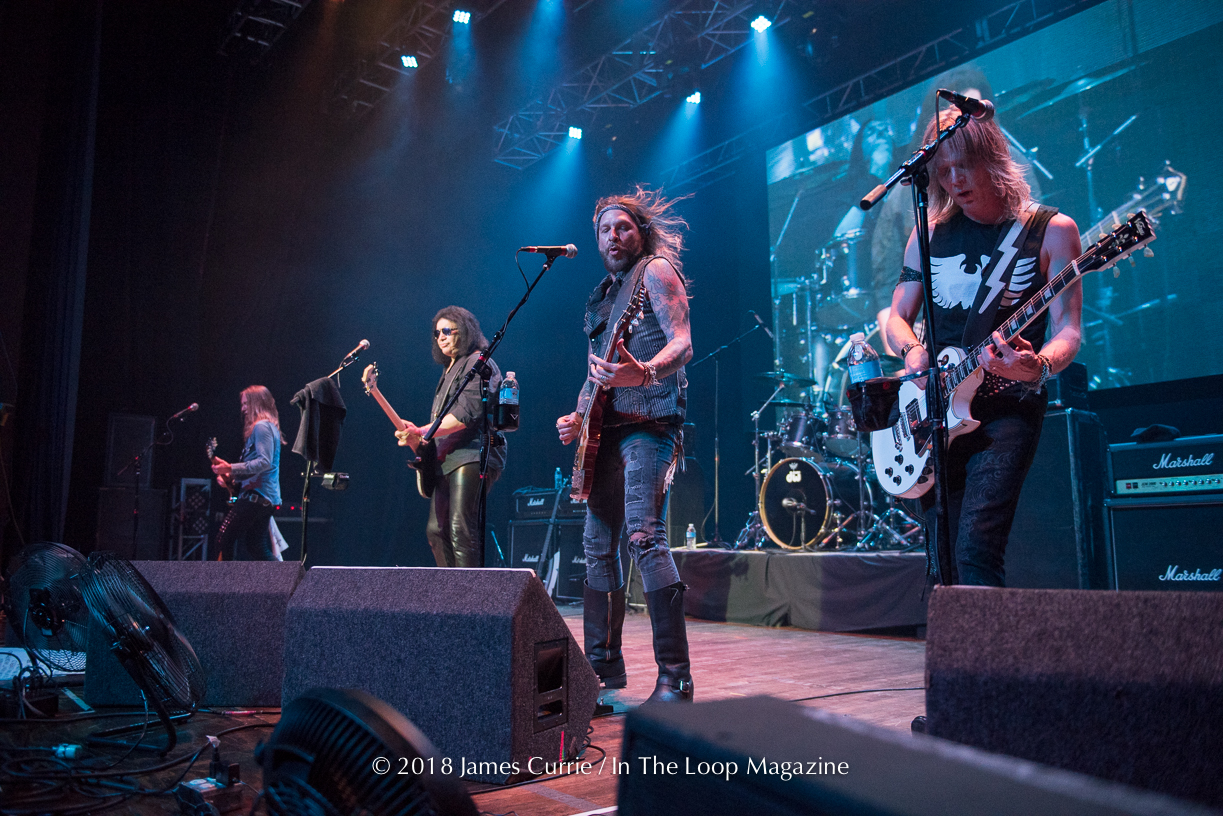 Well, not entirely, but damn close. Yes, it’s true—the Demon, the God of Thunder himself—Gene Simmons, backed by a four piece band that would easily rival any of the classic ‘80s rock bands on their own, landed at the Arcada Theatre on Thursday, delivering a well-rounded set that explored classic KISS tracks along with an abundance of deep cuts to a room filled with members of the KISS Army.

Simmons has been touring a solo project for a while now during KISS’ off-season, and while it would be easy to phone in a set that mirrors that of a KISS show, he’s taken a different route, which is both refreshing and honestly endearing. Ever the showman, he spent the night both cracking wise and rocking out in equal measure, his love for performance clearly on display, while soliciting help from the audience on several occasions.

A horde of women flanked the band for a singalong version of “I Love it Loud,” while a horde of men, some of whom sported Demon makeup and bat wings in solidarity, gathered on the stage for “Do You Love Me.” While the party atmosphere was a lot of fun, for serious KISS fans, the setlist held some rarely-heard treasures. “A World Without Heroes,” one of the standouts of the night and a single from KISS’ underrated 1981 concept piece The Elder, was as bombastic as it was atmospheric, and the raucous “I” from the same record was nearly as rousing, from a melodic standpoint, as classics like “Shout it Out Loud” and “Deuce.” (And let’s face it, for the diehards, any opportunity to get something from The Elder is not to be taken for granted.) “It’s My Life,” a Stanley/Simmons tune that, to date, has only surfaced as a bonus track on a long out-of-print boxed set, is a criminally underrated piece of KISStory, and, let’s be honest, most of us never thought we’d get to hear “Sweet Pain” or “Charisma” live.

It’s a common but mistaken assumption that when a megastar like Simmons takes on a solo project, the backing band will be a bunch of hired guns who aren’t really unique or special in their own right. But Simmons’ band are a force to be reckoned with, taking on the additional vocals and offering the energy of any hungry young rock band. Guitarists Ryan Cook, Jeremy Asbrock, and Phil Shouse (of Nashville’s Rock N’ Roll Residency), along with drummer Brent Fitz, kept the crowd riled even during the moments when Simmons took a step back to let them do their thing, culminating in a stomping rendition of “Long Tall Sally” that had the black-clad frontman beaming with joy. Say what you want about KISS; watching one of the two key figures in that group enjoy himself so much in a small theater said everything about how much he truly enjoys what he does – the energy was infectious and will undoubtedly carry fans until the next KISS tour. For the time being, it was a rare pleasure to see Simmons without costumes, without makeup, without the glam rock trappings, throwing his own rock n’ roll party.

For photos from the show at the Arcada, click here