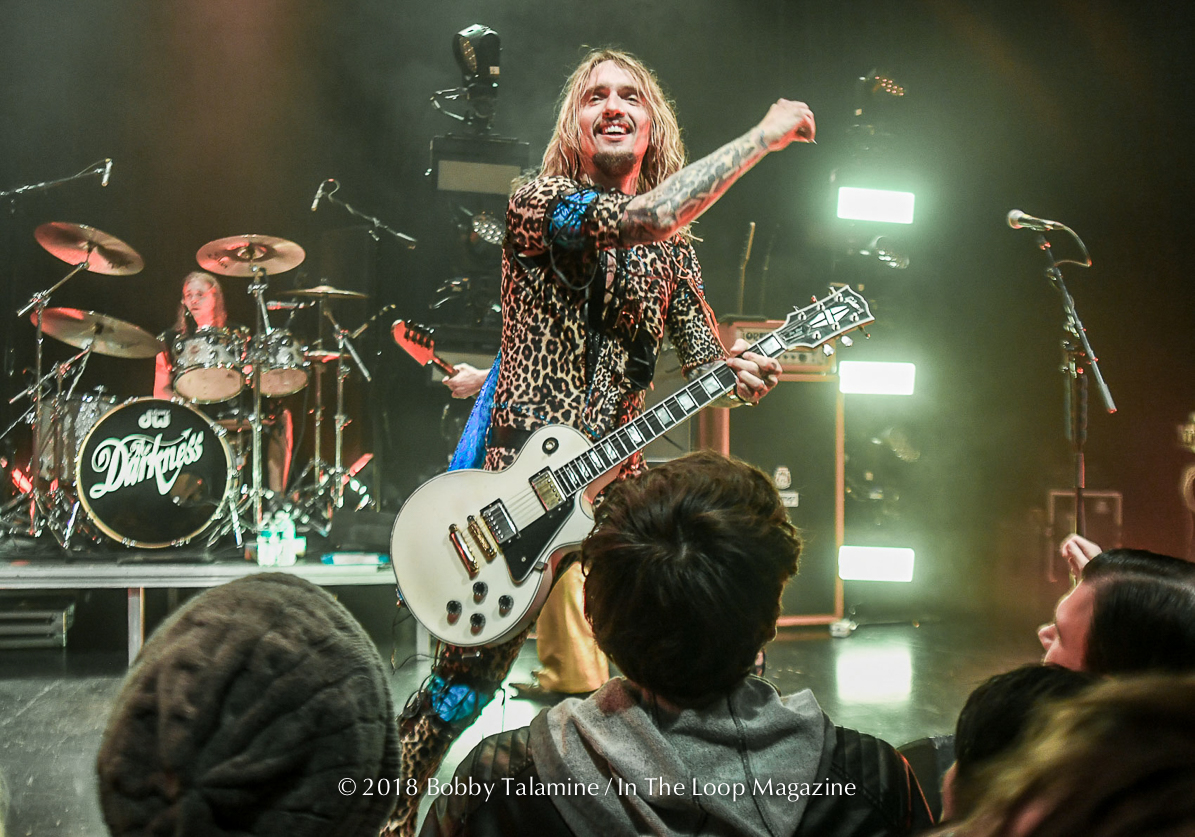 The Darkness. A band filled to the brim with infectious tracks, infectious rhythms, infectious hooks and melodies in spades, and a complete grasp on how to command and interact with an audience from the beginning of a show ’till the end.

A lot of that is owed to their frontman Justin Hawkins, who- clad in a leopard jumpsuit tighter than god knows what- a guy who should have the word “Rockstar” tattooed to his chest with all his other tattoos…simply and justly – an electrified times ten performer who never quits, and loves to rock. His brother Dan Hawkins is quite the accomplished guitarist in his own right.

All through the show, he reminds me a lot of Malcom Young from AC /DC- only not stuck back by the dozens of Marshall Amps. A more up front kind of guy, that’s for sure- but with Malcom’s intense attitude in keeping the ship afloat amidst all the surrounding chaos. And of course you’ve their tight rhythm section consisting of Mr. Low end himself- Bassist Frankie Poullain, who- with all that afro hair and Gold Suit looks like he’s that drug dealer on the corner of whatever from circa 1972. And lastly their badass drummer Rufus Tiger Taylor- bashing all things drums without breaking a serious sweat.

All of this comes to the front and center by defining what an infectious rock band should look and sound like in the dictionary to define Rock n’ Roll, which of course for this genre of Rock – is sorely missed, with scant airplay, and going mostly on past glories and constant word of mouth. These guys make for a great live band, reminding you that they’re not discouraged, that they are happy to play to a party of 60 people as equal to large festivals and bigger halls.

With The Darkness, rock isn’t dead. It’s alive and kicking, and screaming, and yelling to the rafters to let go and join the party.

Diarrhea Planet opened the show- with blazing guitars and over the top and on the brink of disaster showmanship. Love this band in their own right- a fierce party band who blaze through their sets with nary a chance to catch a breath. All n’ all- a fun show of showmanship from beginning to end.

Setlist: The Darkness live in Chicago at Park West April 2018

16: Japanese Prisoner of Love
17: I Believe in a Thing Called Love
18: Love On The Rocks With No Ice

The Darkness @ Park West Judas Priest @ The Venue at Horseshoe Casino (Hammond, IN)