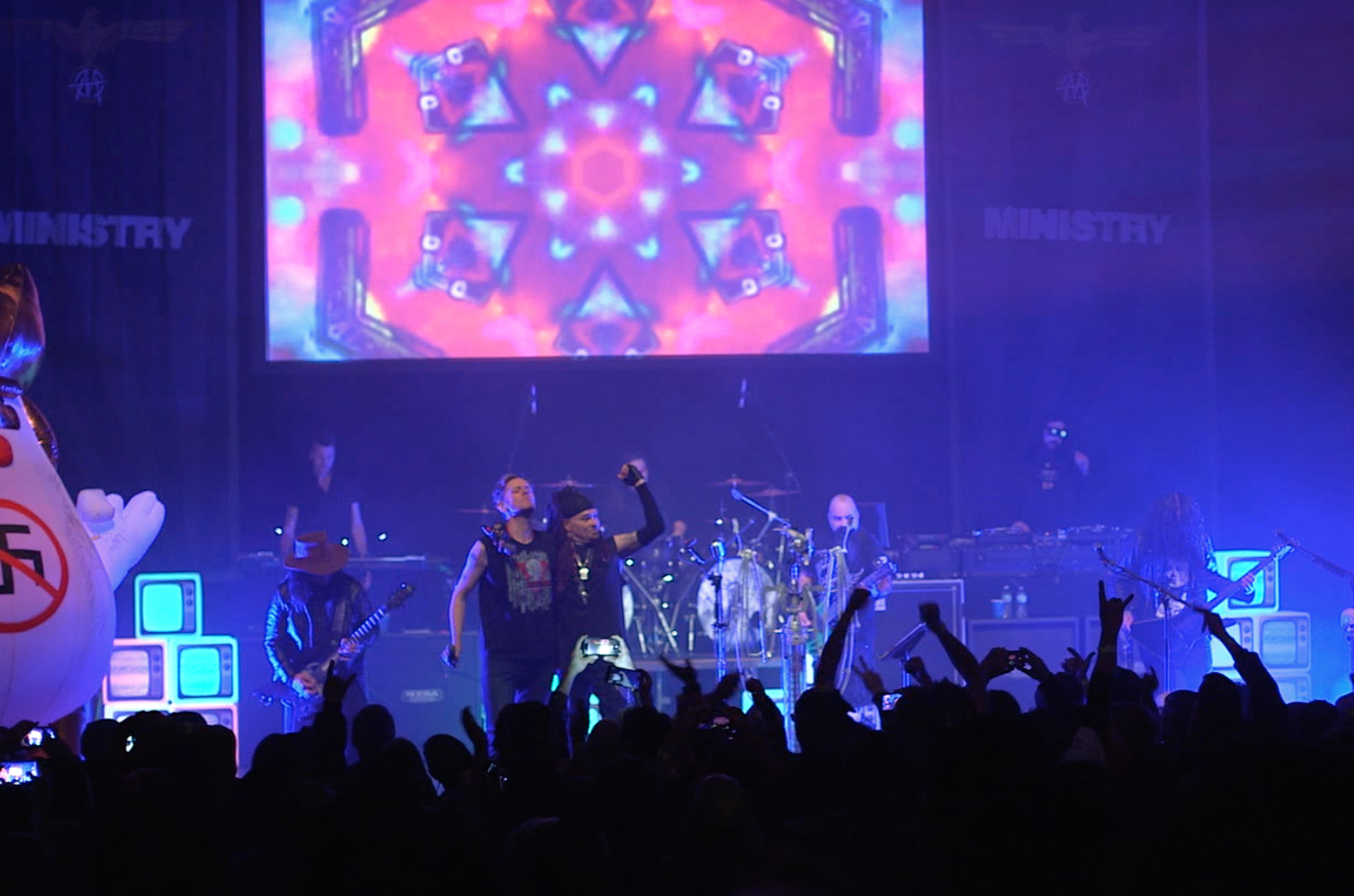 Ministry – Live at the Riviera Theatre

The Riviera Theatre played host to a homecoming party of industrial proportions to the Chicago-raised undisputed godfather of industrial metal music itself, Al Jourgensen — and his infamous Ministry. Al and company wasted no time in making their primary statement of intent, flying out of the gate with the first three tracks off their latest full-length album, AmeriKKKant, which will hardly leave you wondering how Uncle Al really feels about the orange man in the White House.

A couple drinks and a few spirited conversations after supporting indie-sludge metal act Chelsea Wolfe left the stage, the house music faded, the lights dimmed, and an eerie mélange of dystopian Trump soundbites scratched by DJ Swamp and triggered by keyboardist John Bechdel filled the theatre with an unsettling calm before a politically-fueled sonic barrage, which included a stretch of material that dates back to Houses of the Molé (when George W. Bush was the Republican antagonist of the day).

The stage itself was eclectically adorned with glowing color-changing TV cubes and vocal mic stands decked out in winged creature skeletons with human skulls, while two giant inflatable Donald Trump-lookalike chickens — bearing crossed-out Swastikas on their chests — loomed large on both sides of the stage throughout Ministry’s set. These weren’t the only cocks to join Ministry onstage Saturday night, but more on that later…

An old friend and colleague of Al’s, heavy-hitting vocalist Burton C. Bell of Fear Factory, was introduced onstage to rip through “Victims of a Clown,” “We’re Tired of It,” and “Wargasm,” all of which feature his guest vocals on the new record. Wearing a black shirt that reads “Police the Police” in plain white lettering, boasting a stage presence that directly encourages crowd participation, Bell helped to fully involve the audience into the show early on.

Guitarists Sin Quirin and Cesar Soto blazed through a blistering slew of thrashy riffs (e.g. “Señor Peligro” and “Lies, Lies, Lies”) with a heavy edge that cut through a sample-heavy mix like a hot knife through butter. A rhythm section featuring Tony Campos on bass and Derek Abrams on drums was steadfast, brutal and decidedly thunderous.

From crude oil barons and war mongers to corrupt authoritarian politicians and religion-indoctrinated bigots, no enemies of peace were spared throughout the duration of the set. A performance of “Antifa,” an unapologetic piece from the perspective of the nihilistic-leaning rebel who’s done playing nice when it comes to “dealing with assholes,” demonstrated the theme of the night — with Antifa “red and black” flag wavers pacing the stage to boot.

The second half of the set saw Ministry turn back the clock to their late 80’s and 90’s classics, starting with the more-than-just-toe-tapping “Just One Fix,” followed by hits “N.W.O.” and “Thieves.” A large backdrop display switched between pre-produced visuals and camera feeds (Al and audience), which further excited an already enthusiastic crowd. Then, what followed was arguably the most noteworthy event of the night in terms of the Ministry story as a whole.

Al called another “old friend” to the stage, and a tall, lanky Scottish vocalist named Chris Connelly exuberantly strutted into view, marking the first musical collaboration of the long-estranged pair since Revolting Cocks’ 1993 release of Linger Ficken’ Good… and Other Barnyard Oddities. Together, the Revolting Cocks and Ministry ex-bandmates performed an especially boisterous rendition of a 1989 fan-favorite, “So What,” launching the hometown fan base into a feel-good nostalgic frenzy, before the band exited the stage.

After a brief reprieve, the band took the stage again for a first encore of Dark Side of the Spoon’s dark and catchy “Bad Blood,” and a second encore of the soul-haunting title track of platinum-certified 1992 album Psalm 69, which was a first for this North American run. In quintessential Ministry fashion, the hometown band treated their following to more than a few surprising twists and turns — and welcome ones at that.

Click here for more on Ministry, the current tour and newest release Amerikkkant

Setlist: Ministry live in Chicago at The Riviera Theatre April 7, 2018

Ministry @ The Riviera Theatre In The Loop Magazine Video Exclusive! Ministry, Live At The Riv Performing, "So What" With Special Guest, Chris Connelly