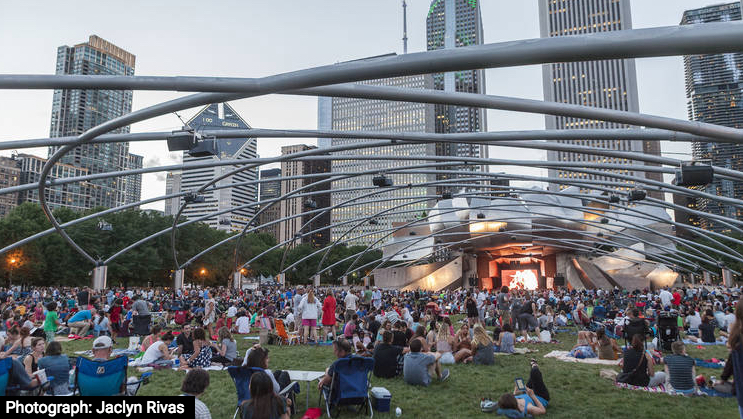 The 2018 Millennium Park Summer Music Series will offer an exciting lineup of FREE outdoor concerts on 10 dates between June 18 and August 16 (specific dates noted below) at the Jay Pritzker Pavilion in Millennium Park. The music series features a wide variety of genre-defying music from top local, national and international artists—both established and emerging. For complete details, visit millenniumpark.org.

All concerts are FREE and open to the public and performances begin at 6:30 p.m. and take place rain or shine.

This is the Kit (Folk Singer-songwriter)

The Sea and Cake (Indie Rock)

**Schedule of Performers is Subject to Change**

As the summer season kicks off in Millennium Park, some important changes are coming to improve security and the visitor experience at the park. The City of Chicago will implement a security perimeter and bag check for all concerts and events that take place in Millennium Park. Outside alcohol will be prohibited at the seven Jay Pritzker Pavilion events with the highest attendance; however, food and other beverages are still permitted: May 26: Chicago House Music Festival; June 8–10: Chicago Blues Festival; June 24: Chicago Mariachi Festival; July 4: Grant Park Music Festival Independence Day Salute; August 9: Wait, Wait Don’t Tell Me; August 13: Broadway in Chicago Summer Concert and August 29–September 2: Chicago Jazz Festival. Outside food and beverage, including alcohol, will be permitted at the MP Music Series and among over 70 public concerts and programs happening in Millennium Park this summer.

The Millennium Park Music Series is produced by the Department of Cultural Affairs and Special events and sponsored by the Chicago Transit Authority, Southwest Airlines and 93XRT. Refreshments are available for purchase from Goose Island Beer Company, Riboli Family Wines and Pepsi at various locations throughout the park. For the latest news and events, download the Millennium Park app, visit millenniumpark.org, and follow us on Facebook (MillenniumParkChicago), Twitter, Instagram (@Millennium_Park  #MillenniumPark) and Snapchat (ChicagoDCASE).

Opened in 2004, Millennium Park is a 24.5-acre urban park in the heart of downtown Chicago, home to the iconic Cloud Gate sculpture (also known as “The Bean”) by Anish Kapoor, Crown Fountain designed by Jaume Plensa, the Frank Gehry-designed Jay Pritzker Pavilion, Lurie Garden and more. Millennium Park is Chicago’s town square and the anchor of an urban cultural campus that includes the Chicago Cultural Center, Maggie Daley Park and the Art Institute of Chicago—all connected by the Chicago Cultural Mile. Millennium Park is located on Michigan Avenue, bordered by Randolph St. to the north, Columbus Dr. to the east and Monroe St. to the south. The Park is open 6am–11pm daily. For the latest news and events, download the Millennium Park app, visit millenniumpark.org, like us on Facebook and follow us on Twitter and Instagram, @Millennium_Park.

The Department of Cultural Affairs and Special Events is dedicated to enriching Chicago’s artistic vitality and cultural vibrancy. This includes fostering the development of Chicago’s non-profit arts sector, independent working artists and for-profit arts businesses; providing a framework to guide the City’s future cultural and economic growth, via the 2012 Chicago Cultural Plan; marketing the City’s cultural assets to a worldwide audience; and presenting high-quality, free and affordable cultural programs for residents and visitors.