The Return of Marilyn Manson To Chicago After Fall Cancellation, Brings Sold Out Show To Riviera Theatre 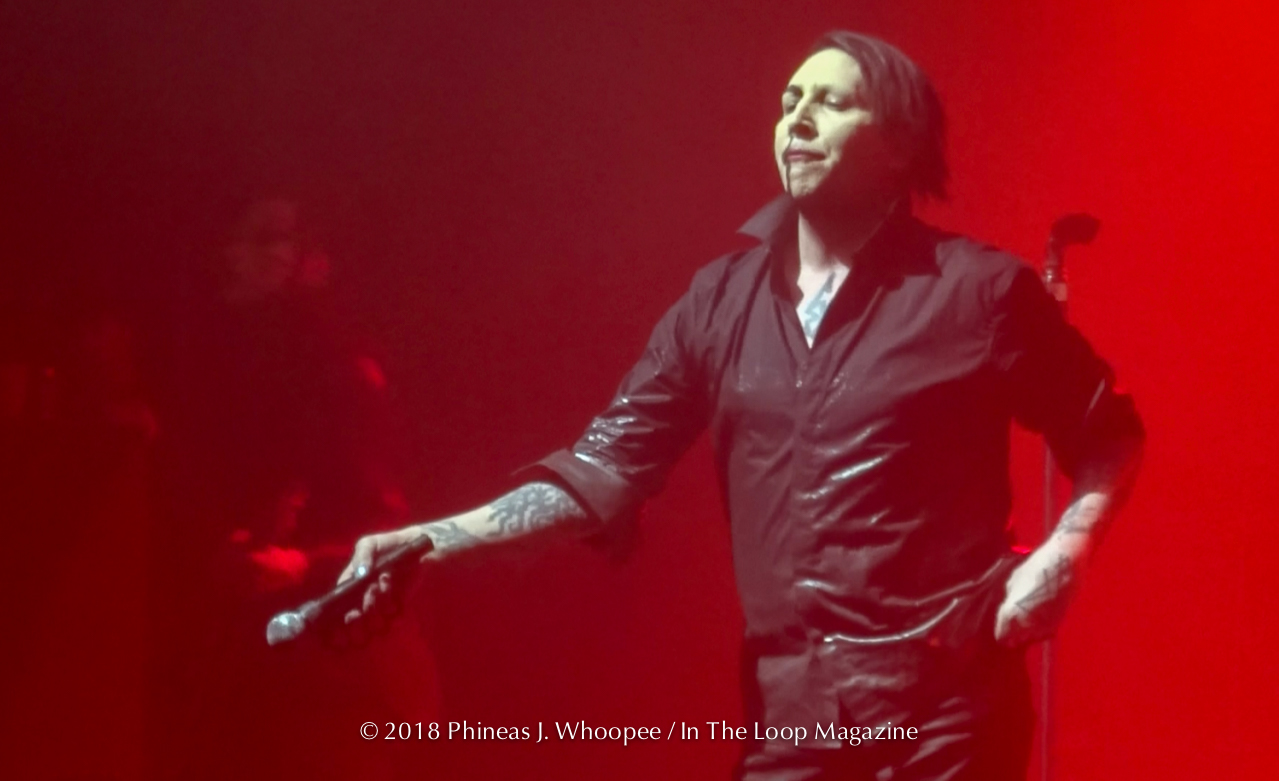 About halfway through his show at the Riviera Theatre on Tuesday night, Marilyn Manson asked a question.

“I know you guys are all in love with me,” he said through a wall of red-lit fog. “But would you kill for me?” As the band launched into the tightly-wrapped bass groove of “Kill4Me” from Manson’s savage new album Heaven Upside Down, the capacity crowd bounced along, with more than a few members of the audience shouting affirmatives.

Sporting a boot on the leg that was injured several months back at the start of the tour, the self-proclaimed Antichrist Superstar was perhaps less mobile than usual, though the means by which the injury was integrated into the show actually worked well. A motorized wheelchair doubled as a gothic-looking throne, while surgical assistants joined Manson onstage between songs to light his cigarette and hold his gurney steady during a surprisingly refreshing take on “Sweet Dreams.” Strutting around the stage in a black-feathered cape during “The Dope Show,” casually dragging and puffing smoke, something a friend of mine said about Manson a couple of years ago occurred to me. It was immediately following the release of 2015’s The Pale Emperor, an album that saw Manson get a little more bluesy, and the best way my friend could think of to describe the sound of the album was that it was on par with earlier Manson records, but somehow “classier.” It was true; watching Manson engage the crowd and own the stage without a lot of fancy theatrics was, in a way, a classier version of the creature that strode into America’s living rooms in 1996 proclaiming that his new album (the acclaimed Antichrist Superstar) would bring about the apocalypse and usher in the death of religion.

Which is not to say that Manson’s presence or songs were any less impactful. In some cases, the tone of the impact has changed, particularly during moments like “The Nobodies” from 2001’s criminally-underrated Holy Wood, which explored the horror of school shootings, and even to tongue-in-cheek rock-star anthems like the “The Dope Show.” A line like ‘there’s lots of pretty ones who want to get you high’ rings a little differently in a country plagued by opioid addiction, and while social commentary has always been a big part of Manson’s particular brand of evil, the ominousness of the themes at work at each step of his career – whether you buy into the image or not – has always been real and continues to resonate, judging from the crowd that didn’t let up for a minute.

If anything was missing, it might have been that socio-political angle. After all, the theme of Holy Wood was a country obsessed with guns, violence, and religious self-importance, all themes that have reached a tipping point in 2018, so deeper cuts like “Burning Flag” and even Emperor’s “Killing Strangers” would have been welcome additions to the set. But Manson has always moved against the tide to say what others won’t, so to that end, straightforward protest in a culture where our days are riddled with them might not have been the answer. Perhaps now is the best time for someone like Manson to get a bit personal with his themes, something that’s certainly been reflected in his last two records, and that focus on the personal came across live in understated ways. A bluesy version of “Lunchbox” gave way to new track “Saturnalia,” which was as unexpected as it was welcome. And while the older hits kept the crowd amped, the intensity of new tracks like “Revelation #12” and “Say10” certainly suggested that moving forward was the order of the night.

In the early ‘90s, it would have been tough to say whether or not Marilyn Manson would weather the storms of popular culture, political movements, and simple shifts in taste to see a career that’s lasted over 25 years. (Hell, in many ways, it’s a miracle he survived.) But any artists worth their salt adapt, and the best ones do it naturally. Some of them even do it with a touch of—dare I say—class. Thankfully, the ‘God of Fuck’ is no exception.