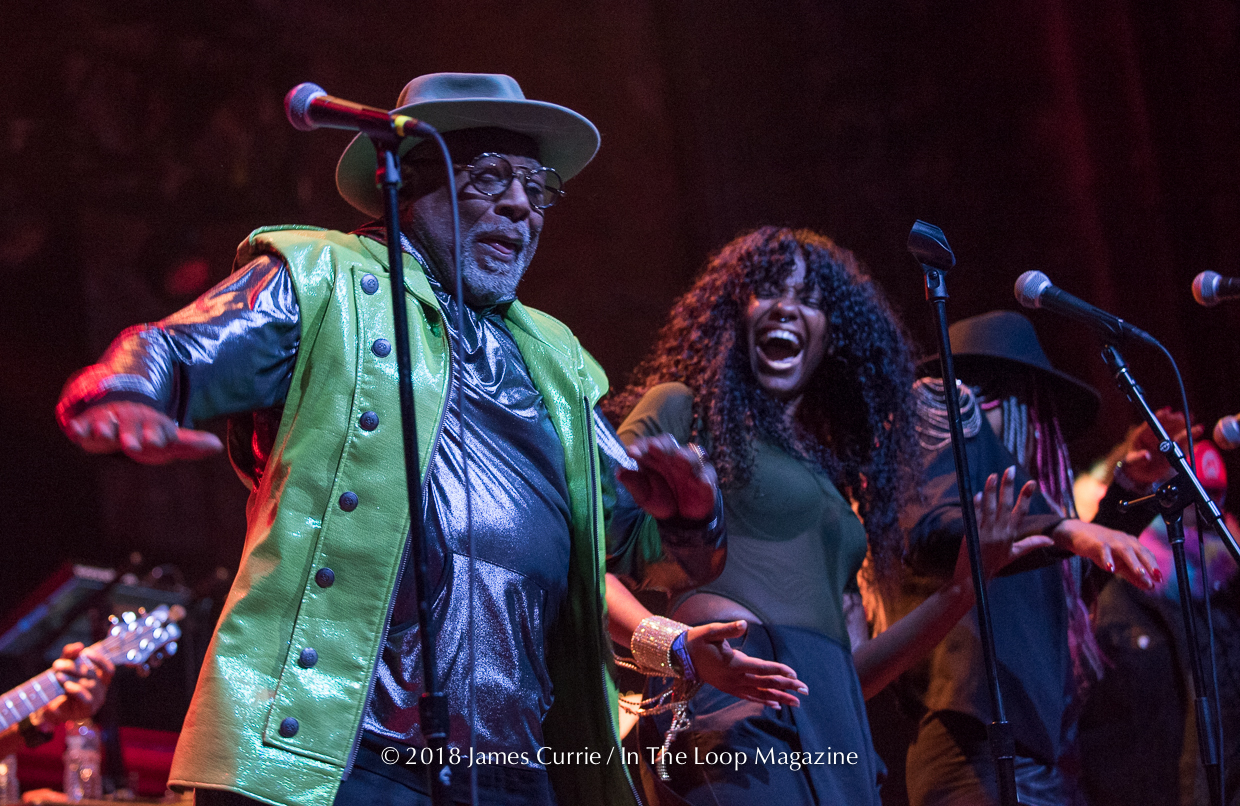 Dr. Funkenstein has resurrected the Parliament-Funkadelic once again. This time, the decibel-pounding beast that is P-Funk, is hitting the road on the Mardi Gras Madness tour for 2018. George Clinton has gathered up the crew and brought them out for another ruckus adventure this time starting in Chicago at Pilsen’s Thalia Hall.

Tonight’s show was again, sold out. It seems the Atomic Dog has found the right formula for Chi-Town. Fan’s here have been selling out his tours for the last couple years. They started lining up just before 6PM to get in for the exclusive VIP access meet and greet. Once they worked there way up the vintage clubs rear staircase, they entered a side room to meet the Godfather of Funk himself.

One extremely passionate and engaged fan came dressed to impress well, if you were a, “So You Think You Can Dance” judge anyway. The 40 something man came prepared to get down. Literally. He sported shin guards, elbow pads and an entire outfit to get the funk out in during the rehearsals (and beyond).

For the rest of us mere mortals, we just stood back and waited for the Mothership Connection to take us for a ride.

Tonight was the opening night of the tour. This is something that for any band, can either be a warm up rehearsal for the rest of the tour, or something magical. Tonight was the latter. The lights went down. The band started the intro. Clinton bolted out like a caged lion let loose. This was something fresh to see, as in the past, the band would warm up the crowd for a song or two before the man with the plan takes center stage. Not this night.

George Clinton and Parliament Funkadelic literally rocked the house. This was one of the fiercest performances I’ve seen from the band. They were fresh. Eager to get on stage and jam before the fans. It was magical. Clinton was active and aggressive. He took front and center from the start. He commanded the band and the stage throughout the night and invited the audience to go along for this funky ride through Chocolate City.

They played over two and a half hours of hits from all Clintons projects including the newly released single, “I’m Gon Make U Sick O’ Me” from the upcoming Parliament album Medicaid Fraud Dog, (first new Parliament album in almost 38 years).

The band played out the night and the fans still couldn’t get enough as they cheered for more ever after the multi-houred show leaving little doubt this town is a funk town. One that will clearly welcome the band back next year if history repeats itself. Just make sure you watch out for early announcements so you don’t miss it.

It’s truly amazing to see this man out there doing what he does. Clinton, no spring chicken at 76, has just as much energy and passion as any middle-aged rock band around. He’s been bringing the funk since the late 1960’s. From what we saw tonight, it doesn’t appear age will be a factor in stopping this party from going on and on.

To catch the band on the rest of the tour, click here