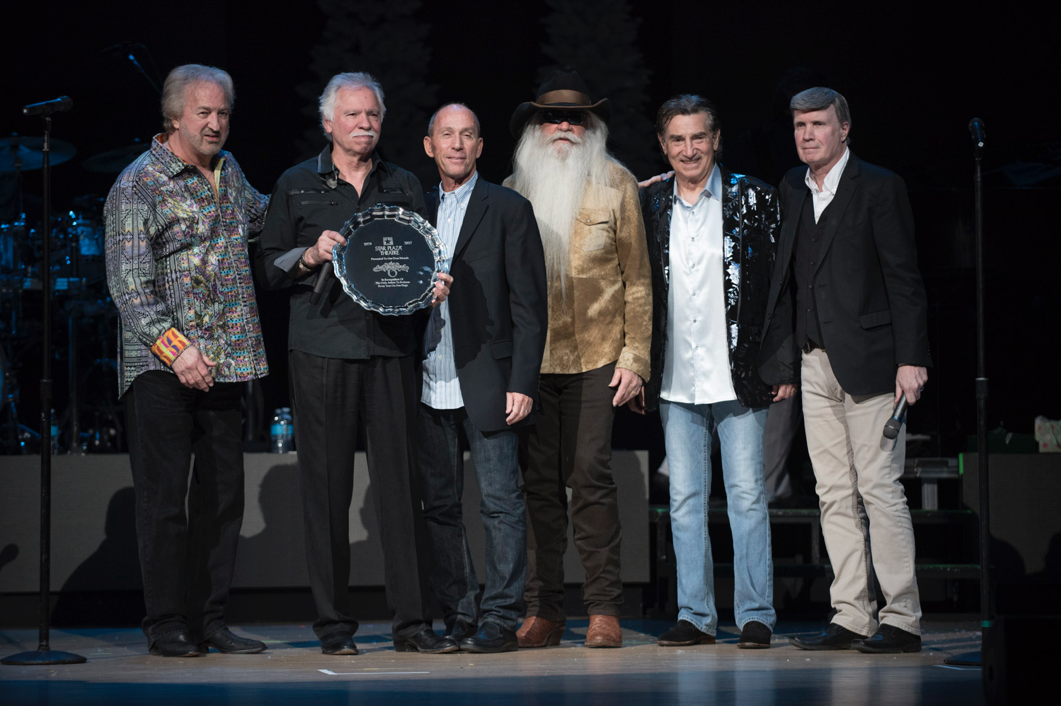 Watching the Oak Ridge Boys play the final performance at the Star Plaza Theatre in Merrillville, Indiana is the end of a 38 year long tradition at this theatre.  The Oak Ridge Boys have played there every year since 1979 when the theatre opened, for a total of 111 shows that ended this evening with Auld Lang Syne and Amazing Grace.

My huband and I have visited the Star Plaza many times over the years, seeing everyone from Keith Urban, The Monkees with Weird Al Yankovic and Barry Williams, to Sawyer Brown with Lee Greenwood.  This 3,400 seat venue was a lovely place to see great acts, in an intimate setting, not far from Chicago. It’s sad to see it go.

There is a lot of history built up in these walls. Even a Beatle has played there. Ringo Starr even has a display case with memorabilia in it that includes a signed drum head, drum stick, photo and more. He’s in good company as so many others are on display throughout the venue like Alice Cooper, The Temptations and of course, The Oak Ridge Boys.

There wasn’t a dry eye in the house during the ending. Even The Oak Ridge Boys caught a sniffle or two talking about their history with the place and the family who has own and ran it through those multi decades. The audience was filled with former employees, fans of the band and family of the theatre. Signs were passed to the stage and audience banter between the fans and the band discussed things like, how many times have you seen The Oak Ridge Boys and how many concerts have you attended here? One woman, dressed as Mrs. Clause approached the stage and told the band she had been to every one of the Christmas shows since the beginning. Some fans even left gifts on the stage for the band during the show like cookies and small presents thanking the band for their many years of support and giving great shows in the small theatre they call their own.

It’s not fully clear why The Star Plaza Theatre is closing and being torn down. We asked a few employees in the halls and heard things like the place was aging and needed lots a repairs to the property value was too great and a deal was made to sell it all off for a nice profit. Another longtime security guard said they have worked their for many years and the White family who owns it are great people and really treat employees right. She will be sad to go, but is OK with the decision to close it down.

Construction has already began in the area. The hotel next door is gone and the lots are being torn up. Tonight, December 17, 2017 is the final show ever at The Star Plaza Theatre. There will be no more. When the stage lights went out tonight, it was for the last time. The curtain has been drawn and the gates closed.

For more on The Oak Ridge Boys, click here

For photos from The Oak Ridge Boys show at the Star Plaza Theatre, click here