A Perfect Circle, A Perfect Concert, Just Don’t Break The Bands Perfect Rule. After More Than A Half Decade Away, The Band Returns With New Show And Strict Policy 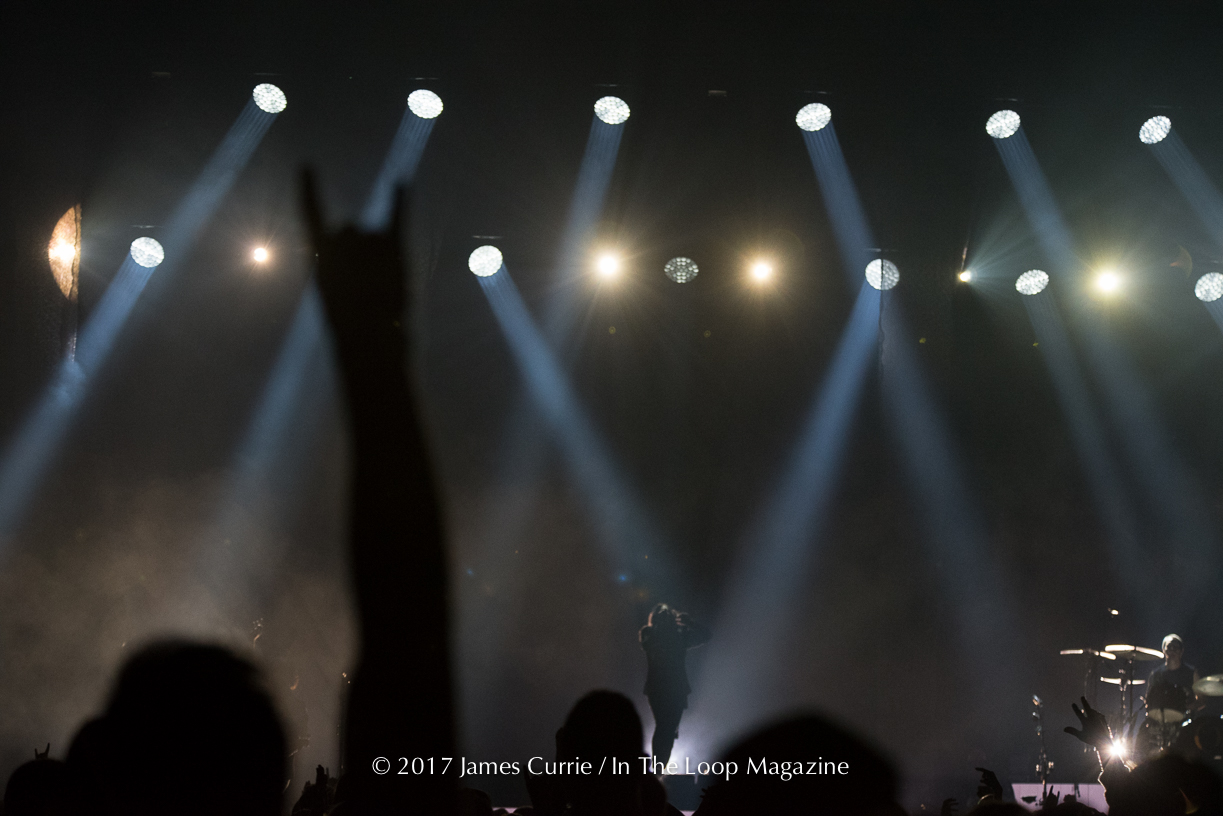 A Perfect Circle has been long overdue for coming back to Chicago. The last time I saw them in town was at Lollapalooza in 2011. The concert at UIC Pavilion on Friday night was definitely worth the wait.

Many would think that A Perfect Circle is another great band that Maynard James Keenan started. Yes, Maynard plays a big part of the band just like the other fine musicians, but the band began in Billy Howerdel’s creative mind. Billy rose through the ranks in the music industry working for smaller bands and gradually progressed to touring bands Fishbone, Nine Inch Nails, Guns N’ Roses and Tool. While he was working as a guitar tech, he was cultivating his own music. Billy first met Maynard when Tool opened for Fishbone and a friendship developed into them becoming roommates. Maynard heard Billy’s music back in 1996 and Maynard wanted to sing on it. They have been collaborating and coming up with awesome songs ever since then.

Over the years, A Perfect Circle has had many different band members. Currently, joining Billy Howerdel (lead guitar, backing vocals) and Maynard (lead vocals) on stage are James Iha (rhythm guitar, keyboards), Matt McJunkins (bass, backing vocals) and Jeff Friedl (drums). They have been interweaving their sounds together since 2011.

Walking into the venue, signs were plastered all over informing the crowd that absolutely no photos or videos would be allowed during the show. If someone did not comply with the request, they could be ejected from the building. I love the fact that the band is strict about people not using their cell phones during the show. I find living in the moment during a concert is more enjoyable than watching it over again on a small screen. It is definitely rude to have cameras up in the air, in front of people’s faces, recording a song or the whole concert. Leave it up to the professional photographers to capture snapshots of the show.

Not only was the night filled with excitement of the band’s return, but also the talk that has been all over social media about a new album in the possible near future. Listening to their latest offering “The Doomed” for a month now, got me enthusiastic to hear it live.

They started their set playing “The Package” with their silhouettes being lit behind a giant shear cloth that hung down from the lighting rigs to the stage. The crowd roared as the cloth dropped as the song kicked into its first heavy part with Maynard’s vocals “Give this to me”. Maynard had his standard position at the back of the stage with Jeff and James flanked to each side of him and Matt and Billy positioned in the front of the stage.

The dramatic lighting effects gave another great element to each song of the night pulling the crowd further into the music. When Billy and Matt were not standing in place, they were moving around the stage interacting with the crowd. Behind this interaction Maynard, wearing a wig with long hair, made his distinct forward and backward movements on his riser.

With the political turmoil that is going on in the world, Maynard interjected his thoughts on the subject and also said they are “Merchants of Emotion”. The covers of “Imagine” and “People Are People” sounded great as they were interlaced into the 19-song setlist. Maynard having some fun with us said he figured out a way to stay in shape during the grueling tour schedule. He incorporated using two Shake Weights during the song “Thinking of You”.

Just as I anticipated, it was great to hear “Doomed” played live. They definitely made sure the song sounded perfect and would be another song that stands the test of time. We were also treated to two other new songs, “Hourglass” and “Feathers” that easily won over the crowd from the sound of the cheers after each song.

After they performed the song “3 Libras” Maynard announced that there will be a new album! The crowd exploded with cheers and whistles to the news. We were relieved to know that there would be more new songs around the corner. I hope with all the other projects and commitments each band member has outside of A Perfect Circle that they can quickly fit in a tour to support the new album.

To my surprise at the end of the show, Maynard came to the front of the stage to thank the crowd and give the peace sign. The rest of the band thanked the crowd in their own way as Billy got down on his knees and bowed to the crowd. The band was very humble as we thanked them by our applause and hollering.

We left extremely happy getting our fill of great music for the night. Since the three new songs sounded great can only mean that the rest of the new album is going to be just as incredible!

For photos of A Perfect Circle live in Chicago at UIC Pavilion, click here

For photos of The Beta Machine live in Chicago at UIC Pavilion, click here

The Beta Machine @ UIC Pavilion John McLaughlin & Jimmy Herring: A Meeting of the Spirits @ The Riviera