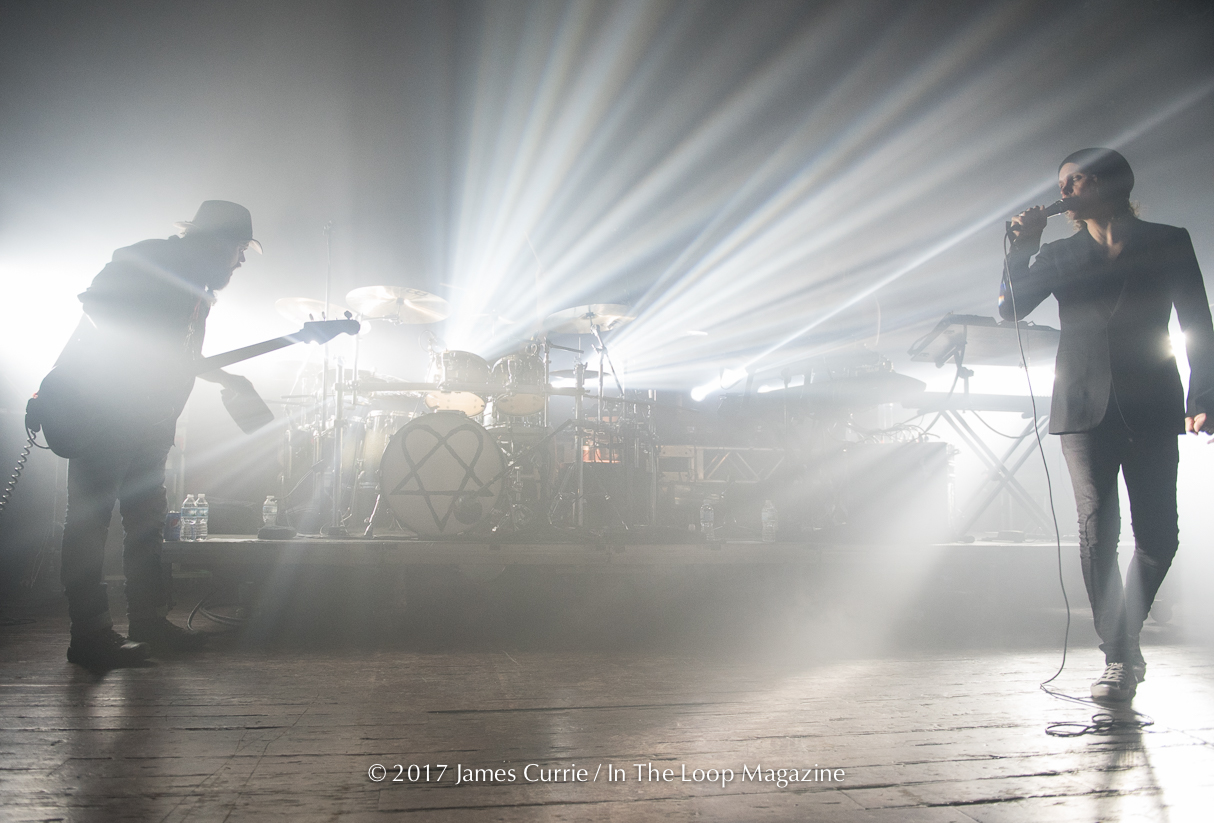 It’s not everyday when a longtime name decides to turn in the towel and call it a day. After touring and writing albums for many, many years, since 1991 to be exact, Finnish metallers/rockers, HIM played a sold-out House of Blues in Chicago. The show was one of their final stops on the Bang & Whimper 2017 – The Farewell Tour. Special guests CKY were also on the bill in support of HIM. The night was met with energy and emotion as everyone in the sold-out House of Blues knew the inevitable was coming that all good things must come to an end eventually.

As CKY and HIM have a history together, it was appropriate that the Pennsylvania area rockers be on the bill. Fans seemed pretty stoked as their energy was radiant once the curtain lifted and CKY kicked off the night with a familiar hit, Rio Bravo. The Human Drive in HiFi, Flesh Into Gear and Replaceable continued the next set of tracks. Lead man Chad Ginsburg really got the crowd pumped up and spoke to the masses in between songs. Eventually, Chad mentioned, “Hey does anyone here know CKY? Aren’t they the band that has a song that sounds like, ‘duh duh dun dun…’,” making reference to their most famous song, 96 Quite Bitter Beings. Of course the crowd got riled up but it wasn’t long before CKY ended things with the tracks Close Yet Far and Escape From Hellview. Other tracks in their setlist included Frenetic Amnesic, Attached at the Hip and Head for a Breakdown.

The crowds did not let up, it was an insanely packed venue throughout the night as fans were ready to experience, one final time, the glory from Finland known as HIM. A bit about the band, they formed in 1991 under the full name, His Infernal Majesty. Throughout their career, they toured the world several times, released 8 full-length studio albums, have been nominated and won various awards, became the first Finnish act to receive a gold record in the US and have sold millions of albums worldwide. Their lyrics tend to revolve around love, romance, relationships, darkness, and gothic themes/elements. Their heartagram logo is a fusion of a an upside down star or pentagram and a heart, taking meaning around the yin and yang of males and females while also representing the band’s softer side and their heavier influences. It has been sort of a tradition among fans and even celebrities to permanently tattoo the iconic heartagram on themselves. Overall, they are without a doubt one of the most successful acts to come out of Finland.

The band had announced earlier this year that they felt the time was right to officially call it quits and retire but not before one final tour. Tickets at the House of Blues sold out almost instantly upon the release of such news when tickets went on sale. As it wasn’t packed already, fans pushed their way to the front as HIM graced the stage and kicked things off with their energy-driven track, Buried Alive By Love. The band tore it up on stage with such fierce energy, it was mesmerizing to see the band give back to the fans in such a way. Heartache Every Moment, Your Sweet 666 and Kiss Of Dawn continued their setlist. Throughout the night, the band rarely took any time to talk, rather they played track after track after track. At one point lead man Ville Valo apologized and mentioned, “Sorry for us not talking so much. It has to do from where we’re from but our feelings show through the power of our music.”

Time was not wasted as The Sacrament, Tears On Tape, Wings of A Butterfly, Gone With The Sin, Soul On Fire and Wicked Game pushed on through the band’s long and memorable setlist. All tracks played that night were singles the band has released over the years, it almost felt like the crowd was experiencing the full HIM history as tracks were played from their early days as well as their more modern era. Eventually, the fans got a generous taste of some explosive shredding talents by Mr. Mikko “Linde” Lindstrom as his solo at the end of Wicked Game went well over a minute in playtime. Fans were in awe and clapped tremendously as the insane talents of guitar mastermind, Linde.

As many of HIM’s hits include introd piano pieces, crowds recognized instantly hits like Killing Loneliness and Join Me In Death. At one point, bra’s were landing on the stage which made for an interesting part of the night. Regardless, as Ville mentioned about their lack of banter in between songs, the band trekked through the remainder of the setlist which included Poison Girl, Bleed Well, Heartkiller, It’s All Tears, In Joy & Sorrow, Right Here In My Arms and the final track of the night, or so people thought, Funeral Of Hearts. The stage went dark, fans were still left wanting more and started chanting, “One more song! One more song!” Before long, the band showed up on stage again to play a few encores tracks before the inevitable would soon happen. One of the band’s earlier hits, Razorblade Kiss served as the band’s final official song of the night but to end things on a more energetic note, a cover of Billy Idol’s, Rebel Yell, ended the night. I think it’s safe to say that ending on a cover, a positive and badass cover at that, would protect the buzz generated that night as fans knew of course that the curtain call was coming.

No emotional goodbyes, no cliche antics, the band went out in style and waved goodbye to the fans before leaving the stage. By the end of the night, there were some fans that were in deep emotion as some couldn’t help but cry that it was the end of the night officially. It was hard to accept it but we all did have to at some point. A longtime name in the world of metal, HIM certainly made an impact upon the metal industry and it is without a doubt no other act sounds like them. They are truly an act in their own league now and forever. Thank you HIM.

For photos from CKY at House of Blues Chicago, click here

For more on HIM, including the final dates of the farewell tour, click here

For photos from HIM at House of Blues Chicago, click here