Sold Out Halloween Show: Lords of Acid, Live At Bottom Lounge in Chicago 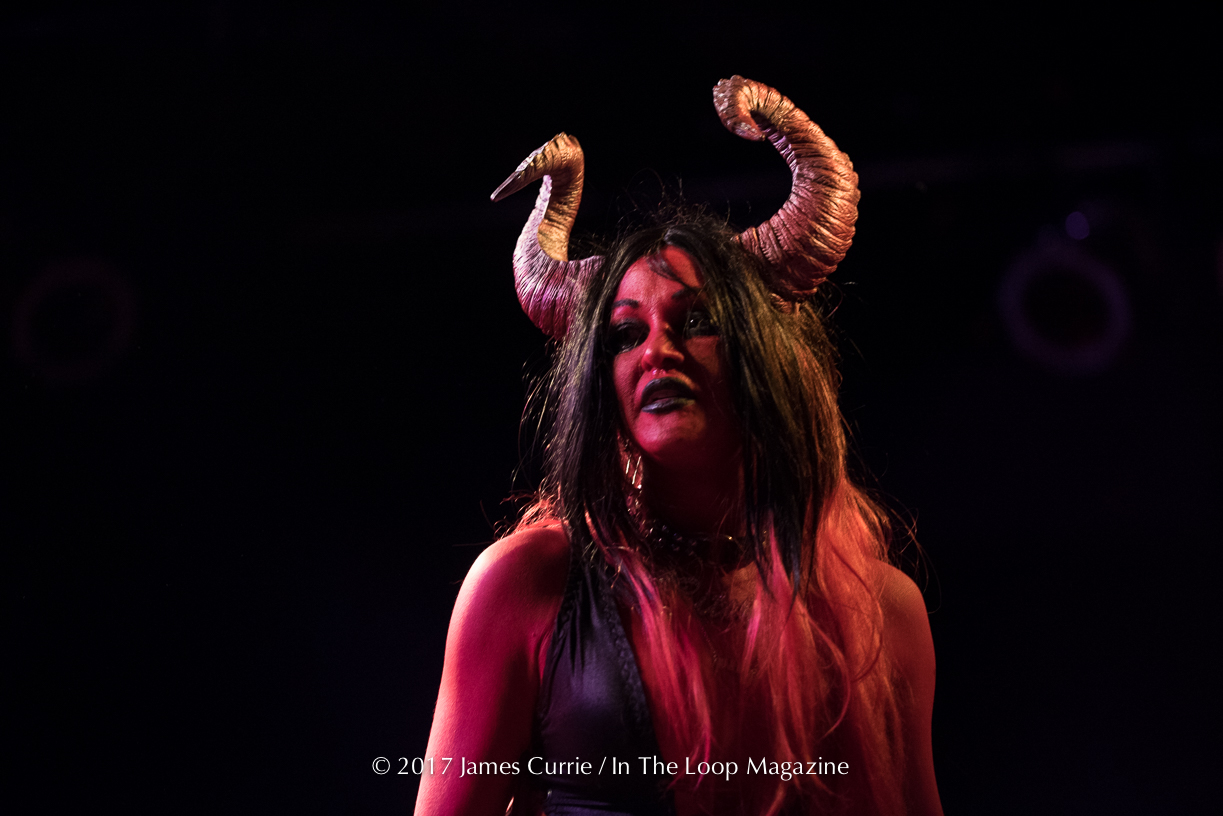 Feel the rhythm, feel the soul, the Lords of Acid took control of the sold out crowd on Halloween night at The Bottom Lounge. The weather outside was one of the coldest Halloweens in years, but the intensity inside the venue was one of the hottest I have experienced. Not only was the music exceptional, so were many of the costumes that people wore.

I was first introduced to Lords of Acid by a friend back in college in 1995 and never had the chance to see them until now. I was excited to see that Praga Khan (synthesizers, programming and backing vocals), the only original member, was bringing the group to Chicago on this tour. Joining Praga on stage were Mea Fisher (a.k.a. DJ Mea) (lead vocals), Galen Waling (drums), DieTrich Thrall (bass), Joe Haze (guitar), Erica Dilanjian (backing vocals) and Roland Turner (keyboard, backing vocals).

They opened their set with ‘Voodoo-U’ and got some of the crowd quickly jumping up and down as the band moved on stage. Keeping the tempo and the crowd moving they kicked into the song ‘Young Boys’. Mea was very grateful to Praga for letting her perform her new song ‘Devil Inside’. The song fit nicely into the setlist and En Esch; who also was a part of KMFDM, Pigface and Slick Idiot to name a few, came onto the stage to sing. This was the first time ‘Devil Inside’ was performed live.

The crowd intensified during ‘Drink My Honey’ and the band continued into ‘Mister Machoman’. The crowd followed Mea and Erica waving their hands from side-to-side in the air. The majority of the Lords of Acid’s are filled with sexual and raunchy lyrics, which is another reason why the Acid Heads have shown their love to the band for over 25 years. Lords of Acid enjoy giving a great performance and do not take themselves too seriously.

A blowup doll was thrown into the crowd during ‘Rubber Doll’, which got tossed around throughout the crowd during the song. Keeping the party going, the band called up the girls in the crowd to come up for ‘Pussy’ a fan favorite. Everyone was singing along and having a great time and did not want the night to end.

To begin their encore the band started off with ‘The Most Wonderful Girl’. Mea, in her devil costume, finally found the right time to crowd surf. The intense beats kept the crowd going as they screamed for more. The band closed out the night with ‘I Sit On Acid’, which I would have to say one of their biggest hits. Over the years of listening to Lords of Acid, I was glad to finally see them live and to see the legend Praga jump around showing his love for his craft. I will definitely go see them again; hopefully they will be back around in 2018 or soon after.

For photos from the Lords of Acid show at Double Door, click here

For a video clip of Lords of Acid live in Chicago, click here