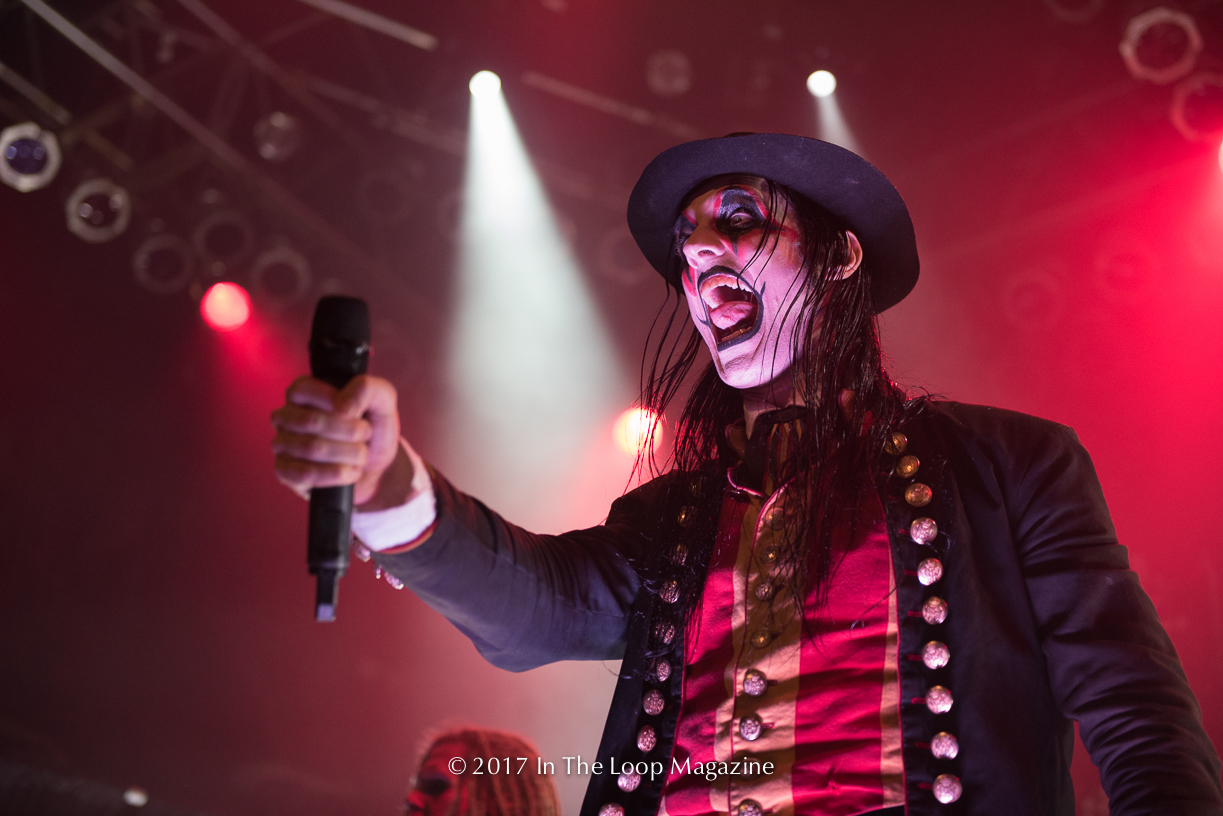 Ladies and gentlemen, boys and girls! Get your horns in the air and keep them there! Avatar is an incredible Swedish metal band from Gothenburg, Sweden. Early carnations of the band saw numerous members come and go, but John Alfredsson  (drummer) continued looking for the right guys who had the same passion for metal music. John Alfredsson and guitarist Jonas Jarlsby formed the band Avatar in 2001. At that time, they were in separate bands and decided to combine their talents on a new project. They have persevered though all the tough times and continue to take over the metal world one continent at a time. Rounding out the band are Johannes Eckerström on lead vocals, Henrik Sandelin on bass and backing vocals and Tim Öhrström on guitars and also doing backing vocals.

House of Blues was where the crowd got to see Avatar play its first ever show, in Chicago on Monday and Tuesday nights respectively. Like many others in the crowd I have seen Avatar play many times before and I was just as excited as the crowd to see them open the night! Even though they only had time to play a short 7-song set, they definitely brought all their charisma and energy as they do every time.

The crowd gave a huge roar as the house lights went down and as John walked onto the stage and motion to the crowd to cheer even louder. The band started the night with their title song “Hail The Apocalypse” from their 2014 album. Arms were instantly outstretched in the air and the headbanging began as soon as the first drumbeat hit. And once Johannes began to sing, the whole crowd sung along with him. The floor of the venue shook like a major earthquake hit.

Editors Note: For an opening act, the house was almost completely packed. And this was an early show. The first night started at 5:30PM with a 7:00PM start the second night. That’s hard for any band to pull off. Even with an extremely shortened set and a fraction of the normal set production, they packed the house and kept them wanting more.

Not wasting any time they kept up the intensity with “Paint Me Red”. The crowd broke into a frenzy as our ringmaster of the evening got the crowd pumped up with his amplified movements and freaky facial expressions. Johannes’ mannerisms are intensified by his “clown” face paint. The idea for the makeup first came to life for the “Black Waltz” music video. For Johannes something clicked seeing the face paint for the first time and the band has been running with it ever since. Adding to the makeup, the band is decked out in circus attire.

As the band swung their hair in a whirlybird fashion, the crowd followed them banging their heads. There was no reason to simply just stand around and watch the show. You were forced into the pit. Johannes expected the crowd to jump during the song “New Land”, which they happily obliged. This was one of the many opportunities to participate showing our worthiness since we were standing on the border of Avatar country. Putting horns in the air goes along with every great metal show and Johannes wanted to see that throughout the concert. When there was a lack of symbolic metal call to arms, he was quick to notice and called everyone out to get them up again.

Avatar gives one of the greatest live concerts by today’s standards. Their setlist is complete with songs to sing, jump, scream, move and mosh to. I put them up in the same category of bands that I have seen live give superior performances including: Alice Cooper, Black Sabbath, Rage Against The Machine, AC/DC, Ghost, Rob Zombie, Metallica and Guns N’ Roses. Collectively, we did’t want the night to end. I did hear many people booing when Johannes said that they had one song left. The only thing we could do at the end of the show was to see them again, which I definitely plan to do, since they said they will be back again soon. Be sure to see this band when they come to your town and take advice from them, “Spread the darkness, spread the plague.”