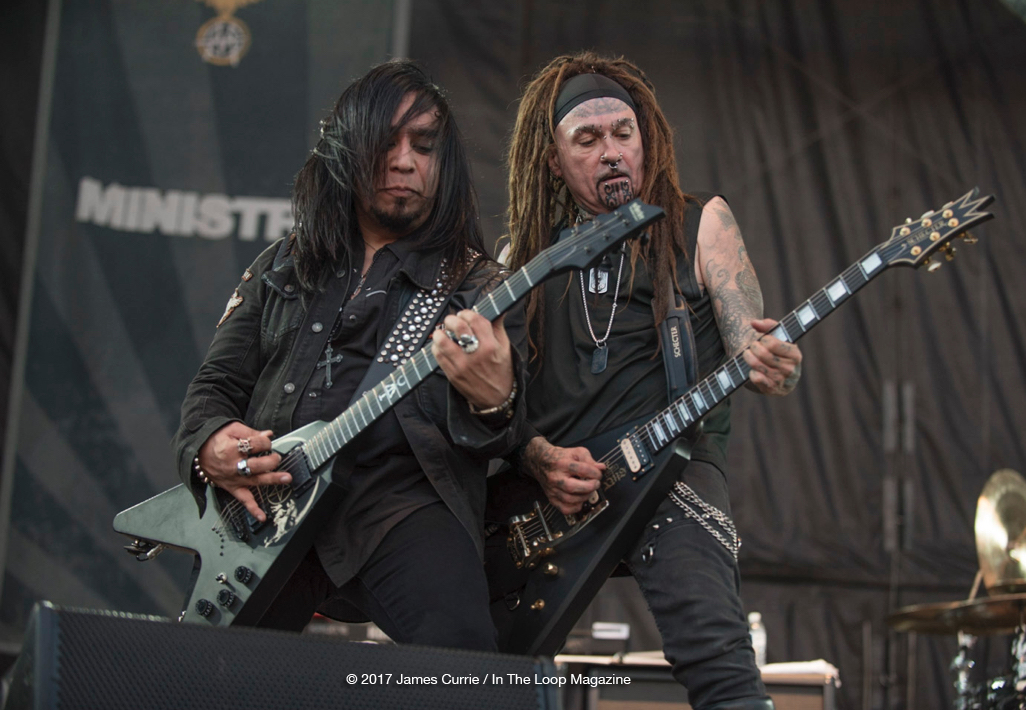 Originally conceived as a true anarchist answer to corporate fests like Lollapalooza, Riot Fest grows more corporate in presentation every year from its humble Congress Theatre beginnings but at least the lineup always brings us some ‘non corporate fest bands’.

True variety is what makes Riot Fest original: punk, rap, power pop, metal, industrial, new wave and everything in between. Friday brought a heavy electro-industrial vibe with the dream worthy trio of Ministry/New Order/NIN. Not to be out done, before the keyboard heavy trio started, the Buzzcocks laid down the challenge of the days best band provide an energy filled set.

After a fairly pedestrian set from Death From Above, Ministry was next to the main stage. Coming out of the door blazing with the track ‘Psalm 69’, Ministry set the tone for a blistering (and not just from the hot heat of the setting sun) set that told the Chicago crowd ‘we’re back, and this is our town!’. What followed was a variety of tracks from the bands 30 plus year career. The New track ‘Antifa’ is, subject-wise, ahead of its time seeing that it was written months if not a year ago and details the leftist protest groups efforts. But Al Jourgensen is always a step ahead as a student of politics and news. The crowd exploded into various moshpits for the classic ‘Thieves’ near the end of the set and the closer ‘So What’ kept the energy going ending an all-to-short set as Al and the boys seemed ready to play for another hour. Big props to drummer, Roy Maygora, who over the past year, has really gelled nicely with the band.

After the scorching set by Ministry, New Order brought the new wave electro love with a dance filled set of the hits. Fresh and fun, New Order seemed to embrace their role as the elder statesmen of the scene even ending with the spawning band, Joy Division’s, ‘Love Will Tear Us Apart’.

Combine Joy Division/New Order and Ministry and what do you get? One might say Nine Inch Nails! Sound wise for sure and Trent Reznor actually took a minute to acknowledge that it was ‘intimidating to follow two of his biggest influences.’

Nine Inch Nails took the stage to nearly full field at Douglas Park. Architecting a set is an art, Trent had a great flow of soft/loud, fast/slow… the band is razor sharp and just trounced through a set that covered new and old. One diversion was a heartfelt cover of David Bowie’s ‘I Cant Give Everything Away’ – calling it a ‘way to process losing his friend’ Trent actually sounded like Bowie as the song cascaded over the west side greenery. Nine Inch Nails has become a band that can headline any fest, anywhere in the world and fit in. It’s a testament to their constant evolving tone that still respect their industrial roots.

Day one of Riot Fest is in the books, put day 2 and 3 on notice: the bar was set high.

For photos from Ministry at Riot Fest 2017, click here

Setlist for Ministry live in Chicago at Riot Fest 2017:

Setlist for New Order live in Chicago at Riot Fest 2017: