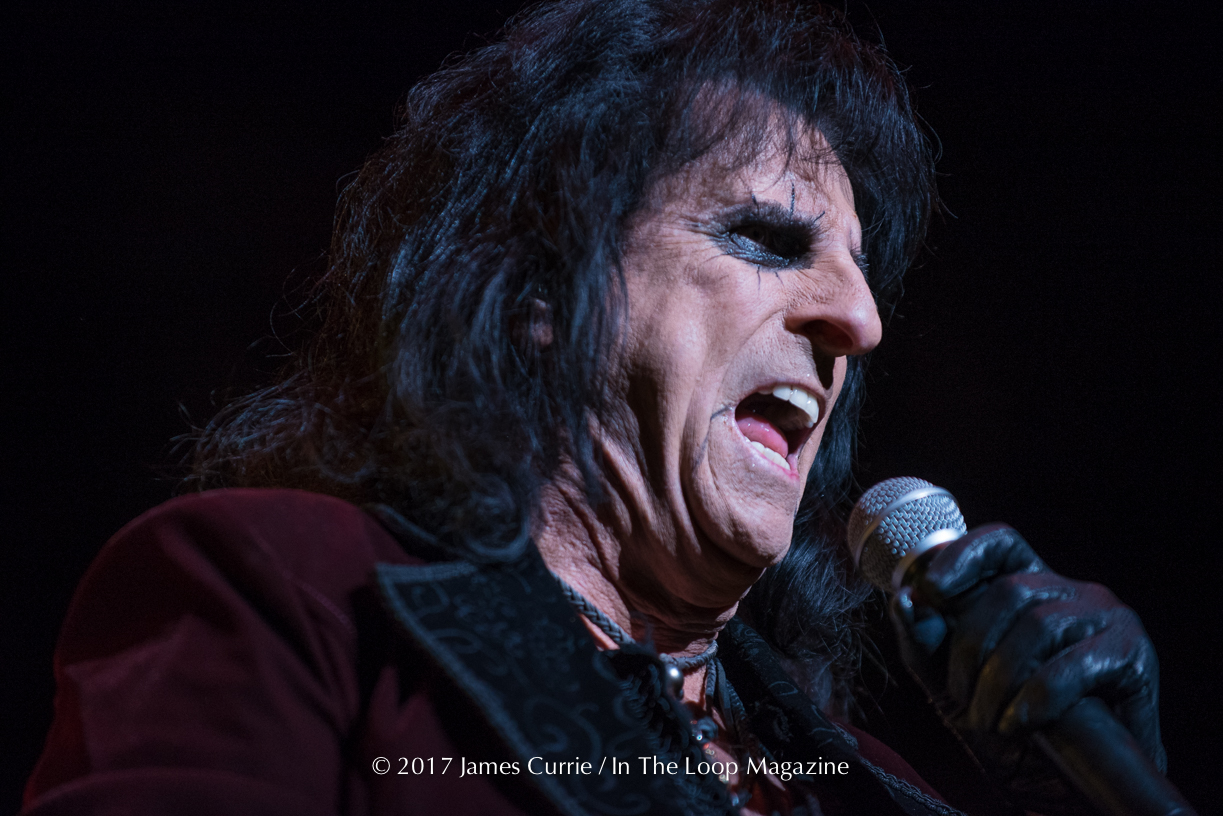 Alice Cooper and his band brought another outstanding rock/vaudeville show to the stage! I am not saying “another” as this was just some concert to stand and watch. This was a complete testament to what you can complete with passion and dedication. This was my sixth or seventh time seeing Alice Cooper and each time I find myself singing to every song and being completely captivated with everyone’s performance.

The night started with an audio intro and huge cloth backdrop to cover the front of the stage. Once the backdrop fell, it relieved Alice’s creepy stage setup and his band kick into the opening song “Brutal Planet” under a shower of sparks that came from the rafters. There was a roar from the crowd as Alice Cooper walked to the center of the stage shrouded in his black cape cloak like Nasferatu hovering into place. Wasting no time, since this was a shortened 14-song opening set, “No More Mr. Nice Guy” was next on the list that got the crowd more into the concert.

“Paranoiac Personality” the first single from Alice Cooper’s latest album Paranormal that came out just last month, made its way onto the setlist and fit perfectly. The song is about a guy who admits to having a paranoid personality and who is going to keep it, because he likes it. The song is actually upbeat as strange as that might sound.

“Woman Of Mass Distraction” transitioned into a Nita Strauss’ guitar solo giving time for the band to take a break. Nita definitely has the talent to be known as one of the greatest guitarists to perform on stage as she commands during her solo. “Poison” brought the band back together as the crowd sung, cheered, screamed and brought out the iPhones. After “Halo Of Flies” drummer Glen Sobel and bassist Chuck Garric had their time on stage together doing a duo as they progressed into an all out jam, without Alice.

Alice donned a bloody lab coat for “Feed My Frankenstein” and called out for Igor to wheel out the mad scientist contraption. Putting on a gas mask, Alice got strapped to the device as it billowed smoke and began to arc with electricity. Alice disappeared to the amazement of the stage handlers and an enormous Frankenstein/Cooper character rushed onto the stage finishing the song to the cheers of the crowd.

Another great progression between songs was during the ballad “Only Women Bleed”. A goth-like, wind up toy ballerina, played by Alice’s wife, emerged from the toy box and began dancing on stage. During the song she tried to choke the singer with the chains on her wrists. She quickly met her fate at the climax of the song as Alice fought back beating and “stabbing” her in the stomach with a knife. This leads into the guillotine being brought onto the stage to give him his own demise for his crime. Cameras again instantly went up as the crowd wanted to film the now infamous, “beheading”.

The set ended on a high note as all Alice Cooper shows do with the crowd pleasers of “I’m Eighteen” and “School’s Out” mixing in a little of Pink Floyd’s “Another Brick In The Wall”. Even though this was not a headlining set, I definitely was not disappointed by any means and I will be at the next show when Alice comes to town!