Founding Fathers (and daughter) Of Dark Wave Bring New Incarnation, Poptone, To The Masses in Chicago 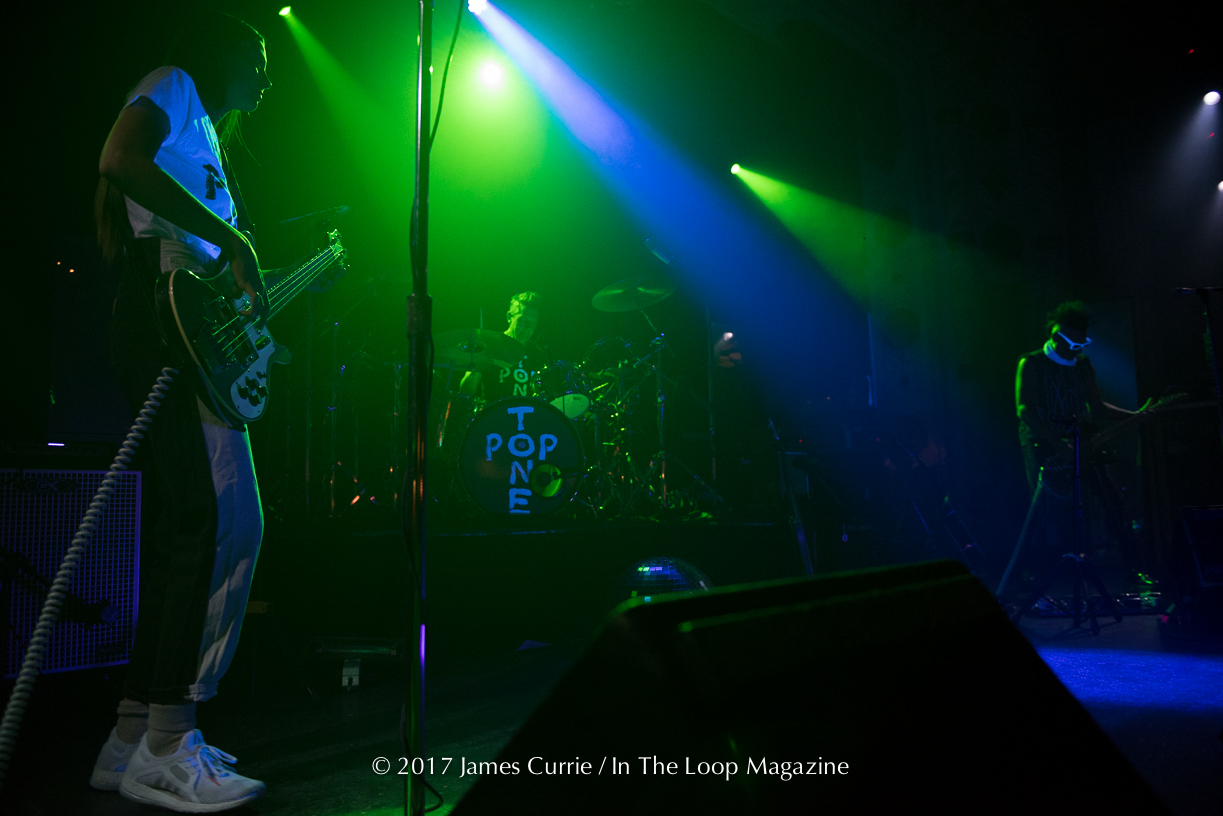 Poptone took the stage at the Metro for an exciting set that covered material from Bauhaus, Tones on Tail, and Love and Rockets. The band is composed of guitarist Daniel Ash and drummer Kevin Haskins, the founding members of the aforementioned bands and the founding fathers of the goth music scene and what would become the alternative music boom in the early nineties. Joined by Haskins’ daughter Diva Dompe on bass, Poptone began touring the country earlier this year and have since enjoyed a great reception from hardcore Bauhaus and Love and Rockets fans at many of their shows despite playing mainly Tones on Tail material. As a fan of Bauhaus and Love and Rockets, I was a bit dismayed entering the show knowing I would not hear “God in an Alcove” or “No New Tale to Tell”. In fact, I was extremely dismayed at the emphasis on Tones on Tail, which, in my pre-Poptone show mind, remained an experimental stop-gap curiosity. Happily, the decision to opt for Tones on Tail paid off, for when the show got underway it proved to be an epic revival and exploration of material unheard live since the eighties.

Opening the show was a band called the Trance-Farmers, a punk-rockabilly outfit led by the singer, Dayve Samek that played material from their albums, Dixie Crystals and For Whom the Scarecrows along with selections from their various EPs. While their music was good, Samek’s voice was a hodgepodge of soul, country, and rockabilly that did not mesh well. It switched between sounding pleasantly soulful during some songs and a grating rockabilly screech on songs such as “Garbage Night”. Furthermore, the band itself consisted of only two people, with Samek on guitar and a woman who provided a disinterested set of backing vocals and an equally bored tambourine. The rest of the band, such as the drums, bass, and rest of the backing instrumentals came from a music or karaoke contraption, leaving Samek to mime his way energetically through the set. There were times when he would stop playing his guitar while the music was still going and then begin playing again, with the sound of his guitar almost indistinct from the music belting out from the machine. At the end of their set, several people in the crowd became furious. One man even shouted, “How about they bring the rest of the band next time!” Indeed, I could only imagine how great they would have sounded had there been an actual backing band.

Before Poptone entered the stage, I thought I had seen everything up until that point. I had seen Will Sargent hammering the chords to “The Cutter”, Jim Reid storm through “Blues From a Gun”, and Eugene Hutz hurtle along “Start Wearing Purple”. I thought I had seen and heard everything. However, when Poptone appeared in a wash of ultraviolet light and lit in neon glow along with the brutal, mohawk silhouette of Daniel Ash, I knew I was in for a show to beat them all. I was not wrong. The set opened with an explosive rendition of Elvis’ “Heartbreak Hotel”, with Ash’s riffs turning the classic into a snarling vicious masterpiece. All the hesitation I felt about hearing Tones on Tail disappeared as soon as “OK This is the Pops” began soon after. What I pegged as just a groovy pop track at my first listen became a funky dance anthem when I heard it live. Everybody was dancing including me. One man however, tried to start a mosh pit, pushing and ramming into people until another man brutally shoved him into another part of the crowd where he quickly disappeared. But then right after “Pops”, came “Movement of Fear” at which point Ash let go of his guitar and began to play the saxophone. Thereafter, it was one fantastic Tones on Tail and Love and Rockets song after another, with Bowie’s “Cracked Actor”, a badass take on Adam Ant’s “Physical (You’re so), and also Bauhaus’ “Slice of Life” included in the set.

What was most remarkable was how Poptone alternated between Tones and Rockets material to a point where the difference between the two bands became almost indistinguishable with each song flowing seamlessly into each other. However on one hand I would argue that Poptone was a Love and Rockets band with a liberal dash of Tones on Tail. Indeed, the Love and Rockets songs, while not the entire focus, were definitely the most memorable moments of the show and functioned as the anchors to the set, songs able to get a rise out of the crowd.“ Love Me” was easily the best song from the set owing to its muscular, chugging groove, Haskins’ booming drums, Diva’s deft bass, and that awesome crash after Ash sang “And the beat goes on”. On the proper hand however, the Tones on Tail material also yielded the equally memorable “Performance”, a punchy, relentless dance anthem that bore traces of New Order and Kraftwerk. The song “Go”, Tones’ great smash hit, also crackled and sparked like a live wire. However, the question of whether I preferred Tones on Tail or Love and Rockets, is immaterial. Poptone put on one of the best shows of the summer and was a dramatic return of one of the most iconic acts in music history.

Hearing the sound of those iconic riffs and booming drums throughout their set, I could not help but think this show was history made manifest. Poptone gave everybody in the crowd the opportunity to rediscover a somewhat obscure part of a rich, ongoing musical legacy. Furthermore, time had not slowed down Ash or Haskins. Ash still bristled with swagger on his guitar and sang with the same energy from his time with the Tones and Rockets while Haskins’ drums still possessed that dark gravity which cemented the reputations of all three bands. In fact, one of my friends pointed out how he was relieved to see Poptone as opposed to a reunion of Bauhaus or Love and Rockets. Surprised, I asked why he thought so. “Because,” He said, “Then I would have had to see them at a bigger venue and paid more for the ticket. This way, I’m able to see them in a small, more intimate space and also I’m hearing stuff that hasn’t been played live in almost thirty years.” I couldn’t argue with that logic.

It is said that Poptone was formed in a moment of divine inspiration after Daniel Ash fell asleep and later woke up to the sound of Motorhead’s “Ace of Spades”, which he took to mean as a sign to pick up his guitar again and start playing. If that is the case, then Lemmy’s spirit deserves all the thanks and praises for Poptone. Nobody who is into post-punk gothic music should miss Poptone. After seeing them at the Metro, I look forward to their future releases for they are a band poised to build on a rich musical legacy.

Setlist for Poptone live in Chicago at Metro July 9, 2017