Nick Cave And The Bad Seeds At Auditorium Theatre 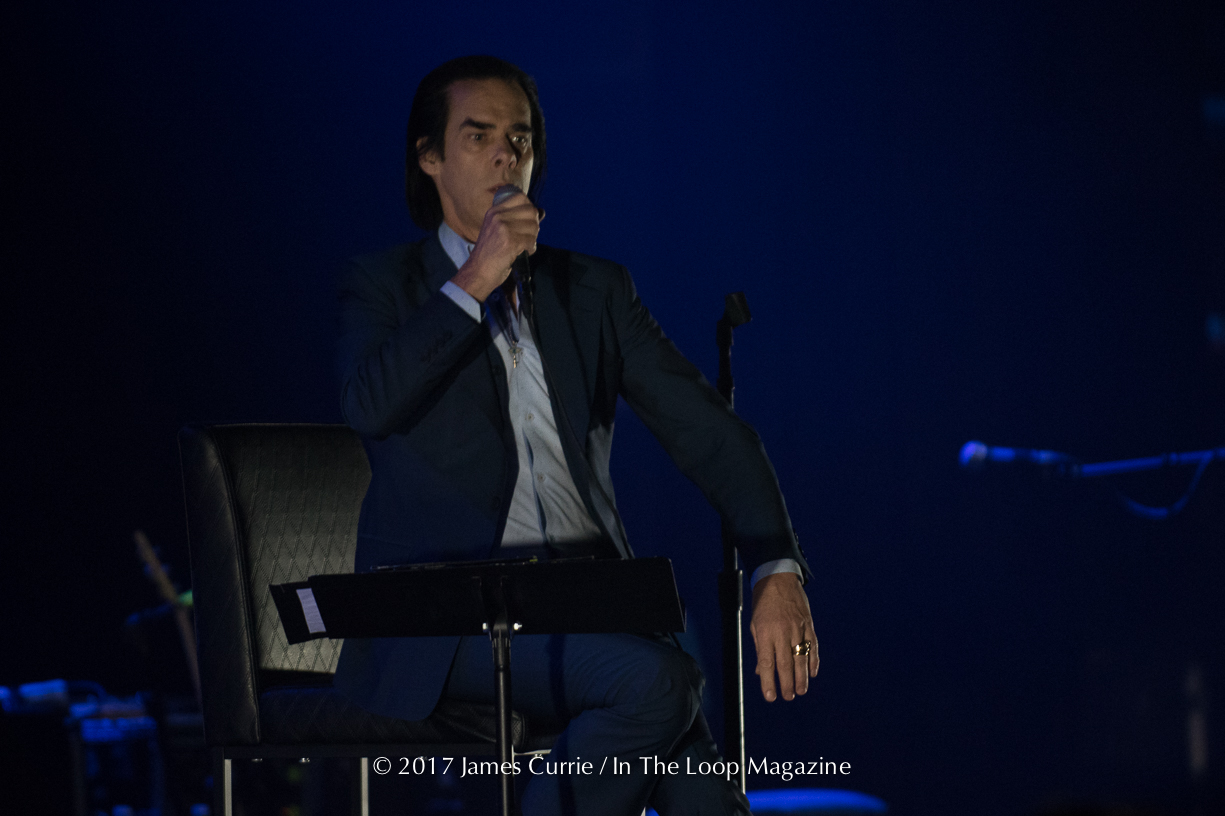 The bad boy from down under brings his ironic perversions to the antiquated halls of the Auditorium Theatre where a sold out room takes it all in stride.

Of that classic line up, he remains the sole original member, but has several long time bandmates like Martyn Casey (Bass – 1990), Warren Ellis (Multi-Instrumentalist – 1996), Thomas Wylder (Drums / Percussion – 1986) and Jim Sclavunos (Multi Instrumentalist – 1994). They’ve also gained a couple new hires in the past couple years with the addition of George Vjestica (Guitars – 2013) and Toby Dammit (Keys an Hammered Instruments – 2015). Together, they made a memorable night at the universities grand hall. Each incredibly talented musicians that bring something unique to the Bad Seed sound through violins, effect processors, vibraphones, mellotrons and more.

The show started with low lights and a single chair center stage to which Nick Cave strolled out to. The Bad Seeds already lined up behind that focal point. He walked up to the front row, greeted the house and seated himself next to a music stand with his material. They begin with the dark and low toned “Anthrocene” and from there developed into a production akin to a master story teller giving chase to a movement.

Cave, in his now classic appearance, dawns a slender black suit and open collared shirt reminiscent of a Vegas lounge singer, croons his fans like only he can. He gets up from his chair, lunges himself into the front row of open armed fans and demands their adoration. Cave flails around like a deranged rag doll thrown from an open car window cruising down I-80 at 65 miles per hour, bouncing from front of stage, to a piano, to deep into the belly of the house. At a couple points Cave left the stage and walked through the thick crowd to the center of the auditorium. Pulling and tugging at his still wired mic to get him through. He stagers over chairs and people taking higher ground and belting out tracks like “Jubilee Street” and “The Mercy Seat”.

His audience interactions, stage presence and passion reverberate throughout the ornate auditorium. Cave seems to draw his energy from the very walls and sucks the essence out of each human he comes in contact with. One of which he pulls on stage during Stager Lee. A larger man seemingly to fit the roll of the character in the song as he yells lyrics at him, “Fat Boy!” as well as bringing a couple female fans up as well. He uses them as interactive live props. They all dig it.

Highlights came from the encore where Nick Cave and the Bad Seeds really amped up the energy levels. Cave again jumps into the audience but this time drags a few more members back to the stage with him. And it didn’t stop there. He invites the entire floor to join him on stage at which at least half partake. He literally commands them to sit, dance, be quite, body slam and scream and shout with them. When the song was over, he seemed a little disoriented and stumbled to say, “I’m not really sure what to do now?” as he looks at all the people taking up his space. Seemingly total chaos.

They end the night returning to the tempo of the beginning. Slow and focused on his words of wisdom. “Push The Sky Away” was repeated, everyone swayed in unison and Cave pushed his way through the over crowded stage and exited stage right. The Bad Seeds played on and finally ended with their exit as well. The fans on stage at this point erupted in applause and exited back down into the auditorium to leave.

The best way I can describe seeing this show was like being a child again and sitting in class while the teacher gathered everyone in a circle for story time. The tale began with a slow, quite reading that ramped up into a wild frenzy and back down again. He was the master storyteller, all though clearly not children’s tales. Hell, not safe for work!

This was one of the most intense shows I’ve ever seen. Going from one extreme of emotion to the other in two hour time frame was manic in itself. You didn’t know what to expect next. It left you a little uneasy and startled. It was a mix of live theatre, a multimedia exhibit and live music all in one.

For more on Nick Cave and the Bad Seeds, including the current tour and album release, click here