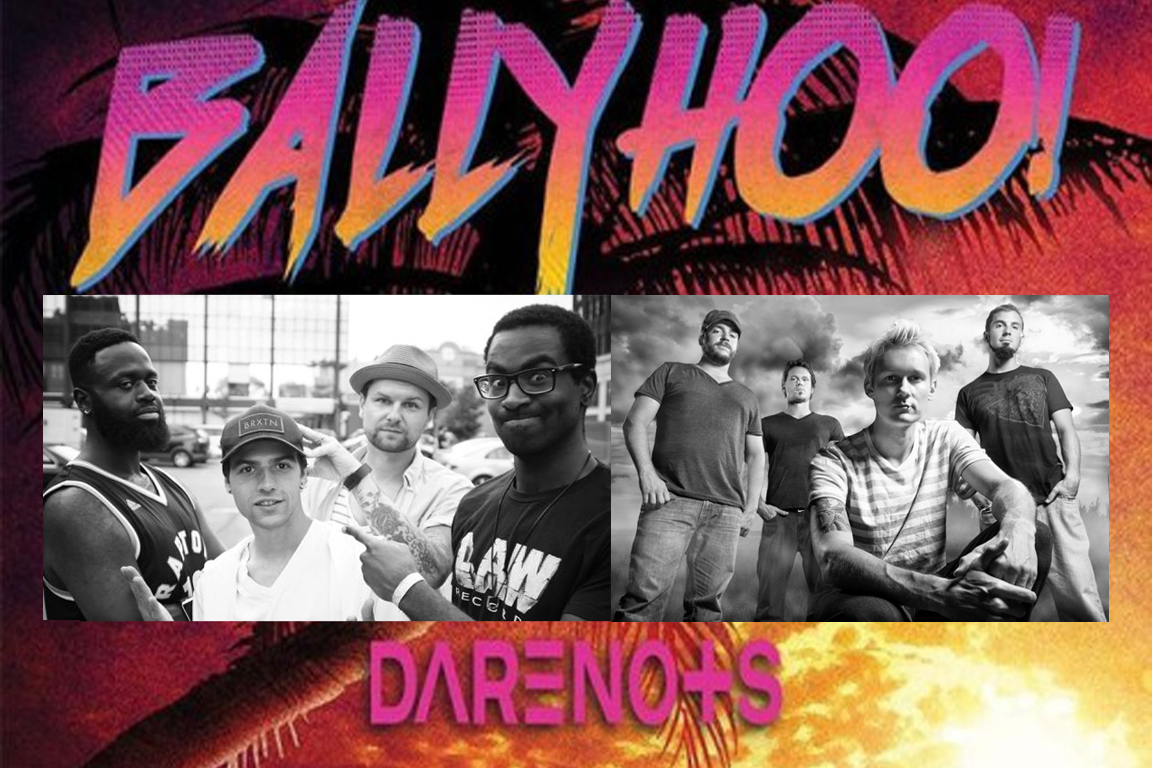 I first heard of the Darenots from Yesod Williams of the band Pepper. I am so glad he told me about them. I started listening to them and instantly fell in love with their upbeat style. They created a great combination of reggae, rap, rock, electronic music and dub and put it together on their debut EP, The Now Is Truth. The meaning behind the EP’s title is about “the moment you are living in right now…all you have is the now.” One of their greatest inspirations is Bruce Lee and “the now is truth” is a direct quote from his book Striking Thoughts. You can hear their high energy throughout the whole 7-song EP, especially on the standouts of “Good Good”, “Heavyweight”, “911” and “Focus To Faded”.

Darenots are from Toronto, Canada and formed in 2015. They consist of CJ Hinds on guitar and vocals, James Mascola and Rev on vocals and Swav Pior on drums. Rev and Swav went to high school together. Swav and CJ are in another band together called illScarlett. As the joke goes, they guys found James by “swiping right” and decided he was the one. Darenots have performed with Dirty Heads, Through The Roots, illScarlett, USS, Walk Off The Earth and others.

Darenots kicked off the Girls Summer tour supporting Ballyhoo! as they opened the night with “Heavyweight”. They showed why it is one of their party anthems as they jumped up and down on stage quickly getting the shoulder-to-shoulder crowd excited. They definitely did not slow down and kept up their intensity as the audience interacted and responded with cheering and singing with the band throughout their set. Darenots did an excellent cover of Blur’s “Song 2” getting the whole crowd responding “Woo-hoo” in the appropriate spots during the song with our arms in the air. They ended on an intense high note with the song “Fortunate”. I always enjoy a concert where the band makes the crowd feel like they are a part of the show. Swav, Rev, CJ and James were definitely appeared to have a great time on stage as they were smiling with sweat dripping down their faces.

I am sure they got a bunch more fans since this was their first time playing in Chicago. I saw a few people talking to the band and telling them they that were awesome on stage and loved the energy they brought. The Darenots are a great group of guys who also took the time to take photos with people who asked for them, myself included.

I am looking forward to hear what they come up with next. I can picture it is going to be an awesome combination of their influences with maybe a few other feature collaborations. Their great crowd interactive skills are going to help them grow and develop more followers. Put the Darenots on you list if you want to see not only just a fun band, but also a bunch of great guys!

Beat Kitchen was the scene for the opening night of Ballyhoo!’s Girls Summer Tour. Ballyhoo! formed in Aberdeen, Maryland in 1995 when they were in high school. They released their debut album 365-Day Weekend in 2000. Since then they have been busy releasing 5 albums and have opened up for 311, Dirty Heads, Slightly Stoopid, and Tribal Seeds among others. The band consists of Howi Spangler (lead vocals/guitar), Donald Spangler (drums), Scott Vandrey (keyboards and turntables) and Nick Lucera (bass).

The band opened their set with “Jameson & Ginger” the first song on the Girls. album. This was a great song to start off with and get the crowd excited. Girls. has not been out for that long, but it already shows signs that the album is going to sell a ton of copies. Ballyhoo!’s fans have always known them to be a fun party band and this night was a testament to that. Ballyhoo!’s set was filled with a nice combination of songs that spanned their catalog mixed in with a nice variety of songs from their latest album; including one of my favorites “One In A Million”.

Being around the music scene as much as they have Ballyhoo! once again knew how to select an excellent setlist meshing together slowed down songs with their up-tempo ones giving the crowd a nice variety. Throughout the night I saw people swaying, jumping and cheering to their favorite songs. Giving the crowd an instant shot of excitement Howi, Nick and Scott would take their spots on top of the light-up risers that were at the front of the stage. They hyped up the crowd jumping up and down as they motioned to the crowd to give them more. The audience responded by singing at the top of their lungs to “Blaze This Weed”, “Cali Girl”, “She Wants To Destroy Me” and “Last Night” to name a few. After thanking the crowd for coming out, the band only got a few feet onto the main floor before the whole room chanted, “Ballyhoo! Ballyhoo! Ballyhoo!” and got them back on stage for a 2-song encore.

Ballyhoo! proved they have the drive to keep touring and putting out great songs. Their fan following gets bigger the more I see them. They definitely love what they do and it shows how they interact with the crowd while they are playing and meeting the crowd after the show. The band is constantly playing plenty of shows throughout the United States. If you do not catch them at one of the upcoming festivals or in another state, I am sure you will find them back in Illinois at some time. They are a great band playing fun songs for everyone!

12. She Wants To Destroy Me