The Flaming Lips Keep It Weird At The Riviera Theatre, Host Massive Party Disguised As A Concert 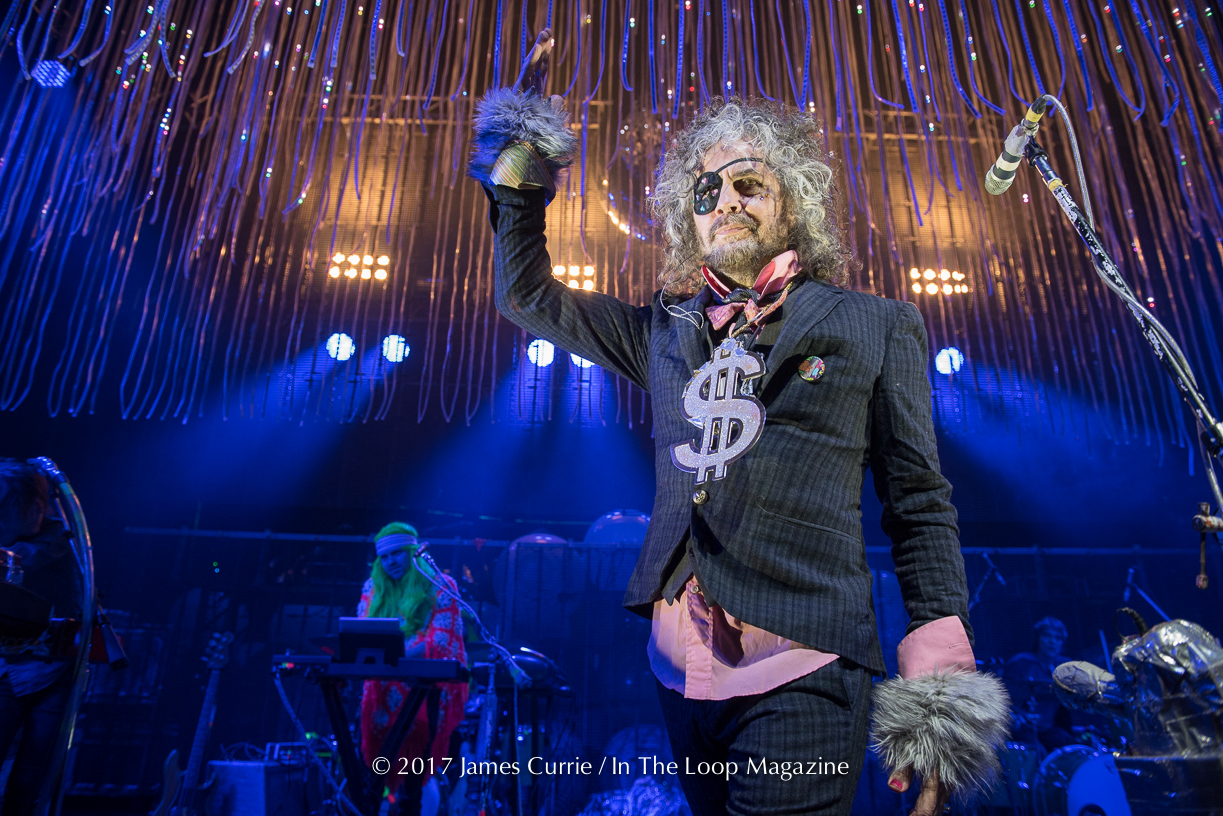 The Flaming Lips hosted one of the wildest parties ever witnessed at The Riviera Theatre in Chicago last night. Wayne Coyne and his band of merrymen prove they’ve still got what it takes to be weird, in the coolest way. “We want this to be the fucking most insane party that we could ever have.””Never ever doubt the power of the rainbow.” – Wayne Coyne.

This is a band in their 34th year of existence. Most bands at this point tend to put things on autopilot and let it ride. Not the Flaming Lips. This band doesn’t set out to be unique, they just are. Since the beginning, way back in 1983, they created a sound and vision that no one else has captured. A totally original band from Oklahoma City creating fun tunes and lively shows.

One of the first Flaming Lips shows I saw as at a small college outside of Chicago. It’s was around 1993-1994. At that time they were getting their first real exposure to the mainstream with the album “Transmissions From The Satellite Heart” and their first commercially viable hit, “She Don’t Use Jelly” a 120 Minutes and college radio classic. This after ten years as a band already. Their stage show at the time not what they have today, but still totally the Lips style, only on a much smaller budget. Back then, it was Christmas lights wrapped around their equipment on stage. Glowing to the beat of the songs. Last night, they brought out all the toys including riding a unicorn through the audience.

You knew you were in for something special when you walked into the main hall and saw giant inflatable mushrooms adorning the sides and a stage loaded with more decorations and lights than the Rockefeller Christmas tree.

The lights dimmed and the stage was a neon blue glow. A giant mirror ball took center rear stage. And when I say large, I mean the biggest one I’ve ever seen. It must have been the size of a VW Beetle. It was hoisted in the air and nestled between a slew of dangling LED lights hanging like digital spaghetti strands. Behind it all was an LCD panel wall displaying videos, shapes, lights and more. The band was seated along the bottom of the stage. Half the members on one side, another half on the other. Wayne Coyne conducting from front and center, not just the musicians, but the effects and lights too.

As soon as the first song started, so did the party and it never stopped until the music was over.

Three to four foot multicolored inflated balls flew out from the stage blanketing the entire floor. Confetti cannons spew little bits of colored paper from the upper balconies down and front to back. No one was safe from its cyclonic wrath.

Fog machines blew thick clouds of smoke. Scented air puffs saturated the great hall. The volume of the amps shook your body to its core.

To witness a live performance of The Flaming Lips is liken to an acid trip with a few hundred of your closest friends. You feel welcomed, warm and safe. You can’t help but sing along and dance. Partly because Coyne commands it. He feeds off the crowd as much as we do the experience. He calls out and makes you join in. They scatter words on the back wall screens. The room shouts in unison to songs like “Do You Realize” and “The Yeah Yeah Yeah Song”. All this coming from the man in green monster slippers, a giant gold dollar sign neckless and parka on.

You’ll never catch anyone looking at their phones or watches to see what time it is. There’s just too much going on. It’s too engaging and entertaining. Coyne keeps the show alive with giant two story rainbows, inflatable 9 feet characters dancing, a light show that Pink Floyd would be proud off and as mentioned before, Wayne riding out on a winged unicorn through the entire lower floor of the venue. Singing “There Should Be Unicorns” spreading more confetti and shooting laser beams across the room.

Coyne told stories, shared history bits, engaged with the fans and made it personable. He pointed out people in the crowd with his duct taped spotlight. The band was tight and somehow stayed in groove amongst all the controlled chaos that is a Flaming Lips show.

This is entertainment. You get a show, not just a concert. Endless smiles and dancing filled the floor. These fans came to party. The Flaming Lips delivered.

For more on The Flaming Lips, including the current tour, click here

For photos from the show at the Riv, click here

Setlist from the Flaming Lips live in Chicago at The Riviera Theatre: