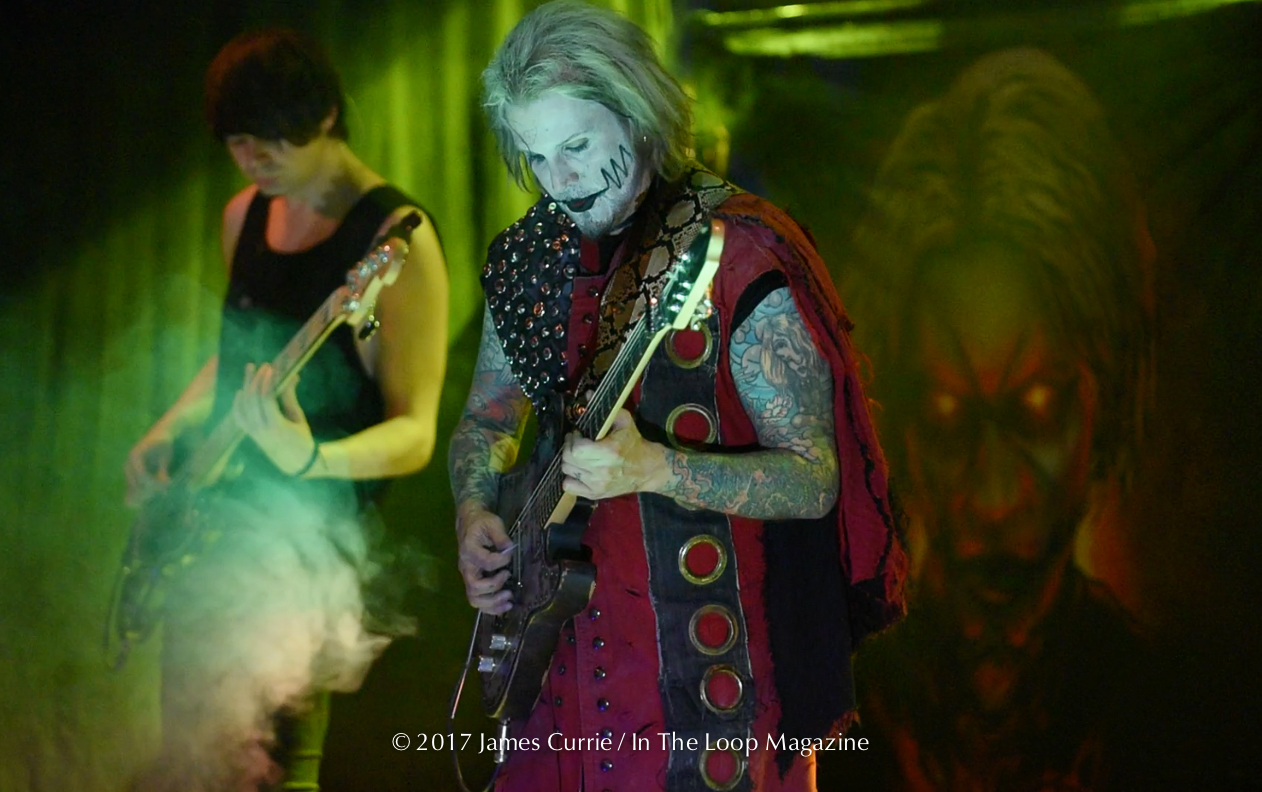 John 5 and The Creatures closed the Season Of The Witch tour at Reggie’s Chicago on Sunday. John 5 (John Lowery) has been around the music scene for many years notably playing with David Lee Roth, Marilyn Manson and Rob Zombie. While not on tour, John has contributed to a number of bands in and out of the heavy metal scene, while also putting out 7 solo albums. His latest solo album ‘Season Of The Witch’, which this tour supports. He picked up the guitar at age 7 and his love for playing was shown through his diverse noodling on the instruments he played on stage. John 5’s bandmates showed their own music dedication and skills with their expertise playing. Ian Ross, a La Grange Park Illinois native, on bass and Logan Miles Nix on drums.

The shoulder-to-shoulder crowd was patiently waiting for the band to take the stage. Cheers erupted when we heard the first notes played on John’s Telecaster and got even louder as he walked to the middle of the stage and stood on a metal riser. He had his signature white face paint on with a jagged black line drawn on both sides of his mouth and a flashing neon light in his mouth. The band opened the night with the song “Guitars, Tits and Monsters” from the ‘Season Of The Witch’ album.

Over the years, I have seen John 5 play with Marilyn Manson and Rob Zombie, but I have never had the chance to see him play with his band and I am glad I finally did. Everyone in the crowd, myself included, cheered and was captivated as we watched him shred. John made it look effortless as he made his hands dance on the neck of his guitars. Ian and Logan did an awesome job rounding out the sound in the venue playing fantastically. Bouncing from style to style, the audience could hear the country influence in the song “Jiffy Jam” and the influence of the television show ‘Hee Haw’, that he watched with his dad, in the song “Hell Haw I.G.R.” Being mostly a heavy metal crowd, everyone was still intrigued during these slower tempo songs. We could tell that John was enjoying and appreciating his time on the stage as he was smiling and interacting with us. Towards the end of the show, they covered Michael Jackson’s song “Beat It”. They also jammed together for a few minutes giving us an Easter present. John 5 stated that he does not like how his voice sounds on the microphone, so he hardly talks during his shows. Whether he was having a great time tonight or it was the last of this happy 36 show tour, John talked a little more. Not knowing what to say, John showed his humble side not taking for granted his life experiences. John being the gracious person he is, thanked Ian and Logan for being a part of the band, the crew for their dedicated hard work and us for attending the nearly sold out show.

The end of the night came with a medley of songs that spanned genres and generations. Each of them sounded excellent and were played to perfection. John 5’s varied skills match his collection of guitars he plays on stage, including the fan’s favorite laser guitar. This 3-piece instrumental band was definitely a joy to see and they kept the crowd entertained throughout the nearly hour and fifteen minute set. I am definitely looking forward to the next time John 5 and The Creatures come to town!

For photos from the John 5 and the Creatures show at Reggies, click here

Setlist: John 5 and The Creatures live at Reggies Rock Club in Chicago April 16, 2017