YouTube Sensation, Dan TDM, Brings His Live Show To North America For The First Time Ever 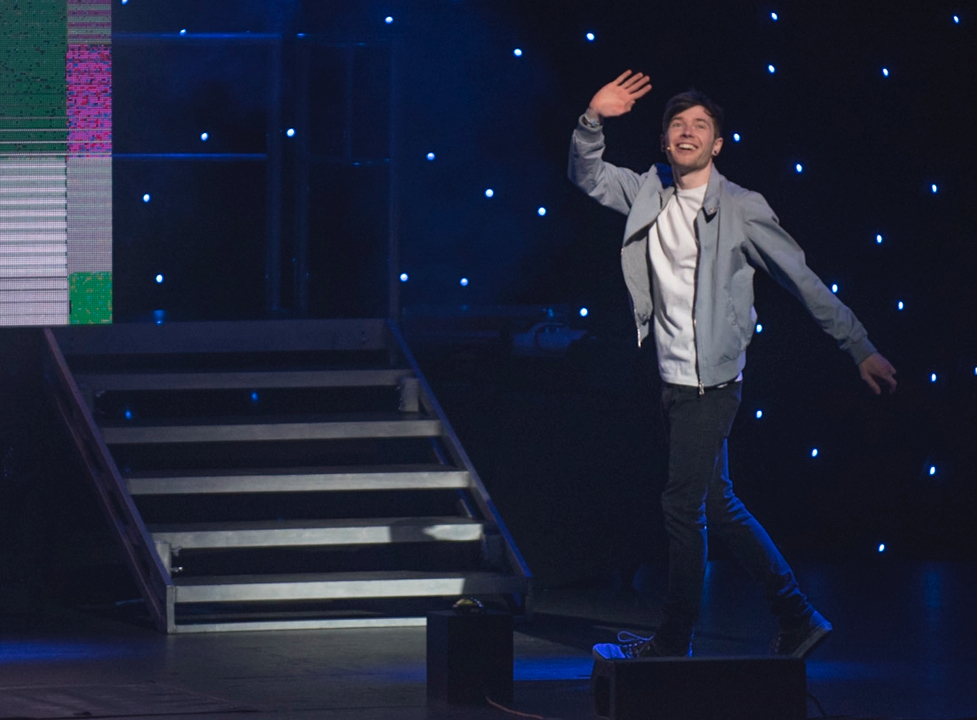 Dan TDM (The Diamond Minecart) was on stage at the Rosemont Theatre in Chicago for the first time ever. I was there with my dad in the front and center to see it all. There were lots of smoke and lights at this show including some lights of giant diamonds on the roof of the theatre. Dan TDM is my favorite YouTuber in the world.

There were a lot of people excited there. Especially kids. There was a giant countdown clock on the stage on a giant screen. When it got down to five minutes before show time, kids yelled, “WE WANT DAN! WE WANT DAN” and “TDM! TDM!” It got louder and louder the lower the minutes got. Finally the timer ended and the lights went dark. Dan TDM came running down to the stage and everyone went crazy!

Dan and his friend Eve got on stage and did science experiments, jokes, songs and more. The problem was, Dan’s friend Dr. Trayaurus, accidentally created an evil twin character named, “Evil Dan”. Evil Dan interrupted the show and caused problems. He was mean to Dan and his friends. He did very bad things, but I can’t say them all because Dan TDM asked us not to tell too much about the show. He wants to keep it all a secret and surprise for others who haven’t seen it yet.

Basically, Dan and his friends have to deal with different stages of game playing from Evil Dan, to try and save his pugs, Ellie and Darcy who Evil Dan dog napped. So they played the games Evil Dan challenged them too like “Pugs of Doom”, “Blocks of Doom” (my favorite one) and the final boss battle, “Doom of Doom”. Throughout the show, he got the audience involved. He played giant games and asked the kids to come up and play with him. Everyone raised their hands and shouted, “Pick Me, pick me!”. He also got the whole audience involved with more games, singing songs and silly trivia. The show got really loud sometimes with all the kids yelling, screaming and singing! I had to plug my ears. So did my dad.

The show made me feel really excited. It made me love video games even more and I wanted to go play right away. There was a game called, “Draw Stickman”. I’ve heard Dan played it before. It was cool because you get to draw something and it comes to life and plays in the game. I love to draw and write books so this was a great thing for me. Another part of the show that was really cool was when Dan holds up a cell phone and does a live video stream on stage and then walks backstage and we get to see it. Something really crazy happens to him again but I won’t tell you though. You’ll just have to find out yourself.

When it was the half time of the show, everyone took a break. I went to the bathroom and to see all the Dan TDM stuff for sale out front. Then my dad and I made a YouTube video right outside the room we just saw DTM in! A personal one just for Dan!

I really got a good feeling from going to see Dan TDM live. I feel like I know him even better than just watching him on YouTube at his home in London. You don’t have to be a fan of Dan TDM or Minecraft to like this show. I would say it’s for boys and girls ages 6 and up. I’m almost 9 by the way. My little sister even watches Dan TDM videos with me and she’s only 4. She really likes his pugs and thinks they’re really cute.

I don’t want to spoil the rest of the show because there is way to much cool stuff going on and like I said, Dan asked us to keep things a secret. I would definitely recommend going to see Dan TDM live. Save your allowance and birthday money because it’s worth it!

After all that, we left. I smiled all the way home and for the rest of the day. I just couldn’t believe it. I saw Dan TDM live and it was such a fun show. This was the best day ever!

For more on the Dan TDM Live show, including the tour and his YouTube channel, click here