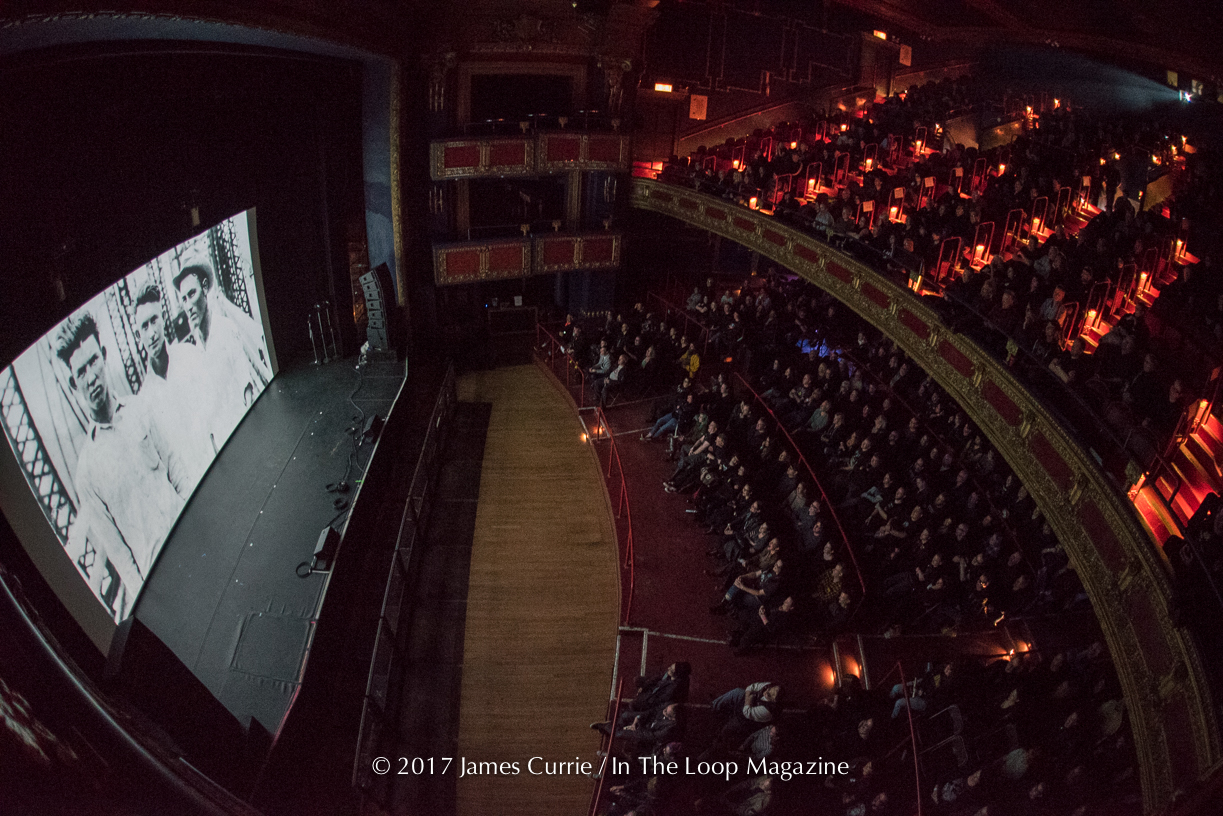 This weekend saw a revival of sorts from the legendary industrial music record store and label, Wax Trax! Records. The former Lincoln Park hard hitting, industrial-dance / electro-punk music promoter and hit maker has been brought back from the abyss from a natural champion of the brand and daughter of co-owner Jim Nash, Julia Nash. The events kicked off Friday (fan dubbed: Wax Trax! Weekend) with shows spread throughout the north-side neighborhoods starting with Jello Biafra (LARD + Dead Kennedys) doing his “Incredibly Strange Dance Party” DJ set at Liar’s Club, David J (Bauhaus + Love and Rockets) DJ Set at Late Bar and Richard and Patrick (Front 242) spinning at Berlin the night before the main event, the premiere / test screening of the documentary, Industrial Accident: The Story of Wax Trax! Records.

Julia Nash and her husband, Mark Skillicorn took on a project that, at the time, was almost unachievable. They decided to make a movie about the life and times of her family business and friends in the Chicago industrial music industry. The problem was, they are not movie makers. Julia works in the medical industry and Mark a graphic artist, but that didn’t stop them. After almost a half a decade of working at it with the help of other creative individuals like Jason Novak (Cocksure – Wax Trax! Records only modern record release), Shayna Connelly and even her daughter Olivia (keeping it a multi-generational family affair) finally revealed their masterpiece. And after watching it twice, I truly mean that. This was a story that was literally 40 years in the making and ready to be told.

“Industrial Accident” was a surprise hit with me and the hundreds of others who attended the two sessions at The Vic Theatre this Saturday. I mean, we knew it would be educational and hopefully entertaining, but it was much more. It had people laughing and crying, bopping to those Wax Trax! beats and reminiscing about a time gone by. It flowed extremely well. Hit on all the right points. Pulled on the heart strings and brought to light family stories not known outside of the Wax Trax! circle.

I’m not going to give to much away, too many details or even major plot line as this is still technically considered a “work in progress”. They are taking the input from friends, family, co-workers and the fans and will make slight edits where needed. And from what I saw, there really isn’t much to do. I did notice one interview scene with Julia that was soft focused that could be corrected as it was a little out of focus. Then they will be taking it out to film festivals in hopes to get distribution and get it into the mainstream film circuit. From there, a home video / streaming media release and possible soundtrack. About the soundtrack, it’s amazing. I personally am looking forward to this. Maybe we’ll get a couple deep cuts along with a greatest Wax Trax! Records greatest hits. Double disc?!

The movie had interviews with many of the artists that made the label what it became. Artists like Al Jourgensen, Chris Connelly and Paul Barker all of whom seem to make up about a quarter of Wax Trax roster with bands like Ministry, Revolting Cocks and Pailhead. Groovie Mann (Former Wax Trax! Records employee by the way) and Buzz McCoy of My Life With The Thrill Kill Kult, Trent Reznor (Nine Inch Nails & 1000 Homo DJ’s), Steve Albini (Big Black), Sasha & En Esch (KMFDM), Richard and Patrick (Front 242), former employees, other venue and label owners and yes, even Dave Grohl makes an appearance to name a few.

Besides all the great interviews, there were lots of personal films, concert and studio videos and photos, lots of photos, to make this a true documentary with feel. As we learned through the Q&A sessions, Nash and Co. literally save history from a barn to make this happen. As she put it, it was as if someone packed up the store, loaded it up into a truck, delivered it to a remote local barn and stacked it up as it was in the store seemingly lost to time. “Even the record bins were still loaded with vinyl and Jim and Dannies homemade dividers cards”, Nash said during one of the sessions.

They even had an artist merchandise booth set up. A mini pop up Wax Trax! Records store. Classic logos everywhere, iconic bands that made there name through the Wax Trax! Records and new trinkets to tease the most loyal fans. Even some of the presenters had merch available like something from Lead Into Gold, David J and Front 242. Something more to go with the VIP gift bags of posters made just for this event, t-shirts and of course getting everything autographed upstairs during the artists meet and greet. Tables lined the back wall and everyone from the panel dissuasions and more signed autographs and took photos with fans. A collectors dream.

The visual quality of the film is right up there with any recent documentary. The images were clean and clear. The audio was crisp and banging. The lighting, scenes, edits, graphics and flow all looked and worked brilliantly. This was not a student film. Julia and Mark pulled together an incredible team to make this happen. And this was the second attempt. The version we saw was not even the original one. The first one was apparently scrapped and they started over completely. I’m sure they learned a lot from the first one. Maybe they had a small private viewing at one point and people said, “No, no, no, this can be much better, try again.” Whatever happened to that first one doesn’t really matter because the one we all saw was on point and worth the wait.

This was a movie about the family ties and relationships it built as much as how those artists made Chicago the industrial music capital of the world. Wax Trax!  was a record store and label that was made for music fans by music fans. Jim and Dannie saw a need and want for this music and they brought it with a no holds bar approach. They had the vision to bring it all together under one roof. They put their all into everything they did. It was a passion and expression of their lives and community they help developed. Even though Jim and Dannie very much disliked the word “Industrial”, they helped launch the careers of many artists in that genre and had the respect of them all.

The Q&A panels “Talk Is Cheap” were slightly different as well and not just because the panelists were different (besides Groovie and Julia), but the first group seemed more reserved. Not as many questions asked. Not all the panelists spoke or got into the discussions. The ones that did, Jello at the first one and Richard 23 at the second, told stories, were animated as large as their namesake and kept the interest going. Julia was straightforward, thoughtful and gracious. We learned a lot from the short stories they shared and got the inside scoop on what life was like in the Wax Trax family.

The moderators were completely different as well. The early moderator, I believe a XRT DJ, was great. He was reserved but kept the discussion moving. He asked the right questions and seemed to keep the session going. He knew the panelists, the music and this history. The late moderator was not as good. He didn’t seem prepared or maybe he was a little tipsy or a little of both. He asked questions most already knew about the panelists and the history. Some questions were just answered in the film we all just saw. The audience could be heard mumbling after some questions he asked. The guy next to me said, “Who is this dude and why is he up there?” Maybe his missed the movie or his infinity scarf was too tight. Groovie wasn’t happy with him either at one point during the interview saying, “Whatever, next question” after that moderator tried arguing with Groovie about his own life and times.

What really made this a great experience was viewing the film in this environment. The seating, the sound system, the location all helped. This was the perfect place and time to make this happen. The Vic Theatre, AKA The Brew and View, is a classic Chicago venue for a film about Chicago music and culture. The audience reactions put everything in perspective. I have to say, the early screening audience was a little more responsive to the film, but the late screening Q&A audience was more active and engaged. The earlier screening audience laughter was louder and more often. Someone shouted out at the screen, “I love you Dannie!” during a specific montage. You could hear the sniffles from holding back tears.

All in all, this was a great weekend of events. The Dj sets brought back the sounds that made so many of us get up and dance back in the day. The visuals to accompany those hit it home even further. The movie was extremely well done. It’s still hard to fathom this was made by a couple novices. It just proves that with the right group of people helping out, a great subject matter that is personal and touching, along with time, patience and the right learning experience can really produce something amazing. It’s not all about money, flash and the Hollywood backing. Industrial Accident: The Story of Wax Trax! Records proves it. If it’s this good at this stage, I can’t wait to see the final product.

For now, if you missed this viewing, you’ll have to wait. But let me just say, it’s worth it. What started out as an idea for bonus footage to a live concert DVD (Retrospectacle: 33 1/3, 2012) has grown to a full blown feature film. One that Julia, Mark and everyone else involved can proudly say they made. Check out their website for future updates and release info. Let’s hope this spawns more Wax Trax! Records releases and events.

Click here to view the promo trailer for the movie

For more on Wax Trax! Records, the documentary and future happenings, click here

For photos from the early panel session, click here

For photos from the late panel session, click here