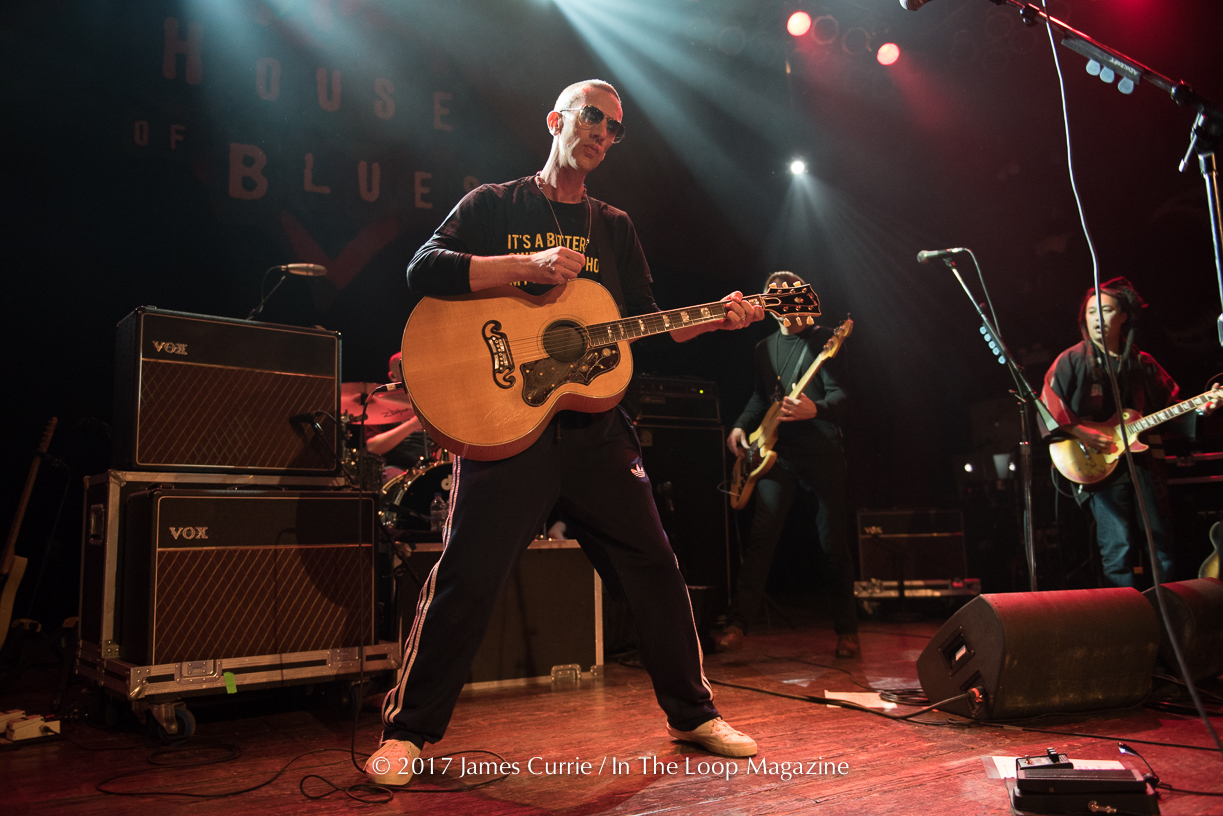 When I entered the House of Blues on a cold and wet spring night, I was surprised at the sheer number of eager faces gathered together inside, and even more so at the legend who was about to grace the stage. That legend was and still is Richard Ashcroft, former captain of the Verve and one of the most tempestuous figures in rock history. Richard Ashcroft, the colossus who brought about the seismic shift of Britpop from the volatility of the “Madchester” scene of the Smiths, the Charlatans, and the Stone Roses to the more introspective, elegant, and lush sound heard in Oasis, Embrace, James, and early Coldplay. Ashcroft, the titan who weathered drugs, alcohol, two band breakups and emerged as an enduring icon on par with Ian McCulloch and heck, even Mick Jagger. Richard Ashcroft, the only man who could walk onstage on a Thursday night at the House of Blues in nothing but a long-sleeve/-t-shirt combo, Adidas trackpants, and sunglasses, only to deliver one of the most electrifying shows I have ever seen.

Before entering the stage, Ashcroft and his band were supported by the local band, American Cosmonaut, who delivered a rather tepid set. Tepid simply owing to the band’s inability to chart a readily identifiable musical identity. At times, their music bore some strong shoegaze influences, however towards the end of their set, the music descended into the type of rock music heard everywhere. Despite the negative impression, American Cosmonaut nevertheless delivered a set that interested the crowd and even had me tapping my foot along. Of their songs, “Mellow” proved to be somewhat memorable, but in the end the shift from their shoegaze opening towards a more conventional rock sound was disappointing. Encountering them in a smaller venue perhaps would have yielded a better impression. Nevertheless, the crowd warmed to their music and remained respectful throughout their set.

After the American Cosmonauts finished, Richard Ashcroft took the stage amid a din of cheers and clapping. He sprang onstage with the agility of a leopard and opened the show with the first song “Out of My Body” off of his most recent album, “These People”. The track was a punchy dance number that, in my opinion, proved to be the best choice to open his fantastic set. Despite his formidably large body of work from the Verve and his solo career, Ashcroft instead drew from only “These People” and of course, the iconic “Urban Hymns”, ordering the songs in his set so that high-energy songs were balanced by slower, more brooding songs like “Sonnet”. The result of this was a set filled with truly memorable moments during songs such as “They Don’t Own Me” and “Lucky Man”. The former being the song I remembered the most owing to the sheer power of Ashcroft’s vocals, his absolutely masterful band, and of course, the slow, volcanic march of the music.

Furthermore, several songs were punctuated by impromptu jamming between all the members of the band. The solo guitarist, in particular, tore up every solo and the drummer stormed through his as well. At the center was of course, Richard Ashcroft who ran to each musician, either sitting down next to the guitar and bass or jumping on top of a speaker next to the drummer while they all played. Ashcroft commanded the band and during one moment, exhorted them to play louder and louder until his “mania” was quenched. But in the end, Ashcroft took his set all the way to midnight with a brilliant and explosive rendition of “Bittersweet Symphony”, giving the classic song its due and proving to the audience that his legend still continues.

Listening to stories of his lofty bearing, I expected Ashcroft to be like a younger Ian McCulloch, whom I saw when Echo and the Bunnymen played at the Metro. I expected to see a haughty artist with a large ego, disdainful of his band and of the audience. However, while McCulloch oozed with arrogance and spoke in a jumble of words, known to some as a Liverpool accent, Richard Ashcroft proved to be the polar opposite. As he danced and sang, I realized he was something better than Ian McCulloch. He was cool. With his Adidas swagger and indoor sunglasses that hearkened back to the old Manchester scene, the generosity of his cool was such that he made the audience last night feel that they themselves were cool for showing up at his show in his friendly banter between songs. In other words, when I saw Ashcroft, I understood his appeal and how he managed to become the icon he is today.

At the risk of waxing philosophically, Ashcroft and the Verve made having doubt, heartbreak, failure, struggle, loneliness, alienation and other aspects of ourselves we find humiliating, cool. In essence, Ashcroft made being human, with all of our thoughts and emotions, cool and when I realized that, it made his show at the House of Blues even more memorable and explained his legendary reputation. If you have the opportunity to see Richard Ashcroft and his fantastic band, go see them. You will not be disappointed.

For photos from the live show at House of Blues Chicago, click here