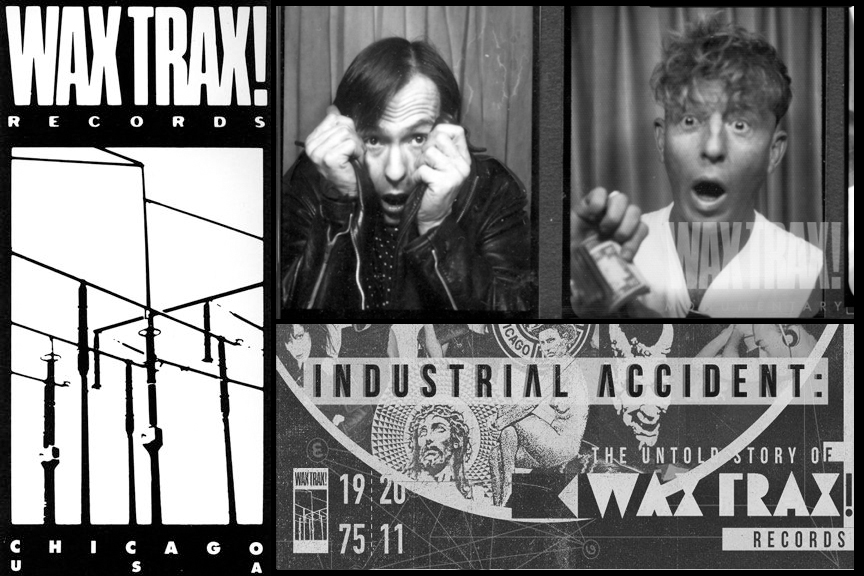 Chicago has been named home of many things throughout its one-hundred and eighty years as an incorporated city including home of the deep dish pizza, the Chicago hot dog, the city of big shoulders, the blues and one that this upcoming film will focus on, the Chicago industrial dance music scene.

This coming weekend, the first official Industrial music documentary focusing on the Chicago talent, industry, people and artists that made it legendary will make its premiere. Dubbed, “Industrial Accident: The Story of Wax Trax! Records”, this documentary will be about that Industrial scene created by the daughter of one of the founders of Wax Trax! Records, Julia Nash. Her father, Jim Nash co-founded the revolution with friend Dannie Flesher in 1978. Julia Nash brings us the inside scoop through her own personal experiences and interviews with the bands and artists that made it such an iconic label and scene. She did this with bands that she grew up around like Ministry, KMFDM, Pigface, My Life With The Thrill Kill Kult, Front 242, Revolting Cocks and so many others. Trent Reznor of Nine Inch Nails was around for several memorable moments and has said many times that this was one of the most important things to happen to music in Chicago since Chess Records and what they did for Chicago Blues.

This project started many years ago. It’s been a labor of love for sure. The main spark of interest to get this going for Nash was from the 33 & 1/3 Wax Trax! Records Retrospectacle anniversary concert held in 2011. This concert stemmed from the death of the last co-owner of Wax Trax! Records, Dannie Flesher. During this time, Nash noticed a lot of love from friends, family and fans of that scene. She decided to do something about it and make a documentary to honor it all.

This project apparently hasn’t been an easy task. It was started and stopped a few times throughout the years. There were legal and personal issues that came up that staggered the production. It’s been rumored that it was completed at one point then scraped only to start from scratch again. A Kickstarter campaign was launched just a couple years ago and money was raised to continue. Even a pop up Wax Trax! Record store appeared for one day only at the Metro. Fast forward five years later after its inception and we’re finally getting a feature documentary from Julia Nash and her husband Mark Skillicorn.

The industrial music scene is one that fans who follow it, follow it with fervor, love and devotion. This wasn’t just a fad in music. It was and is a lifestyle to so many. The reach of industrial dance music is global. Fans are everywhere. New music spread from this seed planted over 30 years ago.

So what can we expect from this documentary? We can assume the obvious, interviews with former bands and artists talking about what it was like back then making this music. We know we’ll see Al Jourgensen talking about recording and editing in the studios, talking about his friendship with the owners and hopefully a crazy inside story or two. Chris Connelly working in the record store on Lincoln Avenue and giving some behind the scene dish on making a RevCo album. And hopefully personal stories from Julia herself about her dad and what life was like growing up around that scene. After Saturdays premiere, we’ll know for sure as they have two scheduled previews lined up at the Vic Theatre.

This showing is a special event in itself. Nash, still a local Chicagoan by the way, will be showing the documentary to adoring fans and bringing in special guests who helped make it. These guest will be members of My Life With The Thrill Kill Kult, Front 242 and The Revolting Cocks and will all be in attendance for the viewing as well as panel discussions at the end. Nash plans on taking constructive criticism from the showing and making possible tweaks to it from the feedback she’ll get from the audience and others involved. Side note, Julia and her husband are not formally trained documentary film makers. Nash is a nurse by trade and Skillicorn a physical media artist. After which, they plan on taking it to film festivals.

So no matter the outcome of this production, it’s amazing in it’s self that it got completed. You can tell that it has been a true labor of love. This will be something personal. Something that took blood, sweat and tears to make. Nash obviously loved her father and that music scene. This will be something from the heart for the fans. Something her father and their lifetime friend would have loved. Now it will be our turn, the fans of the genre that keep this dream and genre alive. Besides the iconic music, this will be another way to make sure that the industrial dream never dies.

This weekend will be and industrial overload in Chicago. If I were mayor of Chicago, Saturday would be dubbed, “International Industrial Music Day”. There are so many things planned for not only the screening of “Industrial Accident: The Story of Wax Trax! Records”, but several satellite events including shows around town by Jello Biafra and David J.

For more on the screening on Saturday, click here