Amaranthe Bring Their Swedish Metal And Support To Chicagoland 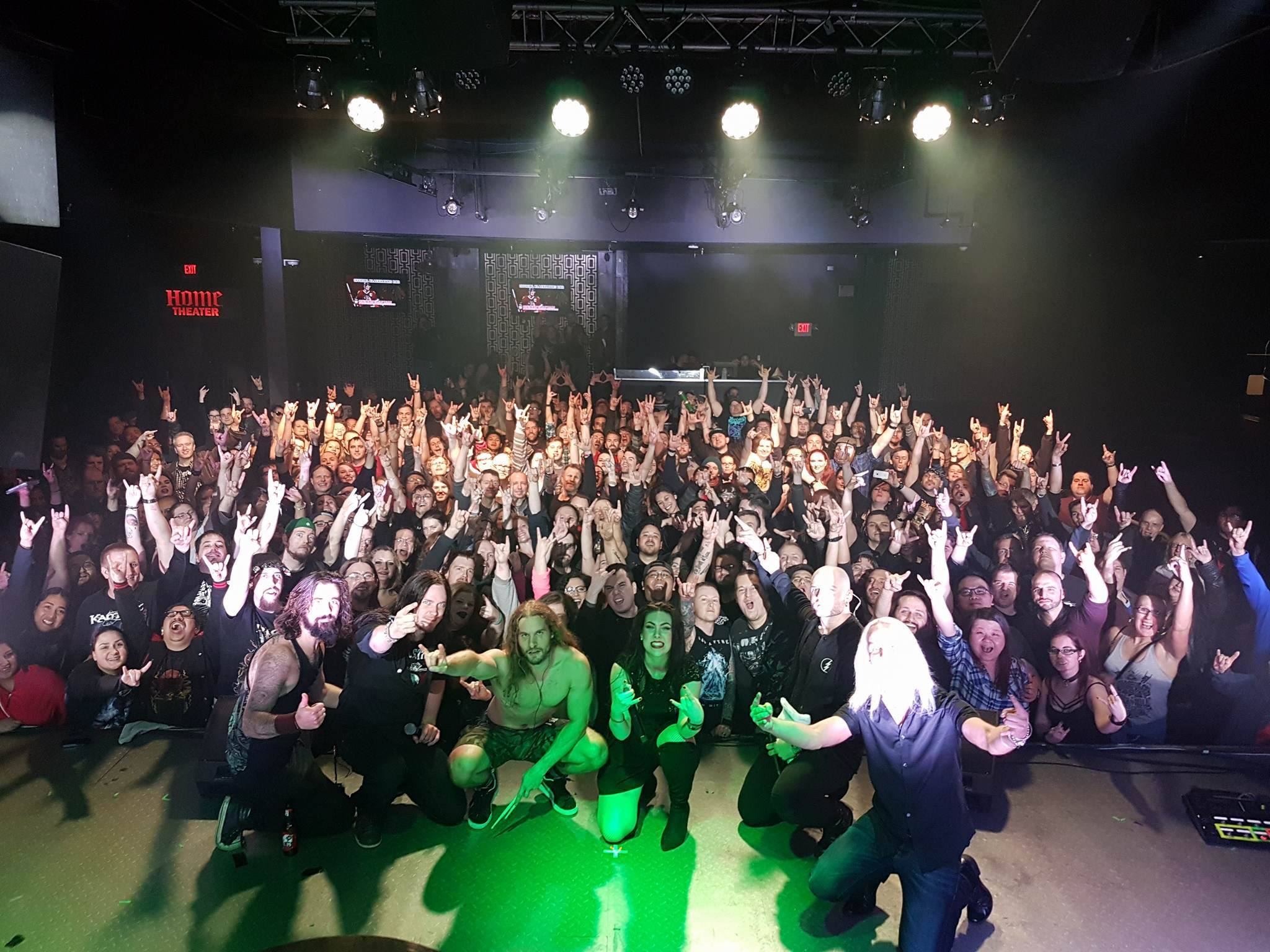 Chicago and the Midwest received a warm visit from Sweden’s own Amaranthe as well as alternative metallers, Smash Into Pieces recently at H.O.M.E. Bar in Arlington Heights. The night brought forth rather new experiences for both fans and the bands as the adrenaline and energy made room for plenty of memories and more.

Touring in support of headliners, Amaranthe and the Maximalism Tour, the night was kicked off by fellow Swedes’, Smash Into Pieces. Their first US tour ever, it made for a first of many historic moments to come. The group recently released their third album and were touring in support of, Rise & Shine. A unique and visually striking entrance launched the night off with the bands, ‘Apocalypse DJ’, appearing on-stage with his lit-up mask and delivering a message to the fans to warn them of the energy that is about to ensue. Seconds later the explosive track Turn It Down, kicked off with the rest of the band in high gear as they warmed up the midwest masses that night.

Usually not seen at metal shows, a scrolling marquee with amazing visuals was on stage displaying lyrics time to time as well as landscapes and more that created a surreal atmosphere. The remainder of the tracks played were also from their latest album which included Higher, Let Me Be Your Superhero, Animal and Merry Go Round. Their set closed off with a popular throwback, Disaster Highway.

The night couldn’t get more International when London’s, Cypher 16, graced the stage with their heavy hitting antics. A dire entrance was launched with the opening track, Whole Sea To Cross. What I believe took many by surprise was just how headbangable and how heavy these guys were; it almost got to a point where a mosh pit almost blew up but fans kept their cool. The group released their latest album last October titled, The Great Surveyor, and if you never heard the album, that night, this tour are the best opportunities of doing so as their entire setlist was straight off the album. In My Line Of Country and The Deep Six.

Lead man, Jack Doolan, commented halfway through their set about how great it felt to come all the way from England and be a part of such a great tour. The crowd was still hungry for more and the group continued the remainder of their setlist with Down A Level I and Down A Level II as well as the closing track of the night Before The Reign. Unfortunately all good things must come to an end as the group’s quick setlist came to a close for the night, though one thing is for sure, they were the heaviest of all the acts on the tour.

Of course majority if not all of the attendees at H.O.M.E. Bar were ready to experience maximal greatness with Amaranthe. With a suspenseful intro that gives you goosebumps down your spine, the headliners launched their list with the first track, Maximize, off their new album, Maximalism.

Highly energetic and almost danceable the group wasted no time in continuing their charisma and action with another catchy number, Boomerang. Greetings and thanks were in order as the group thanked everyone for coming out and got the crowds ready for some throwbacks which included their very first single, Hunger, as well as Invincible, 1.000.000 Lightyears, Trinity and True.

Drummer Morten Løwe Sørensen, guitarist Olof Mörck and screamer Henrik Englund Wilhelmsson launched an assault of metal with their aptly titled track, Fury. The atmosphere soon went 180 as lead woman Elize Ryd, took a moment to calm the metal masses with her latest ballad, Endlessly, in which she went above and beyond with her amazing vocal range. All eyes were on stage with intimate lighting set in place, it made for a mesmerizing performance. The night went full party mode as On The Rocks proceeded the tear jerking ballad as well as a jaw-dropping drum solo from Morten Løwe Sørensen in addition to playing older tracks like Automatic, The Nexus and another ballad, Amaranthine. Clean singer, Chris Adams, is pulling double duty on this tour as he fronts Smash Into Pieces as well as replacing former Amaranthe member Jake E., as he left the group late last year. This is the second Amaranthe US tour he got to be part of. He got the crowds to jump and give it their all on the final track of the night, Call Out My Name, or so that’s what people thought the last song of the night would be. He also exclaimed, “You know my first US tour ever was on Amaranthe’s last tour and I will never forget what I felt last time. Without a doubt, Arlington Heights is my favorite stop on this whole tour and I’ll never forget it.”

After an encore was in order with the fans chanting for more, bassist Johan Andreassen, came out on stage beforehand to deliver a realizing speech per se. As the band has been getting heat from certain folk for not playing “true” metal and steering away a bit from the metal scene, Johan made it clear that it’s not right to try and pigeonhole/label a band. He compared it to when you introduce someone who is of ethnic origin and or of color, you don’t ever point that out hence the band being poked for breaking down the metal barriers. They want to play whatever they want and as long as it sounds good, then they don’t care what anyone else thinks. As metal fans especially can be the most sensitive fans, it was time to get a reality check. With the encore underway, the night ended with Digital World, That Song, Dynamite and their smashing catchy track, Drop Dead Cynical.

After one photo with the band and the crowd, I think it’s safe to say the band had a wonderful time on this stop. Their energy and emotions proved so, as well as I think every band was thankful to be part of this tour. If you ever get a chance to attend an Amaranthe show, it will hands down be one the best decisions of your life. Cheers mates.