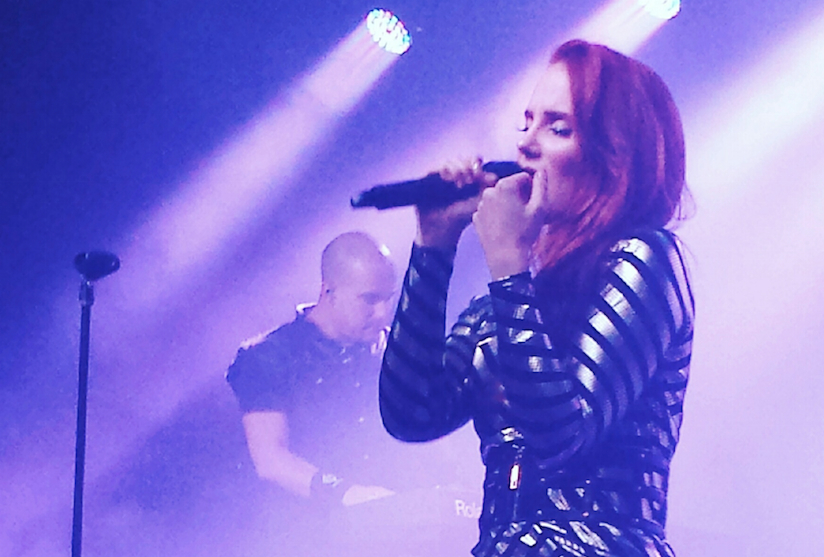 The Concord Music Hall experienced international greatness this past week when heavy metal from all over of the world gathered here in the windy city. Dutch metallers Epica are touring in support of their latest album, The Holographic Principle released via Nuclear Blast Records. Known as The North American Principle Tour, touring support came from Italian symphonic death metallers, Fleshgod Apocalypse, Russian pagan folk metallers, Arkona, and Canadian metallers, The Agonist. Metal from all over the world, here in Chicago for one night, truly a night no metalhead could have gone without.

Doors opened quite early for the VIP meet and greets and it wasn’t long before the fans flocked to the stage to experience the openers, The Agonist. A little tie in to home, current lead woman Vicky Psarakis, hails from Chicago originally so it was great to see a little local flair in the international chaos. Warming up the crowd with a great blend of tracks, mostly newer but one throwback as well, they opened the night with My Witness, Your Victim off their 2015 album, Eye of Providence. Vicky exclaimed how great it felt to be back in Chicago, though the group wasted no time in playing song after song. Of course as the group recently released a new album titled Five at the end of September, the set list was in favor of Five with other tracks from the album including The Anchor and The Sail, The Hunt and The Moment. Though it wouldn’t be quite complete without a little trip to the past with the track, Thank You, Pain. Ending on a high and headbangable note full of moshing, The Agonist, closed their satisfying setlist with Gates of Horn and Ivory.

With a quick set change, Russia’s Arkona, had no trouble in taking the stage and getting everyone’s attention, especially with the group’s unique outfits very reminiscent of a pagan folk metal setting, almost Tolkien inspired. The group is known for singing exclusively in Russian so song names let alone lyrics were quite a challenge to overcome. Arkona also were touring in support of their latest album, Vozrozhdenie. Lead woman Masha ‘Scream’, really got the crowd pumped while Vladimir ‘Volk’, also drew attention due to his wind instruments such as pagan flutes and windpipes. Originally a group I had underestimated, there was no denying that Arkona, gave Chicago more than it bargained for.

One of the main acts of the night, Italy’s Fleshgod Apocalypse totally decimated the crowds with their apocalyptic sounding symphonic death metal. Bringing in the operatic vocals of Veronica Bordacchini on board as well, her masked presence also added a touch of eeriness to the night. Also in support of their latest album released in February of this year titled, King, Fleshgod opened with the sinister and atmospheric opening track, Marche Royale and it immediately thereafter In Aeternum, ensued. Majority of the tracks were also from their latest chapter, with a throwback to perhaps their most popular track to date, The Violation. Aside from the group’s unmatched heaviness, lead man Tommaso Riccardi, did a phenomenal job of portraying such an evil figure, especially when reading scriptures from Dante’s Inferno before they went on and played another track as well as bringing out an ominous looking mask to represent their closing track, The Fool.

Of course the end of the night arrived and the headliners from The Netherlands, Epica, had no problem at all whatsoever in getting the audience’s full attention. With fog, special lighting, the whole works, the group also played an instrumental opener known as Eidola which was immediately preceded by their latest single Edge of the Blade from their recently released album, The Holographic Principle. It’s very rare to come across a band that is heavier live than in studio and on their actual album. They are no exception, as the night was full of headbanging, moshing, circle pits and just epic moments beyond comprehension. A generous blend of tracks from their new album as well as throwbacks, the midwest Epica fans definitely got more than a treat. Keyboardist Coen Janssen, known for his immersive antics kept up with his presence as her would move around the stage with his keyboard to the point of showing off his signature curved keyboard and walking up to the barricade and showing off his skilled techniques to the crowd.

Lead woman, Simone Simons, made somewhat of a political speech that night as the elections were also the same night and she made clear that no matter what the outcome is, if it ever came to it, we can ‘divide and conquer’. Not necessarily a rally speech, it made sense as the group played that same track, Divide And Conquer from the new album. Fans also were very much pleased when the group played Sensorium, a track from their debut album and also a track lead guitarist Mark Jansen claims they had not played in a very long time. Keeping with the condition of the world and how chaotic it can be, Unchain Utopia, was one of the tracks that led to their encore set, at least not before the group went on to play, Once Upon A Nightmare. Several minutes later, a chant for Epica to come back to the stage, a welcoming encore was in order. The final three tracks of the night included the hit Storm the Sorrow, Beyond The Matrix and the epic ten-minute track, Consign To Oblivion. Other tracks played in their set included, Universal Death Squad, The Obsessive Devotion, Quietus, Mother of Light, Ascension – Dream State Armageddon, Dancing in a Hurricane, and A Phantasmic Parade.

Overall, one of the better metal tours to hit the states and Chicago, European acts tend to come to the states once per album so who knows when any of these acts will return to the US. Hands down a memorable night, there were fans both new and old, who’ve seen these acts many a time and those who have never seen any of the bands. One thing was for sure, the metal community that night was strong, something rarely seen in the music industry overall.

For more on EPICA and current tour, click here