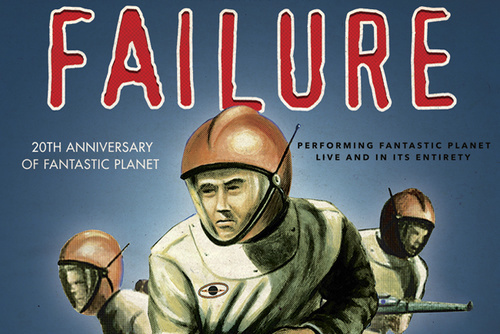 The current trend of artists playing albums in their entirety presents a double-edged sword for the die-hard music fan. On one hand, seeing an album live is very different than listening to an album, and often, it offers some insight into the body of work as a whole. On the other hand, sometimes certain songs aren’t played live for a reason, whatever that may be, and while it may be interesting to see a particular deep cut live, it might not be worth sacrificing something else that you really wanted to see live.

Then there are the rare albums that exist almost only in their entirety, at some level, the ones that are so complete as a body of work that seeing the whole thing from end to end is an experience entirely its own. Failure’s Fantastic Planet is one of those albums.

Currently celebrating its 20th anniversary, Failure arrived at Double Door in Chicago on Friday to play Fantastic Planet in its entirety, and while they’ve been liberally playing tunes from that record since their reunion in 2014, this is the first time they’ve revisited it as a whole. The result? Clarifying the fact that the band’s 1996 album remains one of the best and influential records of that decade, if not of all time.

Eschewing an opening act for a thirty minute intro film of movie clips influencing the record’s lyrical themes of space and isolation (which the band has noted as being metaphorical devices for the emotional and psychological trauma of drug addiction), Ken Andrews (bass/guitar/vocals), Greg Edwards (bass/guitar/piano), and Kellii Scott (drums) brought the record’s hits (“Stuck On You,” “The Nurse Who Loved Me”) as well as the deep cuts (“Pitiful,” “Leo,” numerous haunting instrumental segues) to explosive life.

“We had no idea that anyone would be listening to this record twenty years later,” Andrews mused at one point, pausing to hear himself over the jubilant capacity crowd.   For a trio, Failure make an unbelievably big noise, and Scott’s punishing drumming style is largely to blame for the sonic attack. As one of the pioneers of the ‘90s niche movement typically referred to as “space rock” – think shoegaze effects anchoring more accessible, radio-friendly rock – the subtle layering of effects on record were recreated perfectly by Edwards and Andrews, who frequently traded bass for guitar and vice-versa, with Edwards also taking to keys for certain songs.

And the songs alone hold up to anything in the current rock landscape. The four-chord crunch of “Pitiful” out-Nirvana’ed Nirvana even in ’96, and the three-punch of set opener “Saturday Savior,” “Sgt. Politeness/Segue 1” and “Smoking Umbrellas” were punctuated by a swirling mish-mash of visual effects that filled the back wall of the Double Door stage, giving an intimate venue the feeling of a much larger venue. (Indeed, the band’s stage-set on 2014’s Tree of Stars tour was more effective at Metro, thanks to the bigger stage), but staging wasn’t the main focus, as the hypnotic set-closer “Screen Man” (from 1992 debut Comfort) proved.

Failure exemplify the best elements of several styles–the alt-rock guitar avalanche of the 1990s, the spacey-intellectualism and lyrical nuance of Pink Floyd, the stark, playful electronic jabs that Andrews’ has continued to experiment with in his solo and other projects—and in doing so, have found a distinct sound that allows for both a recognizable structure as well as the ability to push the sonic landscape they’ve dominated for four records. Most bands would be lucky to release a record with twenty-year appeal at any level, and the fact that Failure are able to make Fantastic Planet sound as fresh as it sounded when it came out speaks to the strength of their collective vision, and one can’t help but think it bodes well for the band’s long-term future.

For more on Failure and this current tour, click here